How the GOP is winning the debt ceiling fight

Tea Partyers are wrong to squawk about Mitch McConnell's "cave." They should be cheering 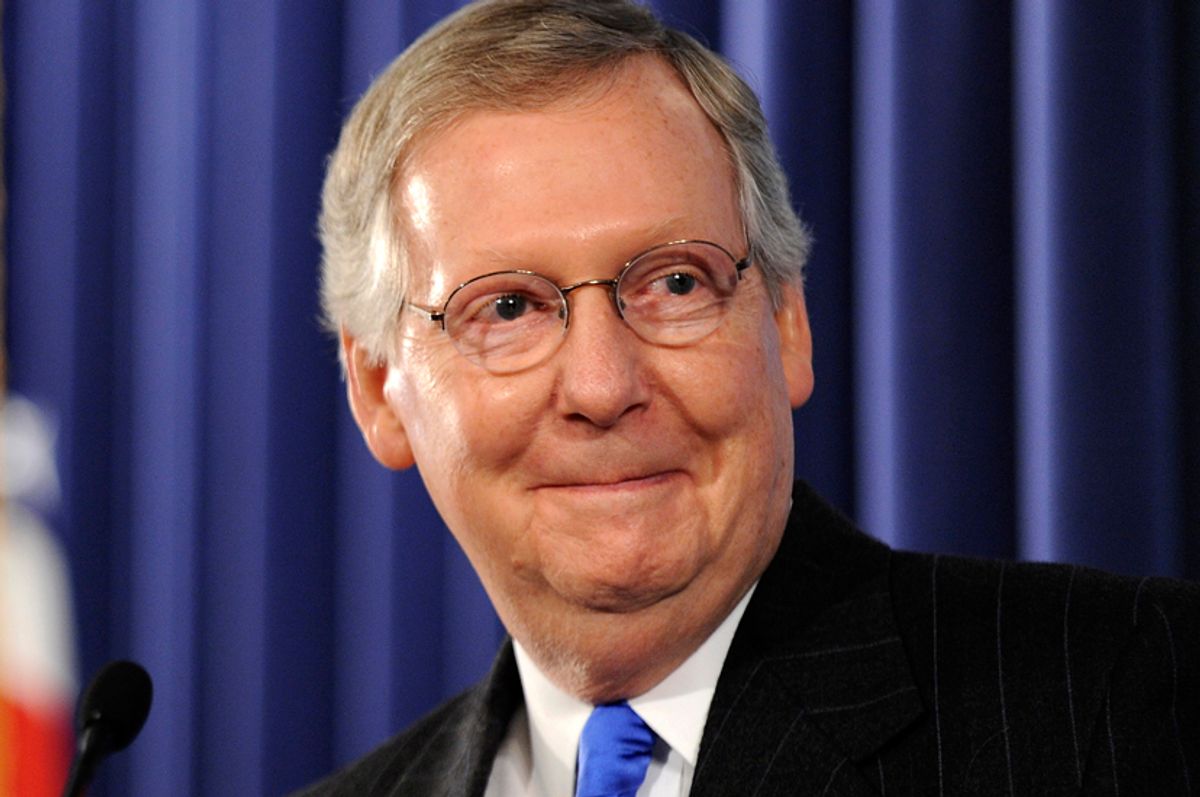 A Republican "inability to make even symbolic concessions has turned a winning hand into a losing one," laments New York Times Op-Ed columnist Ross Douthat. Their spending cut "offensive" has "suddenly collapsed in disarray." President Obama, of all people, is taunting conservatives with "a galling spectacle": his successful impersonation of "the Last Reasonable Man in Washington."

Gee, sounds like a good week for Obama, huh? Now let's compare this analysis to what is actually happening. There wasn't much debt ceiling news over the weekend, but that doesn't necessarily mean Washington is gridlocked. It could just as easily suggest that congressional leaders are coalescing around the latest version of Sen. Mitch McConnell's plan to make the debt ceiling crisis go away.

And that would represent the opposite of disarray.

The McConnell plan, at last glimpse, is  a complicated three-party Rube Goldberg machine that would give Obama the power to raise the debt ceiling in three separate stages, in return for somewhere between $1 trillion and $1.5 trillion in spending cuts, and the creation of a "grand bargain" commission to decide further cuts that, somehow, could not be filibustered.

Ezra Klein is on the money: The evolving McConnell plan represents a significant GOP victory.

For Republicans, this plan is something close to the best of all possible worlds ... It's all spending cuts and no revenues. It's a little plan that denies the Obama administration the political and substantive benefits of a big plan. It's a multi-part plan -- which is more important than people realize -- that forces Democrats to take three hard votes between now and the election, and almost ensures that deficit reduction will be an issue in 2013 and beyond. It's a plan that smartly pockets more than a trillion dollars in spending cuts Democrats can sort-of accept and only then begins a grand bargain process, ensuring that if there's a grand bargain later, it will cut far deeper into the bone of Democratic priorities. If it passes, Republicans will have escaped these negotiations without making any significant political or policy concessions.

If this is a Republican failure, what does success look like? Douthat blasts the GOP for failing to make concessions, but another way to look at what just happened is as proof of exactly how good a deal you can get when you take the hardest line possible. Tea Partyers and other hard-line conservatives are squawking, but they should be celebrating. Republicans control only the House but are still on the brink of achieving a victory without historical precedent -- turning a normally routine vote to raise the debt ceiling into a major policy win.

What makes this all the more extraordinary is the release of new poll results reporting that 71 percent of survey respondents disapprove of how Republicans are handling the crisis. When you combine that news with Dean Baker's salient observation that Wall Street would never allow Republicans to go through with their threat not to raise the debt ceiling, you have to wonder why conservatives are so depressed. The people hate what the GOP is doing and Wall Street is adamantly opposed to the centerpiece of its strategy. Obama has all the cards he needs to keep calling the Republican debt ceiling bluff, and yet still he prematurely folds.