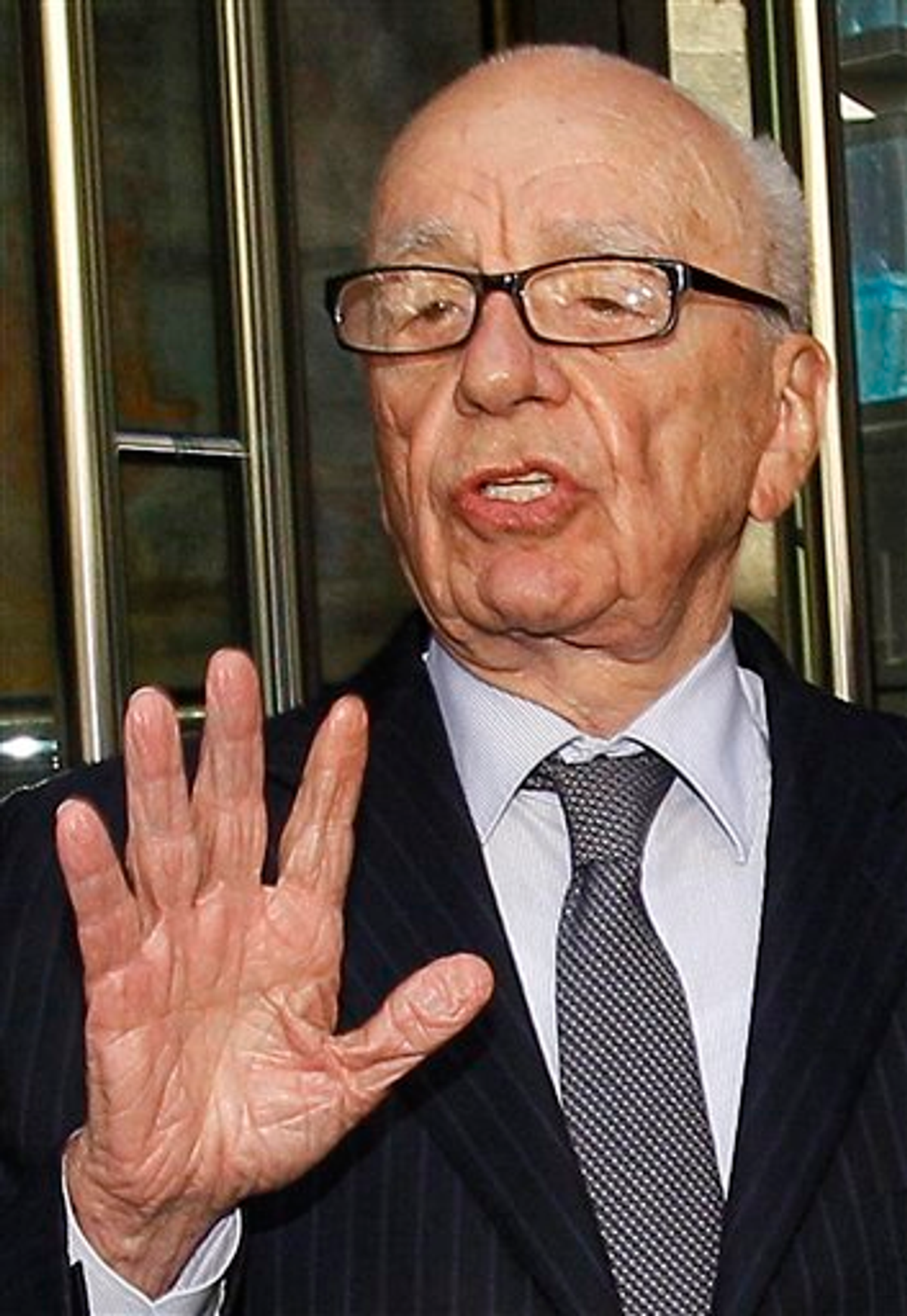 One of the most entertaining aspects of the ever-deepening News Corp. hacking scandal is the way Rupert Murdoch's legion of other media outlets have been scrambling to figure out how to cover the story. They can't ignore it completely. But how can they pay lip service to the irrefutable newsworthiness of the tale while taking pains not to bite the Australian mogul hand that feeds them? In an extremely awkward manner, that's how.

First, there was a stunning "Fox and Friends" segment Friday in which guest Robert Dilenschneider compared the News of the World's scandal to a set of recent corporate security breaches. "It's a hacking scandal; it can't be denied," he said. "Why are so many people piling on at this point? Shouldn't we get beyond it and really deal with the issue of hacking? Citicorp has been hacked into. Bank of America has been hacked into. American Express has been hacked into. We've got a serious hacking problem in this country." To which host Steve Doocy replied, "This happened a long time ago. At a tabloid. In London. Somebody did something really bad and the company reacted... They're piling on." Apparently Fox News has a bit of trouble distinguishing its hackees from its hackers.

Now, in a Monday Wall Street Journal editorial on "News and Its Critics" that borders on brilliant satire, the Murdoch-owned paper rails on about how "our competitors are using the phone-hacking years ago at a British corner of News Corp. to assail the Journal, and perhaps injure press freedom in general." That's right, haters, when you criticize an organization that breaks into a murdered girl's voice mails, and believes paying off cops and tampering with individual privacy is "part of the game," you're messing with the First Amendment itself. Though the editorial is unsigned, one can't help noting its spiritual kinship with the persuasive rhetoric of that legendary debater, Eric "Otter" Stratton, who once noted, "The issue here is not whether we broke a few rules or took a few liberties ... You can't hold a whole fraternity responsible for the behavior of a few sick, perverted individuals ... for isn't this an indictment of our entire American society?"

The piece goes on swinging from there, defending recently resigned publisher and CEO Les Hinton, who "said he knew nothing about wide-scale hacking," and noting that "on ethical questions, his judgment was as sound as that of any editor we've had."

That may well be true. But to include the words "sound judgment" in the same editorial piece that refers to the News of the World's now well-documented and openly apologized for transgressions as "alleged hacking" doesn't scream "we have great decision-making ability."

The piece goes on to complain about media "Schadenfreude so thick you can't cut it with a chainsaw," and warns against coverage that would have you believe "the tabloid excesses of one publication somehow tarnish thousands of other News Corp. journalists across the world." It also ominously mentions the problem of probing into the Murdoch empire "without so much as a fare-thee-well to the First Amendment." Maybe because it's time for a how-d'ye-do to flagrant criminal activity.

We could go down the slippery slope of scare tactics reasoning the WSJ is presenting here, but here's a thought. Of course there are plenty of dedicated, scrupulous journalists and editors working within News Corp., and the worst actions of some shouldn't be a wholesale condemnation of all. But a fish not only stinks from the head, it usually keeps stinking all the way down. And the long questionable motives and tactics of the Murdoch empire are now rightfully under scrutiny.

The integrity of the press is not contingent upon a tabloid's ability to hack into Hugh Grant's phone messages. And if you bear such great love for the freedom of the press, you should surely welcome investigative journalism when you see it -- even when it's aimed at your own parent company.