Herman Cain is the biggest bigot in the race 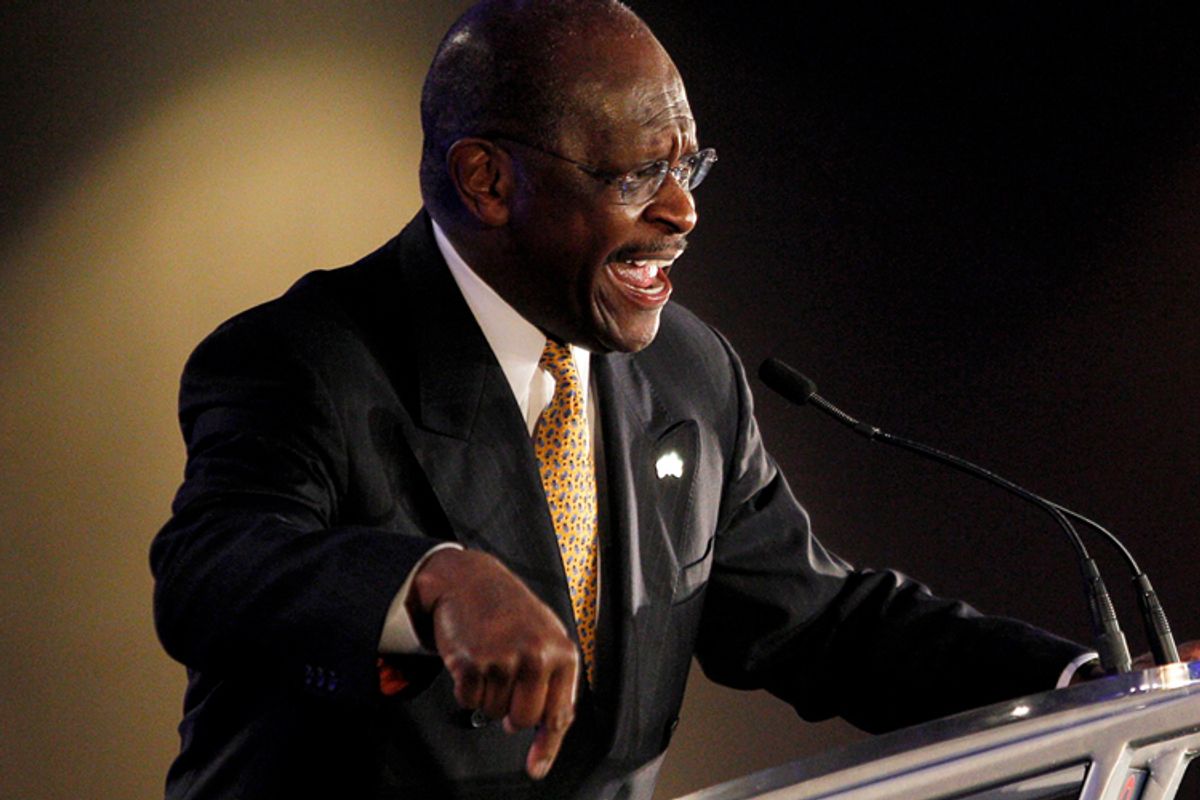 Herman Cain is a delightful character and the funniest person currently running for president. He is a former pizza mogul, which is very fun to make jokes about. He's also the biggest, most shameless bigot in the race, and we're talking about a Republican Party primary campaign.

Somehow, in a race featuring a woman whose entire pre-Tea Party political career was built on opposition to the existence of homosexuality, and a race that may soon feature a governor who proudly presides over the most racist capital punishment program in the nation, the black guy -- the Southern son of a domestic worker and a chauffeur, who worked his way to the top of corporate America before turning to public service -- has managed to be the most hateful, small-minded person running.

Cain's the candidate who wants to institute a religious test to work in his administration. Cain's the one constantly stereotyping and assigning collective guilt to 1.5 billion people. Cain's the one who didn't understand why religious activists of multiple faiths would object to his Islamophobia-based policy proposals. And he's the one who announced that he thinks communities have the right to ban the construction of places of worship on the basis of religion, in an almost perfect inversion of the First Amendment. Hell, Cain's also the one who flirted with birtherism.

Then, to top it all off, Cain said Mitt Romney can't win because of his religion. (Which is Mormonism, not Islam.)

"It doesn't bother me," Cain said to the Washington Times, but those Southerners ...

Is Cain being prejudiced against Mormonism, or is he smearing hardworking white American Tea Party patriots by calling them prejudiced? As we all know, calling someone racist is now officially worse than racism, because white people are America's newest put-upon minority group. Cain would never smear South Carolina by saying he couldn't win there due to his race. Isn't it also a smear to say Southerners are biased against a certain religion? A certain religion that isn't Islam, I mean?

It is not news, and I don't mean to suggest that it is, that black people can be bigoted or racist. But is Herman Cain being so awful in part because he thinks his race makes him immune from charges of bigotry? His campaign is already partly predicated on the notion that supporting him absolves white Republicans of the sin of racism. Immunity from having the "race card" played is part of the Herman Cain appeal. Does he think it also means he can get away with being as hateful as the worst '60s segregationist, only against a religious minority and not an ethnic minority?

I do wonder if some slight fear of elite opprobrium keeps the other candidates from striking an anti-Islam tone as hysterical as Cain's. The need to seem "electable" has even led to Michele Bachmann pretending she's moderated her stance on gay marriage. Muslim-bashing might not help in a general election, but it might not hurt in a GOP primary or two. (Especially if you're running in the South against some weird Mormon guy, right?)

I don't doubt that Cain is sincere in his embarrassing ignorance of the Constitution and his wretched hatred of a religious minority. But he might be playing it up just a bit. Which makes him even worse.