The politics of Captain America

From Jon Stewart's rally to Tea Party gatherings, people don the superhero's costume. Whose side would he be on? 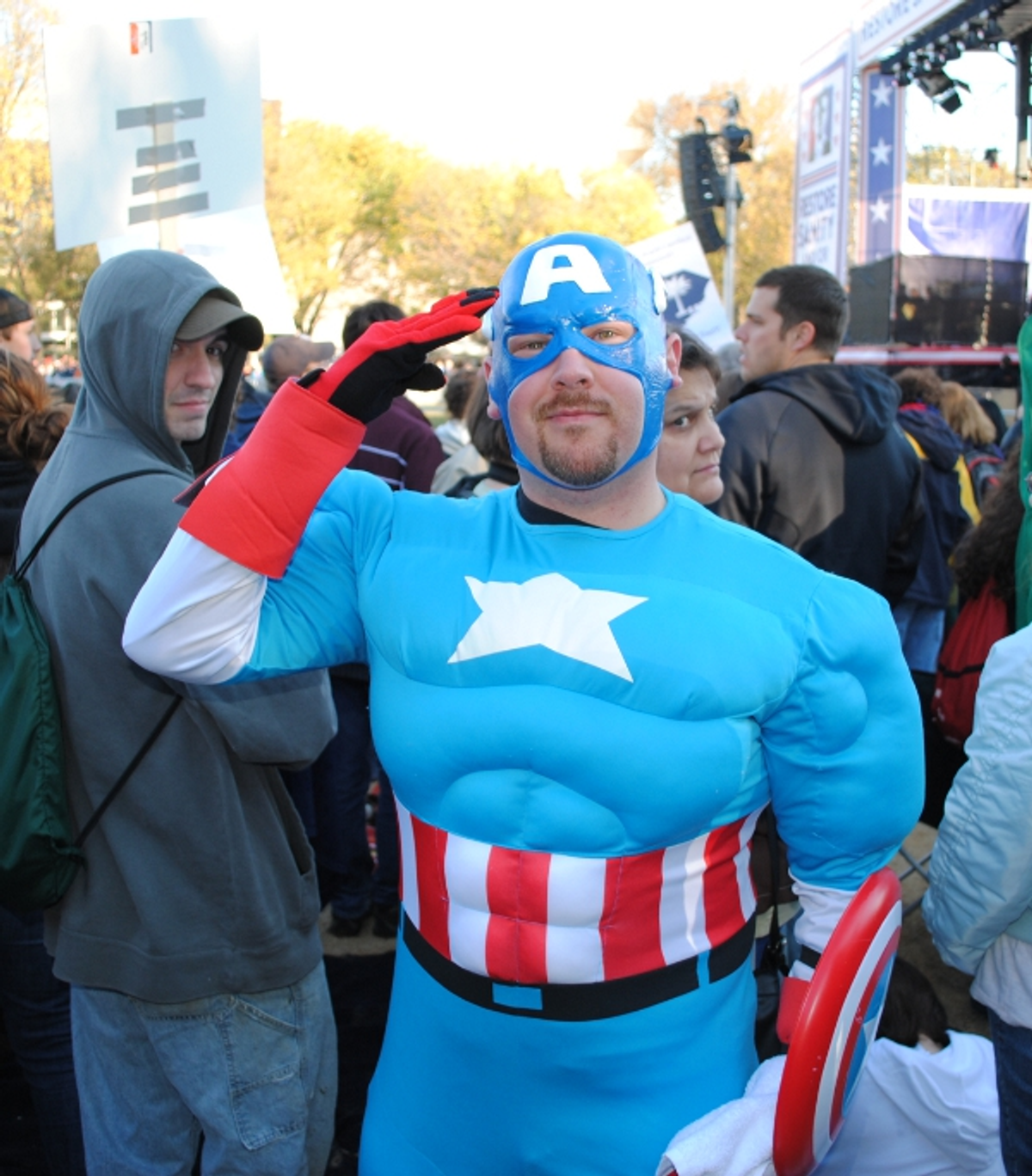 Captain America salutes reasonableness at the Rally to Restore Sanity in Washington, D.C. on October 30, 2010
--

In the early morning hours of Oct. 30, 2010, a guy in a Captain America suit staked out a spot on the National Mall as he waited for Jon Stewart's left-leaning Rally to Restore Sanity. "Hey, Steve Rogers," I called out the name of Captain America's secret identity. He turned around, flashed a big grin at my geekiness and then snapped a salute as I took his picture.

A few months later, in April 2011, a different man wearing a Captain America costume stood on the National Mall. Like the Cap from October, he was there for a rally, only 2011's Cap was a Tea Party patriot clamoring for a government shutdown while holding up a sign that read: "Shut it down/Save America."

After the July 22 release of the summer blockbuster "Captain America: the First Avenger," we'll probably see even more Captain Americas waving placards at protests for all parts of the political spectrum. The Red, White and Blue Avenger is and always has been a potent political image, but whose side would Captain America be on? Would he be a New Deal Democrat slinging his mighty shield for new public works programs or would he be rallying with the Tea Party to lower taxes on billionaires and gut Medicare? Whose Captain America is he anyway?

"He's not just a guy in a flag suit," former "Captain America" writer Steve Englehart says as he takes a break from signing copies of his latest fantasy-action novel, at the Big Wow ComicFest in San Jose, Calif.

"The problem comes from, I think, when people do say, 'Well, he's a guy in a flag suit,'" Englehart adds. "But he sort of transcends. He stands for America as an ideal, not America as it's practiced."

Englehart, a conscientious objector who was honorably discharged from the Army, took over the writing of "Captain American and the Falcon" in 1972 in the midst of the Vietnam War. To make the comic's star-spangled superhero appeal to an antiwar youth audience, Englehart took on the duality and contradictions not only of the comic book superhero, but of America itself. During his first four issues (Nos. 153-156), the original Captain America, who was frozen in a block of ice at the end of the Roosevelt years and then thawed during the Johnson administration, battles a raging McCarthyite Cap from the paranoid 1950s. The ideological struggle between these alternate versions of the hero isn't all that different from what might happen if the Rally to Restore Sanity and the Tea Party Caps came to actual blows with their plastic shields.

With the Watergate hearings underway, Englehart had Steve Rogers hang up his Captain America persona altogether in "Captain America and the Falcon" No. 176, a comic book dated August 1974 -- the same month that Nixon resigned from the White House.

"He had thought that the ideal and the reality were the same thing, and finding out that it wasn't threw him off and that was the basis for the whole story," Englehart says, explaining the story line where Rogers took off the red, white and blue and became a darkly clad hero called Nomad for several issues, ending with No. 183 in 1975.

Looking at the very first issue of "Captain America," it's easy to dismiss it as a piece of jingoistic wartime propaganda. After all, the cover has our hero leaping into a war room and punching out Hitler while Nazi goons fire their Lugers and machine guns at him. However, "Captain America" No. 1 hit stands in December 1940, a year before the attack on Pearl Harbor drew the United States into World War II. While Captain America fit perfectly into the mood of the war effort once it got underway, co-creators Jack Kirby and Joe Simon originally forged the character as a protest vehicle to stir a stubbornly isolationist America to action.

"To me, the times were screaming war," Jack Kirby recalled during a 1989 or 1990 radio interview on "Hour 25" that can now be found at Kirbymuseum.org. "To me the enemy was Hitler. The enemy was growing and growing, and I didn't know where it was going to end, but every day something new would happen, and it was really scary. This was the kind of event that I felt was ruling our times and I felt it inside of me and it had to come out in some way."

Kirby's depiction of Hitler as a comic book villain had Nazis calling the artist at his office and threatening to "beat the daylights" out of him. "These were New York Nazis," Kirby explained. "They had a camp on Long Island." Growing up as a tough scrapper during the Depression on New York's Lower East Side, Kirby was ready for a fight, but the Nazis never showed up.

"They wanted to fight, well, what the heck," Kirby said flippantly, "I would do it."

Jack Kirby passed away in 1994, but Joe Simon, now 97 years old, is still around. Simon supported President Bush and the wars in Iraq and Afghanistan following the 9/11 attacks. He even re-created the iconic cover of "Captain America" No. 1 with Osama bin Laden replacing Hitler.

"We just couldn't sit back and let this keep happening," Simon told the Asbury Park Press in 2004. "We had to go in there. I know it's very sad and everything, but I think he's doing the right thing. I'm 100 percent behind [President Bush]."

However, an earlier interview with the Cleveland Plain Dealer found Simon in a more reflective mood. "After Sept. 11, I redrew the cover of 'Captain America' No. 1, but put Osama bin Laden in place of Hitler," he said. "But I just did it for myself. War is too sensitive a topic for comics to deal with today. "

In the comic books themselves, Captain America never fought the War on Terror as directly as he participated in World War II. Marvel instead preferred to keep its heroes in their own universe, using metaphors for current events that were safely open to interpretation. The "Civil War" crossover series by Mark Millar and Frank McNiven that ran from July 2006-January 2007 had Captain America and Iron Man taking opposing sides over a U.S. government Superhuman Registration Act, not the Patriot Act.

When Eisner Award-winning writer Ed Brubaker depicted a Tea Party protest in a slightly negative light in "Captain America" No. 602 in 2010, the right-wing blogosphere and Fox News cranked up their outrage machine, griping that Marvel was "making patriotic Americans" into "its newest super villains." With a $140 million "Captain America" movie only a year away, Marvel had more to lose than back when it was just selling magazines. The company promised to remove the material that wounded the Tea Party's sensibilities from future reprints of the series.

Joe Simon may have put it best when he said, "Things are far more complex than they were in the days when Captain America could punch Hitler in the jaw," but the broad appeal of Captain America appears undiminished by recent controversies. In between Captain America's appearances at the rallies to restore sanity and shut down the government, Mexican American pro-wrestler Rey Mysterio wore a Captain America costume during his match at WrestleMania XXVII in Atlanta. Mysterio's outfit had a Mayan motif in place of the star on Cap's chest, making the character more Meso-American than merely Norte Americano. It seems that Captain America may be the only thing that can bring this fractured country together, if we could only agree on who he is.