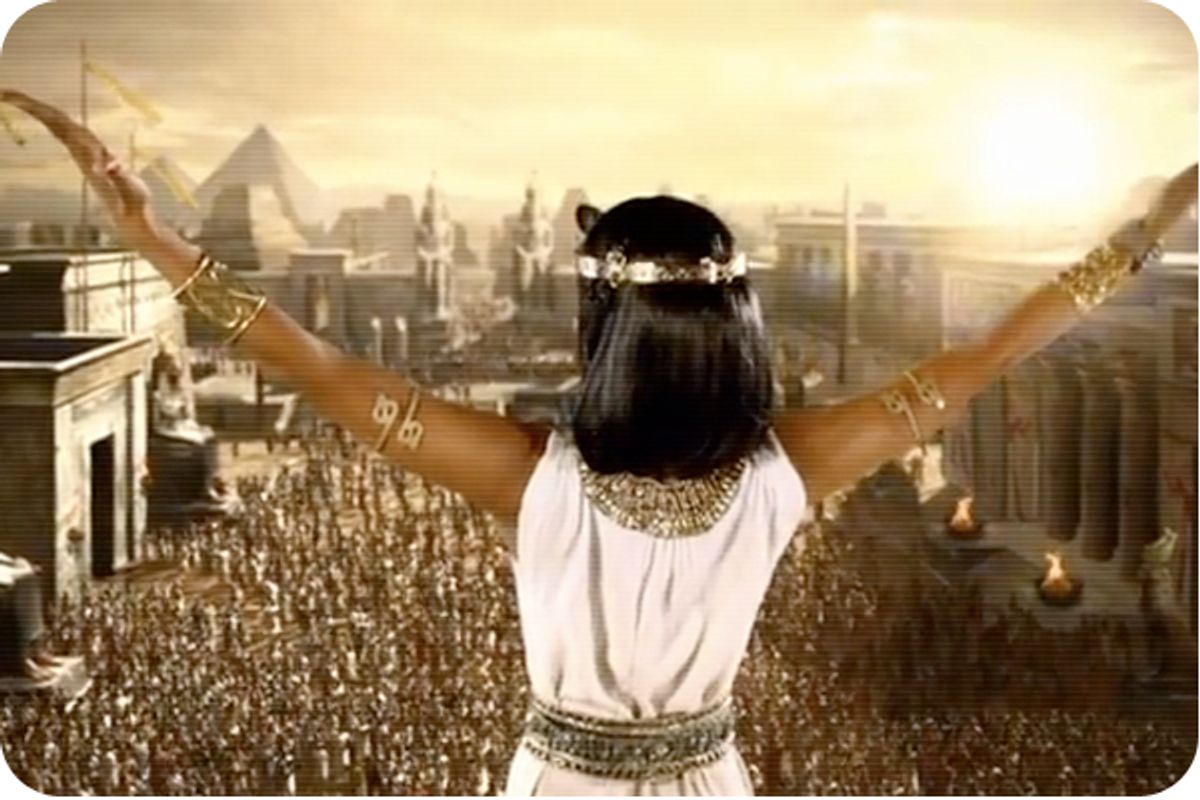 A woman clutches an infant, hoisting the child toward the moon in a "Roots" meets "The Lion King" homage. "It's the cradle of life." A regal Cleopatra greets the multitudes. "It's the center of civilization."

Oh, I know this one. It's ancient Mesopotamia! Some Crouching Tiger martial arts action ensues, and knights battle, while pretty ladies demurely watch. "Over the ages, and throughout the world, men have fought for it, even died for it. One might say it's the most powerful thing on earth."

Uhh, does it involve Indiana Jones? No, it's "The V." And not a devious tribe of space lizards either.

Summer's Eve would like to invite you to celebrate the power and glory of the holy of holies, the yoni, the cooch, by proclaiming "Hail to the V!" Now could you freshen that thing up?

It cannot be easy, being in the douche biz. How do you market a product whose very name is synonymous with jackassery? When most people think douche, they don't think "feminine majesty." They think Donald Trump.

So the epic, tongue-in-cheek campaign aimed at showing the love to "pure womanly awesomeness" is in many ways a healthy departure from the lamentably "not so fresh" days of yore.

Likewise, Summer's Eve's concurrent "That's Vaginal!" spot, featuring a talking cat (get it?) who urges us to stop dancing around that "natural wonder" and call a vagina a vagina is pretty freaking hilarious. When that cat notes that the vagina's "synonyms and euphemisms [are] all slurs, bleeped out on broadcast TV" and asks, "What if we state boldly and proudly that vaginas are good -- no, ASTOUNDING?" you've got to admit, that talking cat has a point.

Besides, if men can build entire skylines devoted to their junk, shouldn't we be likewise stoked about ours? So kudos to the douchemongers for having a cheeky sense of humor, while also providing consumers a frank "owner's manual" that attempts to take some of the mystery -- and shame -- out of the female body.

Now here comes the "and yet" you've been waiting for. While plenty of medical professionals agree that douching is unnecessary and that a healthy vagina doesn't need Morning Paradise or Delicate Blossom deodorant spray, I can't fault a brand of douche for its raison d'être -- selling douche. But I can take umbrage at the notion that any human being, male or female, can be reduced to any single part, however awesome or powerful or recreationally fantastic it may be. Sure, it's meant comically, but do any of us need a company that makes slot wash selling the crazy idea that Cleopatra was just a vagina? That maybe the invasion of Troy or Arthurian legend boil down to pussy hunts?

Vaginas are good, no, ASTOUNDING. So are our boobs and our butts and our brains and our sweat and our imaginations. And you can't build a civilization on vagina alone.