Why breast-feeding controversies don't go away 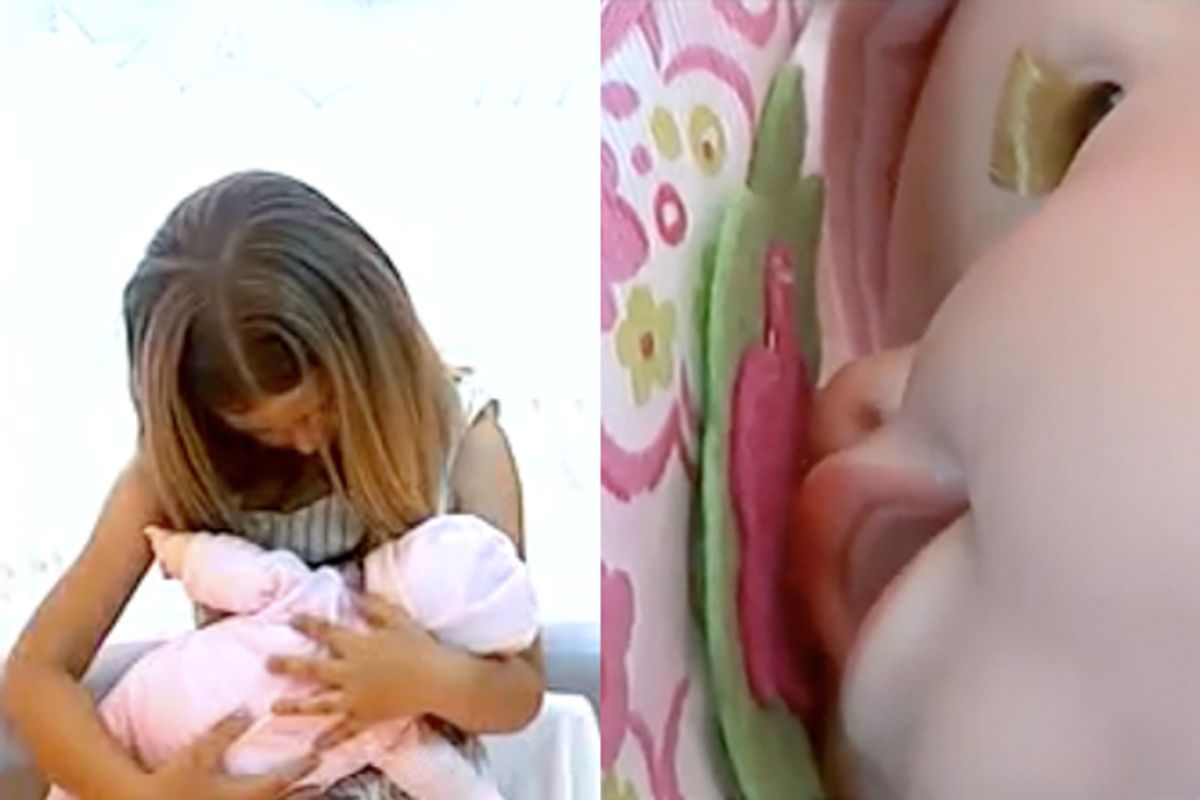 You'd think by now the notion of breast-feeding as a natural, healthy part of baby care would generally be encouraged -- or at the very least accepted. And for the most part, you'd be correct. We're a long way from the days when a nursing mother would be exiled to the public restroom, or berated for not giving her child formula. Earlier this year, People and OK! ran a photo of model Miranda Kerr smiling sleepily while lovingly nursing her son, and the image was greeted with near universal cheers. But old attitudes die hard, especially regarding a portion of the female anatomy so strongly associated with sexy times and wet T-shirt contests.

First up this week, it's time once again to trot out the controversy over a Spanish baby doll that lets little girls pretend to breast-feed their babies. Bebe Gloton,who wiggles and makes suckling sounds when a child latches her onto a "fashionable" halter, first raised hackles when she appeared on the international market a few years ago. At the time Fox speculated ludicrously that she was "too grown-up for young children -- and may even promote early pregnancy." Now, Berjuan Toys is set to bring her to America, and once again, America must figure out whether it's ready for its little girls to engage in play lactation. And already, the major news media are swarming around the story, asking, is it appropriate? Think of the children!

On CBS, the story generated hundreds of comments in just a day, neatly divided between those who observe, "No one would say that it is inappropriate for little girls to bottle feed a doll. Then why is breastfeeding the doll inappropriate?" and those who decry the "Neanderthal breastfeeding pinheads."

But the most absurd comment so far surely comes from -- surprise! -- a Fox commentator. On "Fox and Friends" Tuesday, regular contributor Dr. Keith Ablow called the doll "beyond ridiculous, it's destructive. This is another way of turning little girls into adults," he explained. "It contributes to the sexualization of children and it makes them targets of assailants." And when challenged by "mommy blogger" Jessica Gottlieb on his creepy viewpoint, he elaborated, "I assure you I'm not a pedophile." At which point Fox deployed its 10-foot pole and the subject was quickly changed.

I'm as pro-breast-feeding as it gets, but I'll admit the fact that someone invented a "fashionable" halter with nipples on it for little girls sounds a tad unorthodox even to my ears. Yet children play at adult roles all the time. They play at being soldiers and cops and fashion models and moms. Pretending to nurture a baby isn't inherently any more sexual than any of those acts. The real shocker about Bebe Gloton is that she sells for $89 online. Considering that one of the great delights of breast-feeding is that it's a low-overhead endeavor, why not model that as well? A Whoopsie Doo Baby Alive who pees and poops herself is only $15. If you want to normalize breast-feeding for your kid, just give her a regular baby doll and demonstrate how you fed her when she was a baby herself.

But lest Fox News and CBS commenters give you the impression that breast-feeding outrage has run amok, there's also encouraging news out of, of all places, the world of chain restaurants. When a couple at a Maryland Ruby Tuesday's complained to the waitstaff about a mother nursing her child nearby recently, the staff allegedly put pressure on the woman to hustle out. Predictably, the La Leche League got involved, and a nurse-in was scheduled for Tuesday.

What's heartening is how Ruby Tuesday enthusiastically embraced the opportunity. The branch office representative told the league that "Their policy is to offer to reseat any guest that complains about the nursing mama and her family, but never to disrupt the family's meal." Moreover, he told them "they are looking forward to having our group" drop in and get its milk on.