Administration indicates that the president would be open to short-term extension of debt ceiling, with conditions 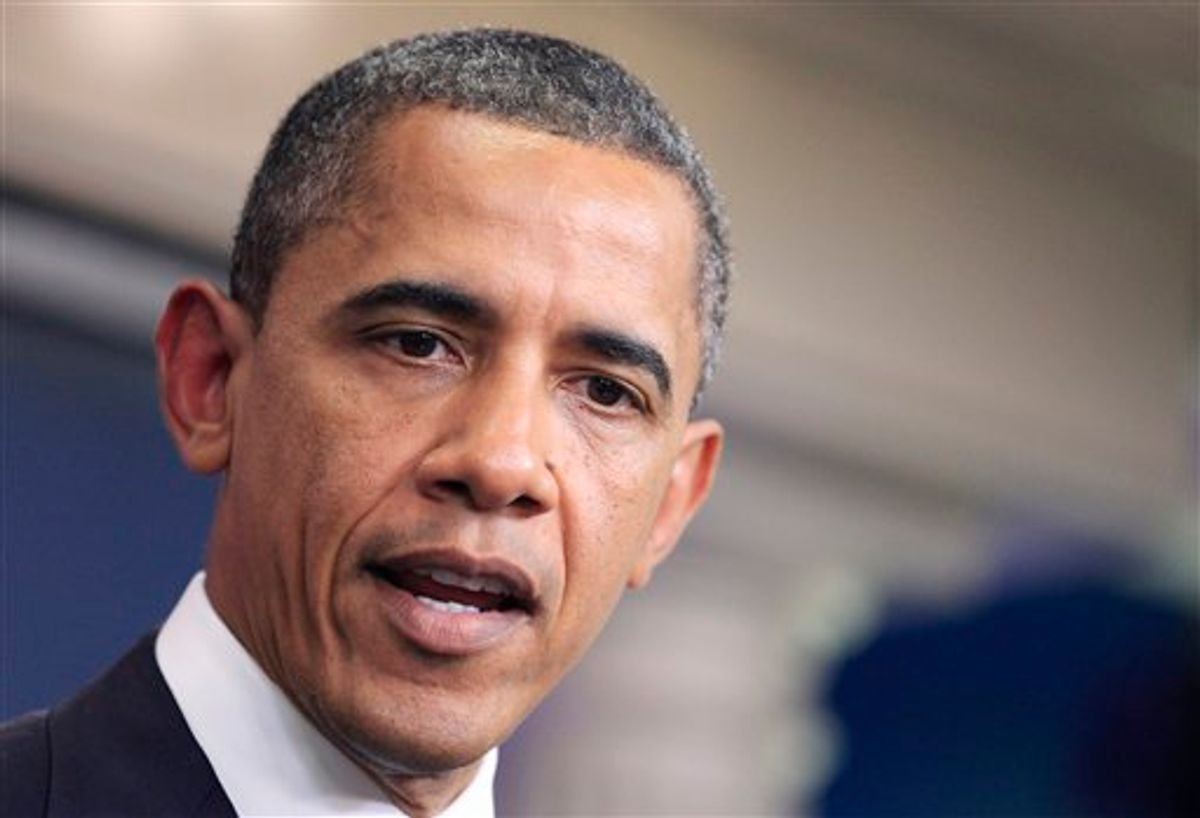 President Barack Obama summoned top Democratic lawmakers back to the White House Wednesday to resume negotiations on averting a potentially crippling government default, as attention focused on a new bipartisan budget plan emerging in the Senate.

The White House also indicated Obama would be willing to sign a short-term debt limit increase -- something he's opposed -- if it's merely a stop-gap measure to allow time for a broader plan to get into place, something that likely couldn't be finished by the Aug. 2 deadline to increase the government's borrowing limit.

Obama's meeting with House and Senate Democratic leaders, planned for mid-afternoon Wednesday, marked a partial resumption of talks that ended last week after five days straight of Obama huddling with lawmakers from both parties, with little progress to show for it. Republican officials said they expected a meeting between GOP leaders and the president later in the day.

The announcement Tuesday of a possible deal by the Senate "Gang of Six" was seized on by Obama as a possible breakthrough. Now the job ahead for the president, if he is to build momentum behind the plan, includes overcoming GOP opposition to tax hikes involved and selling members of his own party on the cuts to entitlement programs that it embraces.

"We are in the 11th hour," said White House press secretary Jay Carney, repeating what Obama had said Wednesday. "We need to meet, talk, consult and narrow down in fairly short order what train we're riding into the station."

"If both sides agree on something significant we will support the measures necessary to finalize the details," Carney said.

The plan by the Gang of Six is far too complicated and contentious to advance before the Aug. 2 deadline to avoid a default that Treasury Secretary Timothy Geithner and other experts warn would roil the markets, drive up interest rates and threaten to take the country back into a recession. But the plan's authors clearly hope it could serve as a template for a "grand bargain" later in the year that could erase perhaps $4 trillion from the deficit over the coming decade.

It includes tax hikes on some that are opposed by Republicans and cuts to Medicare and other entitlements that many Democrats are against.

"This is a unique opportunity and we ought to seize it," Carney said, even while saying the White House still wanted to keep working on a less ambitious Plan B measure to provide for increasing the debt limit even if no big plan can be reached.

That was a sign administration officials are acutely aware of the obstacles that remain to a major deal, perhaps particularly from House conservatives who adamantly oppose any new taxes.

Even among Democrats, Rep. Chris Van Hollen, senior Democrat on the House Budget Committee, said lawmakers had too few details about the Gang of Six plan. He said that until they have a chance to see the fine print, it will be difficult to get their caucus to focus on it.

The top Democrat in the House, Minority Leader Nancy Pelosi, reacted positively Wednesday to the new plan, saying it "has some good principles in it." At the same time, a top House GOP military hawk said it would cut defense too much.

House Armed Services Committee Chairman Howard "Buck" McKeon, R-Calif., blasted the Gang of Six plan in a missive to his panel members, saying it would cut the Pentagon way too deeply and would unfairly curb military health and retirement benefits.

"This proposal raises serious implications for defense and would not allow us to perform our constitutional responsibility to provide for the safety and security of our country," McKeon wrote in a memo to panel Republicans.

Speaking on the Senate floor Wednesday morning, Democratic leader Harry Reid said he was confident Obama and congressional negotiators could avoid a government default, but he also said the Senate still needed to hear from the House.

"We have a plan to go forward over here so I await word from the Speaker," said the Nevada lawmaker, who also mentioned that he spoke to Obama Tuesday night. Reid was referring to a plan he's working on with GOP leader Mitch McConnell of Kentucky to give Obama new powers to obtain an increase in the borrowing cap unless overridden by Congress -- the Plan B that the White House also wants .

In the House, majority Republicans won a 234-190 vote Tuesday on a "cut, cap and balance" plan conditioning any increase in the government's borrowing authority on congressional passage of a balanced budget constitutional amendment and a fresh wave of spending cuts. That reflected the strength of tea party forces elected in last year's midterm election. GOP conservatives reveled in their victory, however temporary it may be, since the plan faces a White House veto threat and is a dead letter in the Senate anyway.

The GOP measure would impose an estimated $111 billion in immediate spending cuts next year and would cap overall spending at levels called for in the House's April budget plan, backed up by the threat of automatic spending cuts. But what conservatives like most about it is its requirement that Congress approve a balanced budget amendment to the Constitution -- a step that requires a two-thirds vote in both House and Senate -- before any increase in the current $14.3 trillion debt limit can be shipped to Obama.

The balanced budget amendment requires limiting the size of government to 18 percent of the size of the economy, sparking a furious assault from Democrats who say it would force Medicare cuts much deeper than the controversial House GOP budget plan that passed in April.

The Gang of Six plan, meanwhile, promises almost $4 trillion in deficit cuts, including an immediate 10-year, $500 billion down payment that would come as Congress sets caps on the agency budgets it passes each year. It also requires an additional $500 billion in cost curbs on federal health care programs, cuts to federal employee pensions, curbs in the growth of military health care and retirement costs, and modest cuts to farm subsidies.

The plan also involves a major influx of new tax revenues as Congress overhauls the loophole-choked U.S. tax code. It calls for getting rid of myriad tax loopholes, preferences and deductions and using the savings to sharply lower income tax rates. But $1 trillion to $2 trillion would be skimmed off the top and used to reduce the deficit, depending on who does the calculations.

House GOP leaders were muted in their criticism and pointed to promised reductions in income tax rates rather than the net increase in overall tax collections.

"On the positive side, the tax rates identified in the Gang's plan -- with a top rate of no more than 29 percent -- and the president's endorsement of them are a positive development and an improvement over previous discussions," House Majority Leader Eric Cantor, R-Va., said. "That said, I am concerned with the Gang of Six's revenue target."