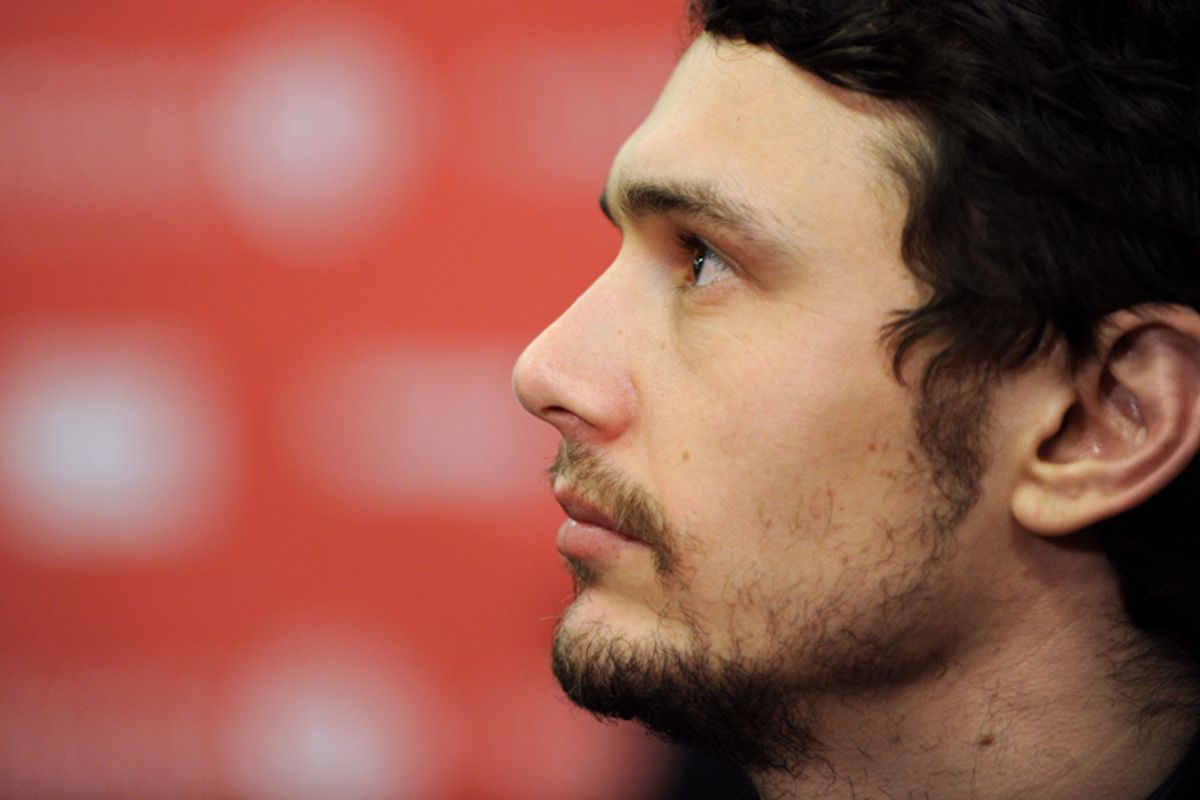 James Franco may be the greatest Icarus metaphor in celebrity culture today. After a great wave of interest in the actor/artist/student/teacher/whatever for the past two years, the media has slowly turned on the handsome renaissance man ever since he bombed as co-host of the Academy Awards.

Franco responded by going into hiding: deleting his Twitter account, sequestering himself to work on his new album with Kalup Linzy and his various academic pursuits, and generally staying away from the burning spotlight that seared his wings. But today ... today James Franco has reemerged, resplendent in gossip and new artistic endeavors. Turns out, he hasn't learned anything at all in the past three months. Welcome to Franco 3.0.

In order for anyone to pay attention, Franco had to make a big splash, and that means sacrifice. The actor confirmed that he's split from girlfriend Ahna O'Reilly after five years, blaming the breakup on the long-distance strain since James moved to the East Coast. In the August issue of Playboy, Franco says:

"We'd been living together in L.A., then I came to New York to go to school for two years ... Then I signed up for more school at Yale. I think that was it for her."

Franco's relationship with O'Reilly has never really been part of his public image, in part because the "Milk" star seemingly wants to maintain a sexually ambiguous persona. Though he told the Advocate that he's "not gay" (and then told the L.A. Times that "maybe I'm just gay"), he's definitely left the door open for speculation. Besides participating in performances with drag artist Linz , and his NYU film "The Feast of Stephen" (in which a young boy fantasizes about having sex with school bullies), Franco has played a multitude of homosexual characters, most recently Allen Ginsberg in "Howl."

So it comes off as a media-savvy move for Franco to announce his breakup on the same day he also admits to having a man-crush on Robert Pattinson, an otherwise innocuous piece of bro-humor that now takes on a possibly deeper meaning. Or maybe not! If there's one thing James Franco loves, it's to keep fans guessing about his sexuality, which he then claims (rightly so) is irrelevant to how his work should be viewed.

But it's a sleight of hand: As long as everyone is discussing how not important James Franco's sexuality is, then they're not paying attention to the fact that he just sold a piece of invisible art for $10,000. Part of his fundraising project to create a Museum of Non-Visible Art, Franco just parted with a piece called "Conceptual -- Fresh Air," his most expensive item of nonexistence. The buyer, Aimee Davison, endorses it as "social media art" (what???), but then admits, "I sensed that Franco's project was controversial and I wanted to participate in the controversy and possibly benefit from it."

Truly, I feel like we should be outraged at this flagrant capitalization on nonexistent art, though I guess it's better than the time Franco cut Brad Renfro's name into his arm and called that art. This whole con is as reprehensible as his pursuit of faux degrees from legitimate universities. And in true Franco style, it's conceptually interesting, but executed in a half-assed, lazy way that no one except a celebrity could get away with.

But more important: Do you guys think James Franco is gay or what?