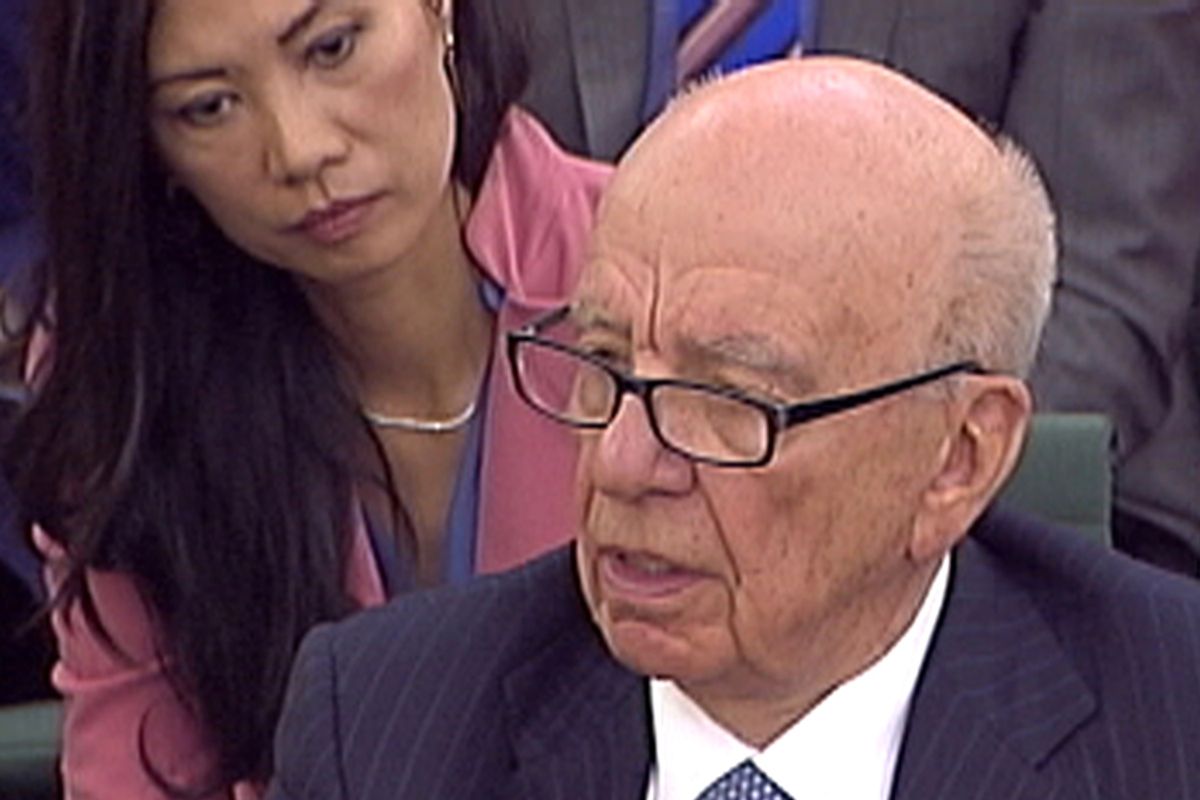 Wendi Deng ( L) watches as her husband, News Corp Chief Executive and Chairman Rupert Murdoch, is questioned during a parliamentary committee hearing on phone hacking at Portcullis House in London July 19, 2011. Later, Murdoch was attacked by a protester on Tuesday while giving evidence to a British parliamentary committee at which he defended his son and his company over a scandal that has rocked the British establishment. REUTERS/Parbul TV via Reuters Tv (BRITAIN - Tags: CRIME LAW MEDIA BUSINESS) FOR EDITORIAL USE ONLY. NOT FOR SALE FOR MARKETING OR ADVERTISING CAMPAIGNS (Â© Reuters Tv / Reuters)
--

The News Corporation phone-hacking scandal is showing no signs of letting up. The House of Commons is grilling Prime Minister David Cameron, one of the many parliamentary committees investigating the scandal released a damning report, and yesterday's dramatic questioning of Rupert and James Murdoch and Rebekah Brooks did nothing to allay concerns about the criminality (or sheer incompetence) of top News Corp. management. With all that going on, there's one story that almost every news outlet on both sides of the Atlantic is highlighting: Whoa, did you see Murdoch's wife deck that guy?!

Yes, a guy attempted to pie Rupert Murdoch during his testimony to Parliament. And Wendi Deng, his wife, was captured by cameras leaping into action and smacking the would-be assailant. And it was pretty funny. But the second it happened, you know every editor in the U.S. and the U.K. immediately assigned someone the Wendi Deng story. And because these stories had to be ready for the morning papers or the morning shows, they all ended up as interchangeable biographical sketches based on previously published profiles with a bit of color from yesterday's incident thrown in.

Recount the pie incident that everyone saw on TV or on the Internet. Pull back to Wendi Deng's background. She is the daughter of a factory worker. She played volleyball. Mention brief green card marriage to the husband of the couple who sponsored her student visa. Quote a Murdoch expert or media reporter (Brian Stelter and Michael Wolff are available!) on her power and ambition and how she is the perfect partner for Murdoch. Note her work opening up new business opportunities for News Corp. in China. Add things people said about the pie incident on Twitter. Done!

"Wendi Deng Murdoch: The Woman Behind the Media Mogul," from ABC News:

But Deng is much more than a protective trophy wife and mother to two of Murdoch's children. She is a Yale University business school graduate and former News Corp. employee who also worked as the head of MySpace China, purchased by Murdoch in 2005.

Her background is as feisty and intriguing as the right hook and quick reflexes she displayed to protect her husband as he faced tense questioning by a British parliamentary panel, and now sees his media empire rollicked by scandal and arrests.

"Who's the woman who fought Murdoch's foam foe? from CBS News:

But she's not just a supportive wife-turned-bodyguard. She's also raising their two daughters -- Grace, 9, and Chloe, 7 -- and helps to shape his media empire's operations in Asia and, more recently, in Hollywood.

In her latest role, Deng helped produce the film "Snow Flower and the Secret Fan" for her husband's movie studio, a story about the lifelong friendship of two Chinese women.

She's not just a wife, she also is allowed to do things, like produce vanity project films!

With strong swipe, Murdoch's wife stands by her man" from Reuters:

Her actions have even generated a new online nickname for her in China -- "Smack down sister".

"Her reactions were super-fast! She walks away as the only hero," wrote Zhang Xin.

"When you marry, you should marry a Chinese woman. In times of danger, she will act," added Loulan Loulan.

Deng however has not taken to her own Weibo account to talk about what she did.

With 124,131 followers, her Weibo site is full of pictures of her with celebrities, such as Australian actors Nicole Kidman and Hugh Jackman, and references to her "hubby".

She has a blog!

Even the Guardian -- home of the best, most substantial, and most influential reporting on the entire phone-hacking scandal -- got into it, with "Wendi Deng's Charlie's Angel moment boosts husband's image."

At 5ft 10in and possessed of steely determination, Deng has always excelled at sport. It is undoubtedly because of her that Rupert finds himself pumping iron at 6am and downing a concoction of fruit and soy protein, as the News Corporation chairman once disclosed to Vanity Fair in a rare interview.

She is trying very hard to keep her husband alive!

I think the Telegraph wins the headline battle: "Phone Hacking: Wendi Deng - from Communist obscurity to top of capitalist heap."

But Fox News, obviously, has the single most shameless story on Wendi Deng. It is an "opinion" piece, from some "media consultant' named Kristi Stone Hamrick. Headline: She Is Woman, Hear Her Roar -- Wendi Deng Murdoch Fights Back. It is a pretty embarrassing and shameless fawning tribute to the boss's wife. ("Though she is a native of China, one wonders if there isn’t a little Amazon in her blood. " No, one does not really wonder.)

The best part of the piece, though, is this incredible description of what the News Corp. scandal is supposedly about:

(Those of you with better things to do might not know that the media mogul Murdoch is being questioned about the tactics some of his reporting staff undertook, including wire taps, paying for news tips and generally beating the competition to shreds with scoops. In response, politicians are clamoring for a chance to say – on camera – how horrified they are about the entire ordeal. Simply horrified.)

Persecuted for scoops! And paying for news tips! What perfectly harmless-sounding behavior.

Did I mention that parliamentary committee report? I know everyone needed to know about Wendi Deng's teenage volleyball career, but the all-party home affairs committee report on Scotland Yard's initial 2005-2006 investigation into News Corp's phone-hacking is actually pretty interesting too.

The report finds that News International "deliberately" blocked the police investigation. Rebekah Brooks lied to police about her knowledge of police bribery and hacking. Wendi Deng will need a lot more than a feisty background and a powerful left hook to protect her husband from further revelations of his company's malfeasance.