Our pediatrician gave my daughter the wrong vaccine

It was a minor slip-up. But it changed her life in an instant 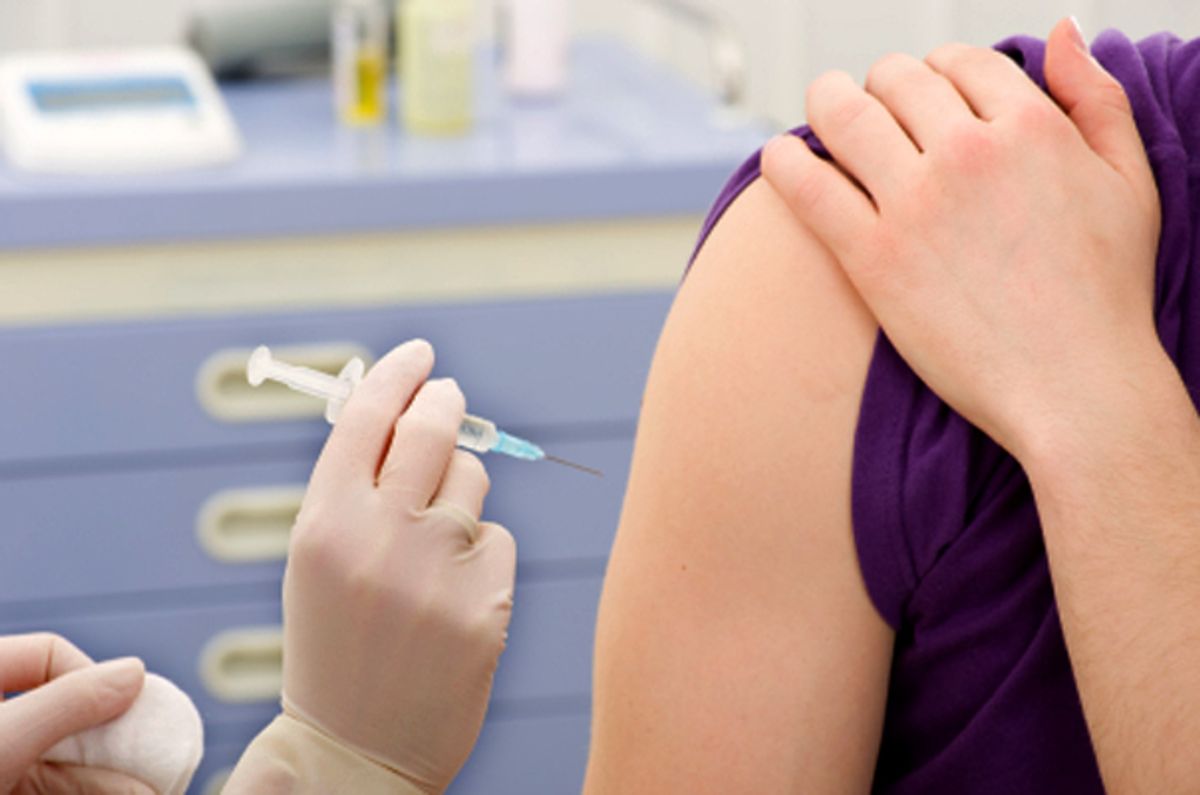 We'd left the pediatrician's office a mere two hours before the call came. On a recent sunny, summer afternoon, I'd brought my two daughters in for their annual physicals. They'd been weighed and measured and prodded and had blood drawn and received their shots and been handed lollipops at the end. We'd discovered my 11-year-old has grown 3 inches in the past year; my 7-year-old has grown 2. Their vision and hearing and vitals are all good. Two apparently clean bills of health -- it was all a family could wish for. Their blood and urine tests, meanwhile, likely hadn't even left for the lab yet. So why then was our doctor calling us back so soon? "I'm so sorry to tell you this," she said. "The nurse gave your child the wrong vaccine." At the end of the visit, my soon-to-be middle-schooler Lucy, my beautiful Harry Potter obsessive, was supposed to get the meningitis vaccine. Instead, for reasons still not fully clear to me, the nurse saw a preteen female in the chair, reached for the HPV vaccine Gardasil, and injected her.

Gardasil is a relatively new vaccine -- it's only been on the market five years. It's generally administered to girls in early adolescence -- sometime after the onset of puberty but before they become sexually active -- in three doses over the course of roughly six months. It offers protection against the human papillomavirus, which, in certain strains, can lead to cervical cancer.

I've been following the HPV vaccine with interest for years, and read all about the clinical trials and potential risks with a keen personal investment in the story. Aside from the fact that I have two daughters, I, like a vast majority of sexually active women, have had the virus. Though I've never experienced any outward symptoms, the legacy of HPV has meant two LEEP procedures to rid my cervix of precancerous cells, and ongoing regular monitoring. Thanks to pap smears and routine checkups, cervical cancer is not nearly the threat it was even a generation ago. But if I could offer my daughters an extra degree of protection from what I've been through, both for their sakes and that of their future partners, wouldn't I?

I would. But there's a difference between offering a child something and insisting upon it. The little girls whose every meal and book and outfit were once mine to choose are becoming more autonomous young ladies every day. And though I believe in the logic of getting the HPV vaccine, I have also long felt strongly that any decision involving their future sexual lives should be theirs to make.

Now, however, because of a careless oversight, instead of having a considered, private dialogue about the pros and potential cons of the vaccine, I had to tell my firstborn -- and her sister -- that she'd been given something neither of us had ever asked for. Both children had been in the room while I got the call, had heard my deeply unnerved line of questioning. "Well, what did you give her? What are the side effects? And what are we supposed to do now?" I'd tersely asked, frantically scribbling information on the back of a nearby phone bill. I'd silently mouthed reassurances to my daughters while fighting the urge to put down the phone, get in a cab and throttle the nurse personally. And then I'd had to, with all the calm I could muster, have a lengthy conversation about how the doctor had made a mistake, but it was OK, and everything was fine, and now we were going to talk about sexually transmitted diseases.

My daughters know the facts of life. They know where babies come from, and how people can get AIDS. Often, their knowledge hasn't come from carefully planned birds-and-bees heart-to-hearts but from spontaneous opportunities -- a confusing scene in a movie, a rumor a kid spread on the playground. Life does not always keep children in a bubble until both you and they are at your optimum moment of emotional preparedness. Stuff happens, and being a parent means being there to talk about it. It wasn't the conversation I minded having. It was the harrowing realization of how easily a sloppy mistake, from someone we trusted implicitly, could have meant something far more serious than what we'd just experienced. It was being robbed of choice. Not mine. Hers.

"Why did this happen? Am I going to be OK?" my daughter asked, scared and sobbing and, on a very primal level, angry and betrayed. "Of course," I said. "The full vaccine takes three shots. And if you don't want to go on with it, you don't have to." I couldn't go back in time and take away what had just happened. I could, however, give her one thing she needed -- control over what happens next to her body.

That evening we spoke with our former pediatrician from our old neighborhood, a terrific doctor and a mother with three teenage daughters of her own. While aghast at our current doctor's error, she was incredibly reassuring to Lucy and me. "All three of my daughters got it," she said. "And you're at a safe age to receive it. I'd tell you to proceed and don't worry."

Doctors and nurses -- even very good ones -- commit errors all the time. Even the smartest and most efficient provider in the world is still human. While my daughter and I are not ruling out changing pediatricians, she has decided to proceed with the course of vaccination. She didn't come to it lightly; she slept on it and shyly told me her wishes the next day. She is a serious girl, and treated this is a serious choice. Meanwhile, she still needs to get that meningitis shot, and I'm going to make damn sure that's the shot she gets.

I have come out of this grateful that a relatively minor scare has taught our family to always, always make sure to state clearly before any procedure or vaccination exactly what we're in for and what's expected. I will never again take it for granted when we walk into an exam room that the staff has been accurately apprised of what to do. I know now that when the needle comes out and the Band-Aid goes on, that's no guarantee the pain is over. And my daughter has seen in a very new way that often in life things happen over which you have no control. But that growing up means learning to have a voice in the things you can.