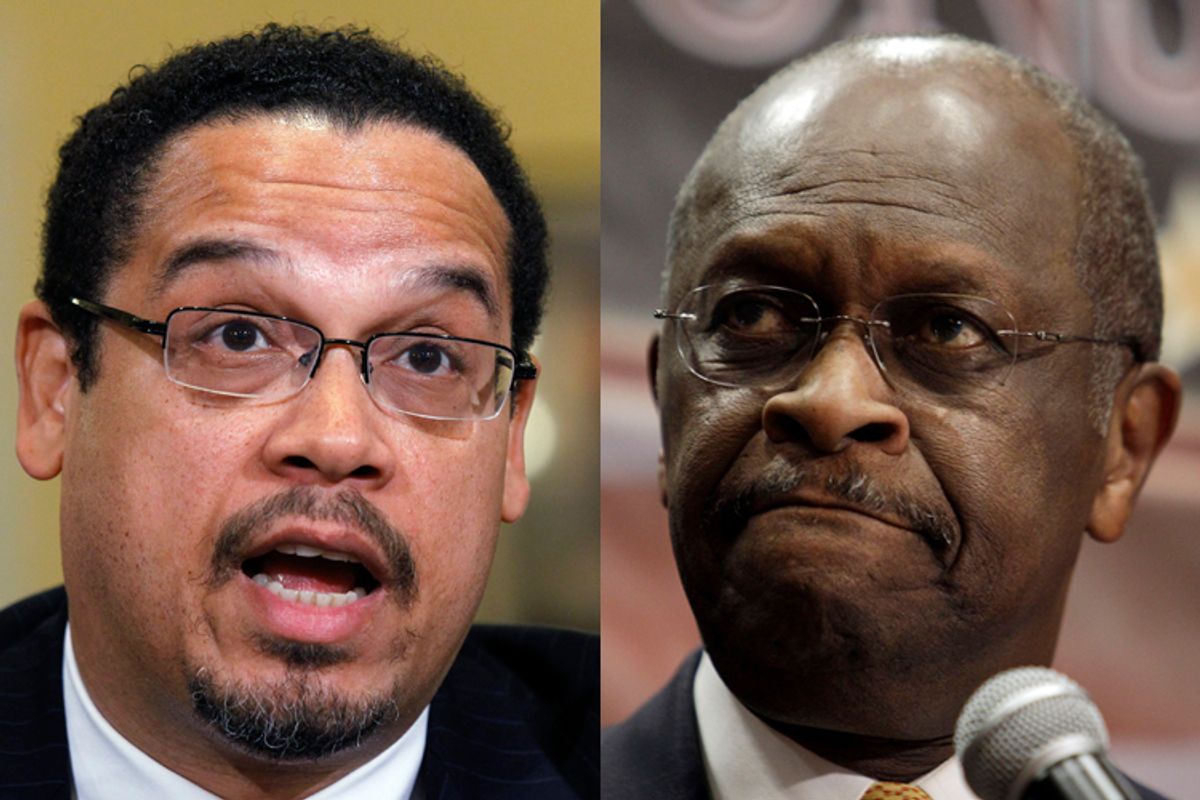 Over the past few months, former Godfather's Pizza CEO Herman Cain has carved out a place as the most prominent anti-Muslim figure in the GOP presidential field, and, arguably, the country.

First, earlier this year, he promised he would not hire any Muslims to be in his future cabinet, subsequently repeating various versions of that pledge. Then, on a trip to Tennessee last week, Cain came out against the construction of a mosque project there. On Fox News Sunday, he expanded that stance, endorsing the idea that any American community could bar construction of mosques.

To get a response to Cain's new comments, I spoke to Rep. Keith Ellison, D-Minn., who is one of two Muslim members of Congress and who has emerged in recent years as a loud anti-anti-Muslim voice.

"It seems like a week doesn't go by without Cain saying something incredibly offensive, so I can only guess that he's doing it on purpose," said Ellison. "He's probably figured out that he can get headlines if he says something really ugly, so he doesn't disappoint."

Ellison said he feels moved to address these issues because when people "start whipping up hatred against a certain group over the course of years, bad things happen. History teaches us that if you continue to stir the pot, stir the cauldron, it will not be long before something awful happens."

A partial transcript of our conversation follows.

What's your reaction to Herman Cain's comments on Sunday that communities should be able to ban construction of mosques?

This is ridiculous and has no foundation in American law. In fact, the U.S. Constitution says Congress shall make no law establishing a religion and shall not abridge the exercise thereof. He runs right into the First Amendment. But the larger question is, why is he trying distinguish himself as the religious bigot of the presidential race of 2011 and 2012?

I have no idea. It's not a new trick. Back during Obama's first run they tried to accuse him -- and I put "accuse" in quotation marks -- of being a Muslim, and this is a strategy that obviously failed. And yet they continue with this religious bigotry. It seems to be a strategic move on their part. I don't know if Herman Cain is just a sick individual, or if he is using bigotry to strategically move his campaign forward. But in either case it's reprehensible that he just will not relent with this bigotry and that he actually thinks it's going to enhance his chances to get the Republican nomination. If I were a Republican, I would be outraged. Anyone who cares about religious liberty and inclusion has got to be offended by Herman Cain.

No. But I can't imagine that it would make any difference. Take him -- and you can even add Newt Gingrich to the list -- these guys are not without resources. If they want to know something, they can find it out. If they want access to people to give them information, they can get it. They're saying this even though they know what they're saying is likely to antagonize and inflame people. I have to say, it's a scary prospect. A lot of times ideas take years to germinate. But if you keep whipping up hate and hysteria against a religious minority long enough, catastrophic things can happen.

Even though we're coming up on the 10th anniversary of 9/11, these comments from Cain and Gingrich, and the whole Park51 controversy last year seem to mark something new. Do you have any theories as to why all of this happening now?

There is an anti-Islam industry in the United States, and it's also active in Europe. The individuals who are associated with those movement are people like Pam Geller, and Robert Spencer. Stop the Islamization of America is a website/organization that the Southern Poverty Law Center has labeled a hate group. There's a cast of characters. There's Frank Gaffney -- he is so outrageous he tried to expel [former Bush aide] Suhail Khan from the Conservative Political Action Conference for no reason other than he's a Muslim. So you have Muslim Republicans that are being attacked for their religion alone. So you have an organized hate group that is actively trying to manipulate fears, they go into local communities and whip up hatred. They have a whole movement around the country to ban Shariah law. They often market themselves as counterterrorism experts. They have been receiving honoraria from police departments and various law enforcement agencies, some from the federal government ...

America has a history of free expression, so I don't really mind that these people exist -- they should be allowed to exist. The thing that bothers me is that, they keep this up for a few years, and then -- catastrophic things have been known to happen. This country interned Japanese people. It's impossible to believe it could have happened, but it happened.

Earlier this year Allen West criticized you on the radio for being Muslim. What's it like serving in the House with him and some other members who seem to be openly hostile to your religion? Is it awkward?

It's important to note that, when I was in the Minnesota state Legislature, this never came up. I've been a Muslim since I was 19 years old. And I've been going to nearly the same mosque since I was 22 years old. So people who wanted to know what my religion was -- it was well known. But it was not an issue for anyone, at all. When I ran for Congress, it became a big deal. Some people even accused me of trying to avoid the issue, but I really wasn't trying to avoid it; it's just that I was much more animated by issues of economic justice, addressing wage disparity, getting us out of Iraq, trying to reorganize the economic system to benefit the middle class as opposed to this plutocratic system we seem to be lurching toward. Those are the things that really got me interested and excited. And yet, you know, I've been pulled into this issue of dealing with Islam and religion all the time. It's not a role I seek, but it's also not a role I can afford to run from ...

I'm actually not standing up on this issue simply because I happen to be a Muslim. This is an issue that I hope I would be as on the side of religious liberty no matter who it was targeted against. To me it's just fundamentally disrespectful to the Constitution. It ignores our whole history of civil rights and inclusion in this country.