A party divorced from sanity 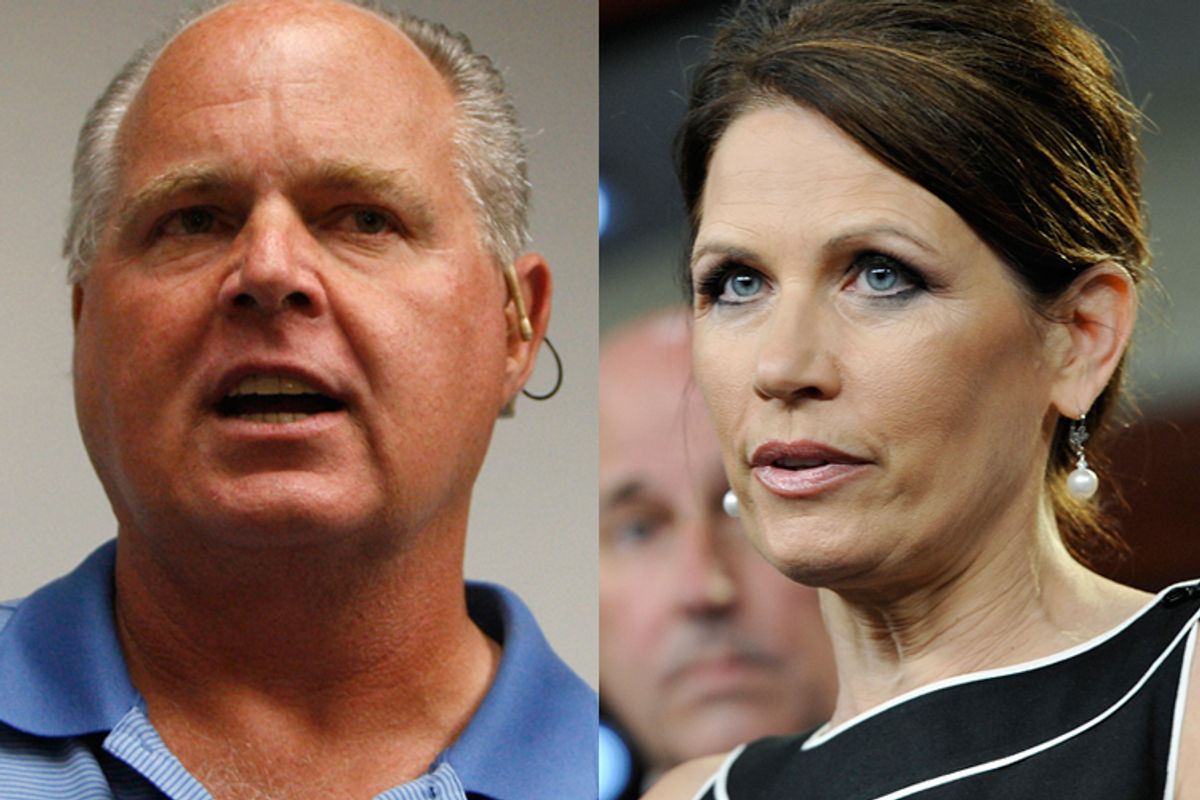 No wonder people are cynical. The nation increasingly appears to be governed by cheap political theater: made-for-TV melodrama more like professional wrestling than actual combat. As I write, the United States allegedly hovers on the edge of a fiscal crisis.

Should Congress fail to raise the National Debt limit between today and Aug. 2, the government will default on its debt for the first time in U.S. history -- a cataclysmic event, should it happen.

Dressed in his big boy suit, Republican House Speaker John Boehner put it this way on CBS News' "Face the Nation" back on May 15:

"I understand what the President was saying about jeopardizing the 'full faith and credit of the United States.' That's why I've said in every public and private utterance that our obligation is to raise the debt ceiling ... We could see the end of our economy if we don't act."

True, Boehner reads from a different script sometimes. Meanwhile, President Obama has made similar noises all along. Never mind that debt default by the world's largest economy could trigger a worldwide depression. Last week he told CBS that a failure to raise the debt limit might mean he couldn't guarantee Grandpa’s Social Security checks. In keeping with the time-honored precepts of Washington theater, Republicans cried foul.

Here are the facts: As of Aug. 3, according to the Washington Post, the Treasury Department is scheduled to issue 25 million Social Security checks totaling roughly $22 billion. Tax revenues are expected to total around $12 billion, leaving the government $10 billion in the red.

That's not counting Medicare, Medicaid and national defense, programs that along with Social Security account for almost 60 percent of federal spending. Not to mention the 5.9 percent that goes to pay interest on the debt, 4.6 percent for unemployment insurance, 3.1 percent for veterans benefits -- along with the National Weather Service, the IRS, FDA, FAA, etc.

It follows that to believe this "crisis" is real requires believing that come August, post offices, airports, federal courthouses and even prisons from sea to shining sea could become subject to the equivalent of rolling blackouts, adding many thousands of government employees to the ranks of the unemployed.

So no, absent mass political psychosis of the kind historian Barbara Tuchman described in "The Guns of August," it's not going to happen. As with the threatened "government shutdown" TV talking heads got so excited about a few months ago, a face-saving last-minute solution will be announced. In that sense, your brother-in-law who's paying more attention to the major league trading deadline also coming up at the end of July definitely has his priorities in order. Hey, a World Series could hinge on a couple of deals.

The debt limit's strictly a pseudo-event. It's all about positioning for the 2012 presidential election, nothing else. An entirely superfluous law -- Congress can trim individual programs at will -- the debt limit's been raised 89 times in the 72 years since it was enacted. Under George W. Bush, every Republican leader now posturing dramatically on the brink -- Boehner, Cantor, McConnell, etc. -- voted to increase it seven times. It wasn't really an issue.

As of this writing, furthermore, the face-saving plan likeliest to be enacted couldn't be better calculated to increase public cynicism. Under a scheme proposed by GOP Minority Leader Sen. Mitch McConnell, President Obama could raise the debt limit at his discretion, subject to congressional votes of disapproval. That way, Greg Sargent explains, Republicans could "repeatedly vote against raising the debt ceiling without actually stopping it from being raised."

See, sane Republicans know perfectly well that default's unthinkable. Alas, much of the Republican base has been persuaded by the likes of Rush Limbaugh and this year's GOP pinup girl, Michele Bachmann -- cuter, smarter and crazier than Sarah Palin by half -- that it isn't even a major problem. Of course, Bachmann too may be posturing, serene in the knowledge that default won't happen.

Hence McConnell's excellent plan, Sargent writes, "provides for Republicans to vote to 'disapprove' of each debt ceiling hike ... But since they need a veto proof majority to block each debt limit hike, those 'disapproval' votes won't actually stop the hikes from happening -- keeping the business community happy and averting economic and political disaster."

Except that Tea Partyers won't fall for that. They're itching for a showdown. Conservative columnists like David Brooks have begun complaining that the congressional Republicans who began this lamentable charade have committed the unpardonable sin of believing their own bull ... um, propaganda.

Can he muddle his way to victory? That's unclear.