Democrats are upset at reports of a deal with $3 trillion in cuts, and no new revenues 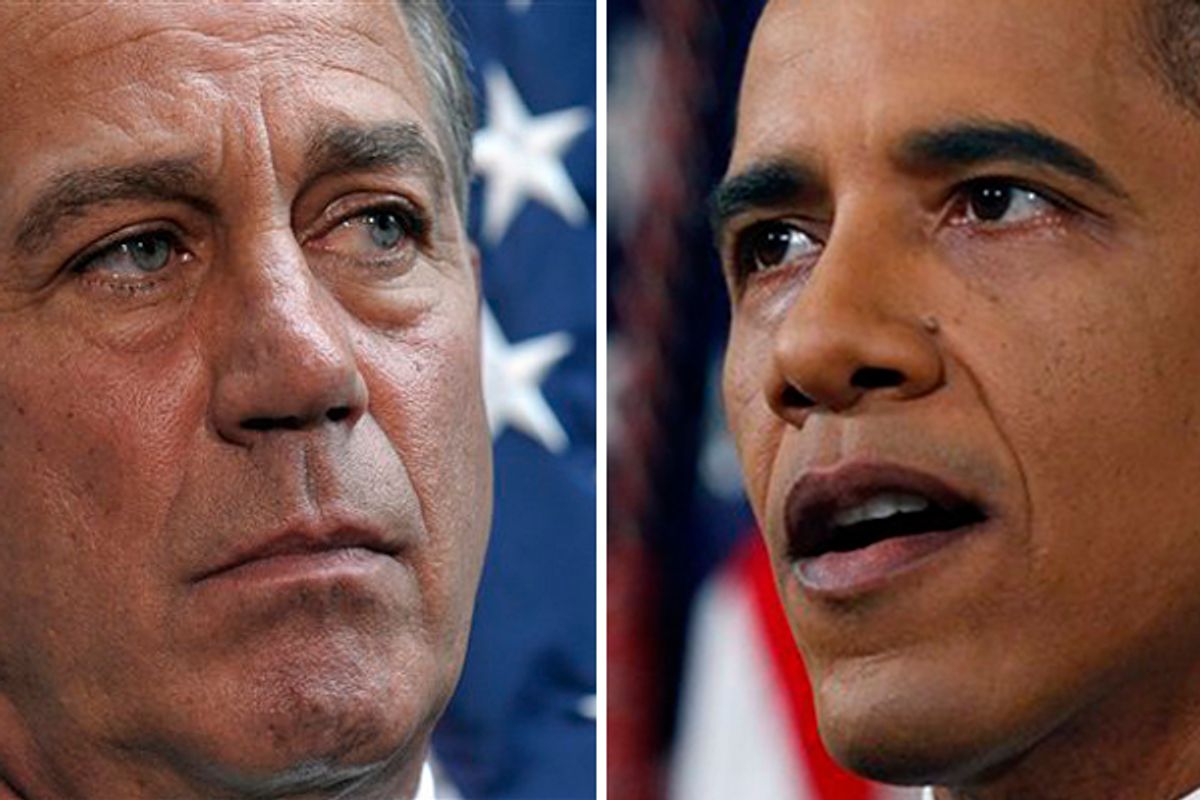 How often do you get to see a front page breaking news New York Times story shot down before it's even published? At 12:38 EDT on Thursday, the Times tweeted a news alert: "Obama and Boehner Close to Major Budget Deal, Congressional Leaders Are Told." But in an indication of just how overheated the debt ceiling news cycle is right now, before the Times managed to publish its own story on the news, both Speaker of the House John Boehner (via tweet) and White House Press Secretary Jay Carney (via press briefing) declared that there was no deal.

It's probably smarter to trust the Times than the public statements of elected officials. Boehner still has to give lip service to the "Cut-Cap-and-Balance" bill passed by the House on Wednesday -- the Senate's vote is scheduled for Saturday, and it's unlikely that any real deal will get announced before then. As for the White House, if the details leaking out describing the contours of the current state of play are accurate, then Obama also has reason for reticence. Numerous media outlets are reporting that the White House is offering $3 trillion in spending cuts -- with no revenue increases at all.

Neither grand, nor a bargain. If the reports are true, then Republicans have won the game of debt ceiling chicken.

Democrats were told Wednesday night that Obama is prepared to cut a deal with Boehner that would include spending cuts and concrete entitlement reforms, according to two senior Democratic aides.

The aides said the deal would only include the promise of tax reform next year. This would represent a major concession, the aides said, since it would not include any concrete revenue increases as part of the deal.

At the Huffington Post, Sam Stein offers a possible interpretation of what the "promise of tax reform" might mean:

The White House has laid out an alternative suggestion during past negotiations: Lawmakers would be required to find $800 billion in additional revenues over the next decade. If they could not find an agreement, then the Bush-era tax cuts for the high-end earners will expire.

The promise of tax hikes later in return for spending cuts now is dodgy in the extreme. Having achieved overwhelming success during this round, what leverage would Obama have to enforce the new revenue requirements in the future, aside from another huge political fight over the Bush tax cuts during the heat of a presidential campaign. And even in this scenario, the White House is still retreating from its earlier insistence on $1 trillion in revenue increases in exchange for spending cuts.

Bottom line: The White House continues to compromise, while Republicans stand firm. And why not? It keeps working!

The National Review reports that Senate leaders briefed by White House Budget Director Jack Lew are unhappy and it's not hard to understand why. (Hat tip: Jon Chait.)

Senate Democrats just wrapped up a meeting with OMB Director Jack Lew in the Capitol and they are not pleased.... Majority Leader Harry Reid (D., Nev.) told reporters that a call came in from the White House during the meeting to announce a "potential agreement" with House Speaker John Boehner (R., Ohio).

Reid appeared to confirm reports that the proposed deal would not raise significant revenue, at least in the near term, and indicated that he didn't think this would be acceptable to Democrats in congress. "The president always talked about balance, there had to be some fairness in this," he said, grimly. "This can't be all cuts. There has to be balance, there has to revenue and cuts."

I'm not in the habit of agreeing very often with the National Review, but its analysis stings with some ugly truth:

So, provided the reports are generally true, is Obama really willing to sell all Congressional Democrats down the river (apart from the moderates facing reelection in 2012) just to win another term? I think the answer is self-evident.

RT @pfeiffer44: Anyone reporting a $3T deal w/o revenues is incorrect. POTUS believes we need a balanced approach that includes revenues.