The reality star sues over a look-alike ad 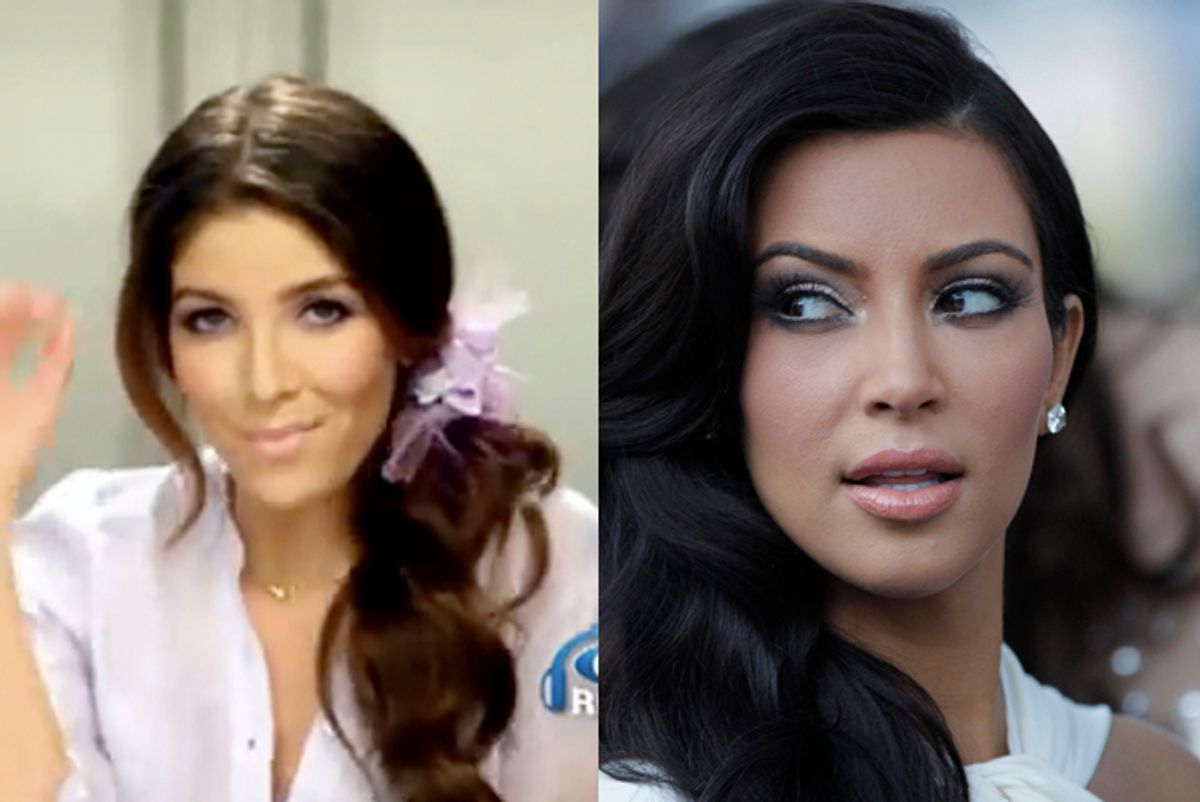 Melissa Molinaro in an Old Navy ad, and Kim Kardashian.
--

She's got long dark hair and a mile-wide smile, but that hot chick in the Old Navy ads is not self-described "internationally known celebrity, model, television personality, actress, entrepreneur and pop culture icon" Kim Kardashian. And she'd like a truckload of money to make sure you know it.

The reality star was apparently none too pleased when a new Old Navy "Super C-U-T-E" campaign, featuring a very Kim-esque diva, debuted last winter. Now she's seeking unspecified damages in a new lawsuit to make it stop. In the ad, which envisions a young lady as part of the world's most terrible singing group, The Audio Threadz, model Melissa Molinaro struts through a musical landscape of fabulosity, getting pedicures and charming her way out of parking tickets. Just like a Kardashian!

Miss Kardashian, whose family is set to launch a "fashion" "kollection" next month at Sears, surely wishes not to give offense to her budget retail masters. The appearance of endorsing Old Navy while she and her sisters have "poured our hearts and souls" into their Sears line could indeed prove bad for the brand.

The lawsuit claims that Kardashian "has invested substantial time, energy, finances and entrepreneurial effort in developing her considerable professional and commercial achievements and success, as well as in developing her popularity, fame, and prominence in the public eye." The Old Navy campaign, the suit suggests, somehow undermines that. What, do you take her for some wanton shill or something, America? As she said in a statement to The Hollywood Reporter this week, "I've worked hard to support the products I'm personally involved with and that I believe in." And not everything has the integrity of Carl's Jr. Or Reebok EasyTone. Or Sketchers. Or Quick Trim. Or Midori Liqueur. Yes, when you think discernment, you think Kim Kardashian.

It's not beyond the realm of possibility that the Old Navy ad was in its way an homage to a certain kind of celebrity. And a lady's got a right to protect her image, especially when she's at the apex of her fame. One day you're a big enough star to take on Hallmark for using the phrase "That's hot" and the next, you're storming off an interview because you've been called a has-been. So enjoy it while it lasts, dear.

But not every bubbly brunette is a Kim clone. And that Molinaro girl's badonkadonk is definitely not Kardashian issue. More significantly, though, how could anyone watch a horribly cheesy ad that features a hot white chick singing and dancing around with a bespectacled African American man, and not know that if anyone should be offended here, it's the Black Eyed Peas.