When I wrote about a medical mix-up, it became the shot heard round the Internet 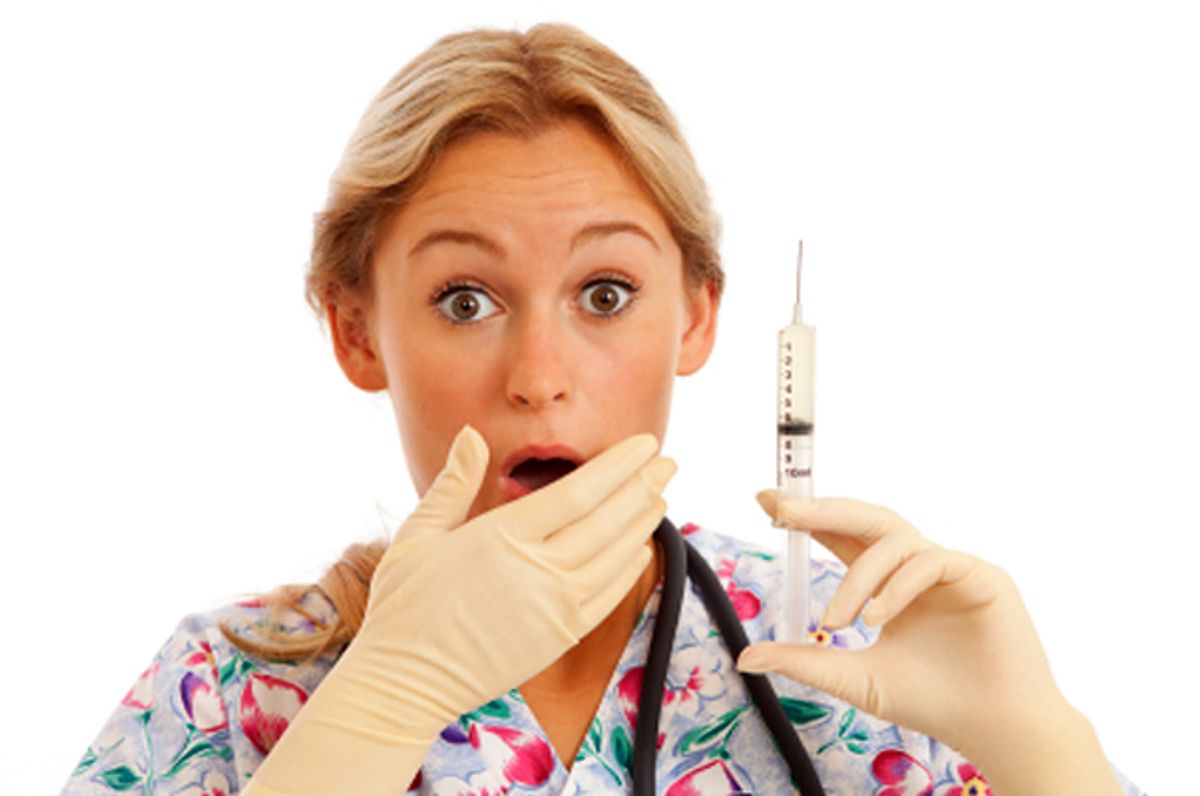 When you've been engaged in daily, often highly personal journalism for a few years, you can pretty much anticipate the critical responses to your pieces before you've even filed them. Thanks, readers, you're there in my head all the time.

So I knew when I told my editor I wanted to write a piece about my daughter's recent experience with getting the wrong vaccine at her annual checkup that I'd be in for flak. But I wrote it anyway, because I felt strongly about two key issues of the story. If you're going in for any procedure, drug or vaccination, take a moment to double-check that the person administering it is giving you what you're there for. Also, I believe my daughters should have final say in whether or not they receive the HPV vaccine. And flak, indeed, I got.

But even I was surprised this morning when writer Amanda Marcotte took some mighty big umbrage on Twitter, who began by calling piece an "overreaction" and then proceeded to engage in something that looks remarkably like overreacting.

"A single tear shed over this causes everyone else to wonder if you don't have real problems," she wrote. "I'm honestly not invested in freaking out on an innocent mistake that resulted in no real problems... I mean, I have real shit to deal with in my life... If that's the most awful thing you've learned at 11, you live in a big time bubble.... I'm sure her mother's reaction to it had nothing to do with the little girl thinking this was the worst thing ever."

Author Katha Pollitt also jumped into the fray, calling the story "ridiculous." Not the review I'd wish for, but all right. But I'd like to correct her assessment that "I just felt this woman was hyperfreakout helicopter parent, infecting her kids with anxiety."

Let's go to the story, shall we? Yes, I said I was "deeply unnerved" by an unexpected call in the presence of my children, and that I spoke "tersely" to the doctor. I'd imagine that when the first thing your doctor says, "We gave your child the wrong vaccine" you might react likewise, especially when you know she's allergic to certain things, like penicillin. She's already spent half a day in the emergency room this year from a bad antibiotic reaction. Did I yell, cry or browbeat anybody? No. Was I mad? Oh hell yeah. A medical error regarding one's child is not so instantly shrugged off.

I also mentioned that I'd been mouthing reassurances to my kids during the whole phone call. I went on to describe having a conversation with my daughter about HPV and the vaccine, getting a trusted other doctor's opinion about what had happened, and then my child's ultimate decision to proceed with the course of vaccination. In the end, I called the whole thing "a relatively minor scare."

I also said that my daughter cried. She did. She was mad about the mix-up, and concerned not just about what did happen, but the prospect of what could have gone wrong in such a situation. She didn't think it was "worst thing that ever happened," nor does she live in a "big time bubble." Last year, at age 10, she had to watch her mother go through life-threatening cancer. This year, she lost her grandfather and an uncle. She dealt with it all while enduring the utterly appalling New York City public middle-school admissions process and bidding farewell to the school and friends she's had since kindergarten. Frankly, she handled it all with more class and grace than most adults I know could muster. And as far as I'm concerned, the kid can cry whenever and wherever she wants, as much as she wants, and over anything she damn well feels like.

I said as much to Pollitt and Marcotte on my own Twitter feed, pointing out that my kids happened to be present to hear the whole conversation, with the doctor and adding "Don't speculate about the 'bubble' we live in, when my concern was letting her make her own choices" because "I believe a girl should have a say in her own optional vaccinations." I stand by that. I boss my kids around plenty, but in this regard, it's their bodies and their boundaries. It's a medical issue and a feminist one.

Despite the fact that my story ended with my daughter deciding to proceed with a vaccination that I clearly stated I endorsed, to prevent a virus I clearly stated has made me endure two medical procedures and ongoing monitoring, Marcotte also informed her followers that the piece "unfortunately lends itself to anti-vaccination hysteria." She went on, "There is enough unwarranted hysteria over the 'sex vaccine'... It should be mandatory. Hysteria about sex is why it's not. Only 11% of girls are getting this life-saving shot... autonomy is just a red herring. The hysteria over the vaccine is about sex. this is a public health crisis & adding hysteria doesn't help." Wow, that's a lot of hysteria. And pssst, Amanda -- she who smelled it, dealt it. Also: Choosing vaccinations is not the same as refusing them.

Not all the feedback was negative. My former Salon colleague Kate Harding, however, made the point I'd hoped to express, and in well under 140 characters to boot. "Stunned at how many people in my timeline would have no problem at all w/child getting the wrong vaccine, as long as it's a good one." And Angus Johnston said, "I think it's utterly reasonable for a parent to want to choose when and how she discusses the HPV vaccine with her daughter."

I've admired both Marcotte and Pollitt's writing in the past and will no doubt continue reading them. And if anybody wants to disagree with what I've written, have at it. I do the same to other writers all the time. Look, I'm doing it now! But do us a favor and don't waste time criticizing what I didn't say or even implied, or by using hyperbolic speculation. Because when you critique other females using inaccurate words like "hyperfreakout" and "hysteria," you're not exactly doing wonders for the case that women can engage in rational conversation about serious issues.