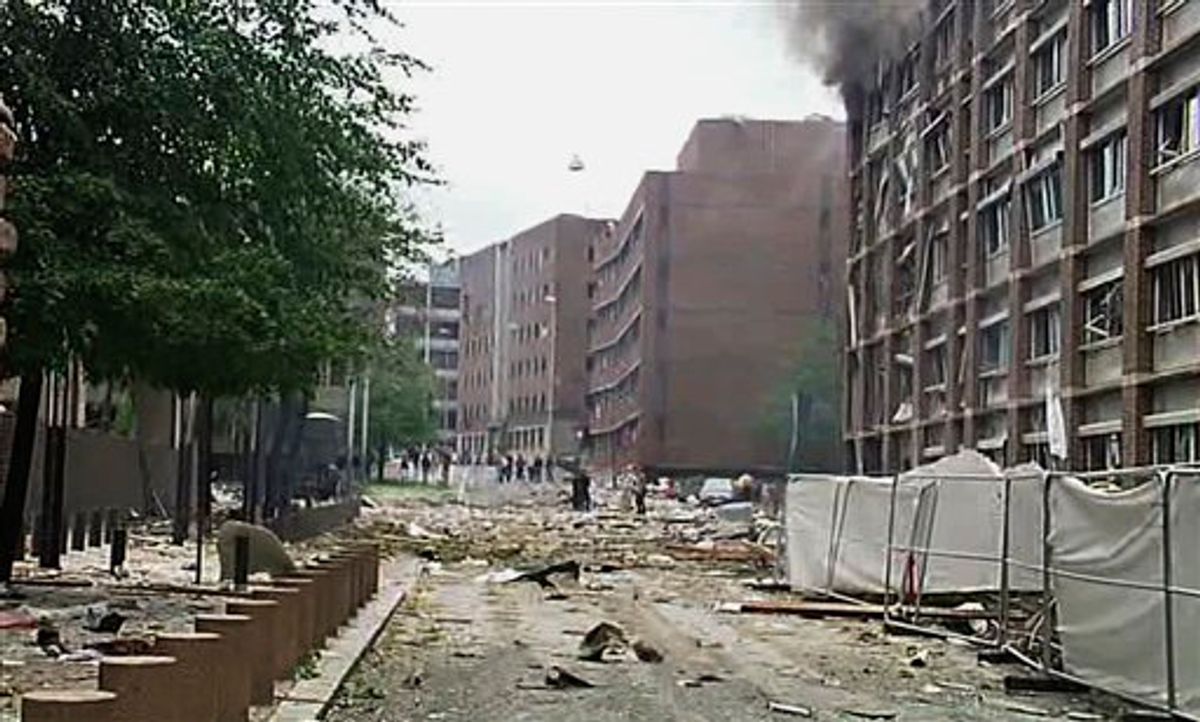 In this video image taken from television, smoke is seen billowing from a damaged building as debris is strewn across the street after an explosion in Oslo, Norway Friday July 22, 2011. A loud explosion shattered windows Friday at the government headquarters in Oslo which includes the prime minister's office, injuring several people. Prime Minister Jens Stoltenberg is safe, government spokeswoman Camilla Ryste told The Associated Press. (AP Photo/TV2 NORWAY via APTN) NORWAY OUT (AP)
--

Terrorism struck long-peaceful Norway on Friday when a bomb ripped open buildings including the prime minister's office and a man dressed as a police officer opened fire at an island youth camp connected to the ruling party. At least seven people were killed in the blast and a witness said more than 20 died in the shootings on the nation's worst outpouring of violence since World War II.

Andre Scheie told Norwegian broadcaster NRK that he saw "very many dead by the shore" of the camp on Utoya island, where the youth wing of the Labor Party was holding a summer camp for hundreds of youths. He said some victims were shot in the water after trying desperately to swim away. "There are about 20 to 25 dead," he said.

Police did not immediately confirm the account. but Inspector Bjoern Erik Sem-Jacobsen said a suspect in the shooting has been arrested. He said the gunman, who was dressed as a police officer, pulled out a gun and started firing into the crowd of youths.

A square in Oslo, where the Nobel Peace Prize is awarded, was covered in twisted metal, shattered glass and documents expelled from surrounding buildings, which house government offices and the headquarters of some of Norway's leading newspapers. Most of the windows in the 20-floor high-rise where Prime Minister Jens Stoltenberg and his administration work were shattered.

Stoltenberg was working at home Friday and was unharmed, according to senior adviser Oivind Ostang.

Ian Dutton, who was in a nearby hotel, said the building "shook as if it had been struck by lightning or an earthquake." He looked outside and saw "a wall of debris and smoke."

Dutton, who is from New York, said the scene reminded him of Sept. 11 -- people "just covered in rubble" walking through "a fog of debris."

"It wasn't any sort of a panic," he said, "It was really just people in disbelief and shock, especially in a such as safe and open country as Norway, you don't even think something like that is possible."

Public broadcaster NRK showed video of a blackened car lying on its side amid the debris. An AP reporter who was in the office of Norwegian news agency NTB said the building shook from the blast and all employees were evacuated. Down in the street, he saw one person with a bleeding leg being led away from the area.

Oslo police said the explosion was caused by "one or more" bombs, but declined to speculate on who was behind the attack. They later sealed off the nearby offices of broadcaster TV 2 after discovering a suspicious package.

At Utoya, an island outside Oslo, a gunman dressed in a police uniform opened fire at a summer camp, shooting several youths, party spokesman Per Gunnar Dahl told The Associated Press. The annual camp is organized by the youth wing of Stoltenberg's Labour Party.

"There has been an incident where a man dressed in a police uniform started shooting among the youngsters on the island. This created a panic situation where people started to swim from the island" to escape, he said. Dahl said unconfirmed reports said five people were hit.

"I saw three or four injured people being carried out of the building a few minutes later," Pedersen told AP.

In Washington, State Department spokeswoman Heide Bronke Fulton called the violence "despicable." There has been no confirmation of any U.S. casualties, she said. The U.S. Embassy in Norway warned Americans to avoid downtown Oslo.

The U.S. has offered help to Norwegian authorities but there has been no specific request for assistance, she said.

The attacks come as Norway grapples with a homegrown terror plot linked to al-Qaida. Two suspects are in jail awaiting charges.

Last week, a Norwegian prosecutor filed terror charges against an Iraqi-born cleric for threatening Norwegian politicians with death if he is deported from the Scandinavian country. The indictment centered on statements that Mullah Krekar -- the founder of the Kurdish Islamist group Ansar al-Islam -- made to various news media, including American network NBC.

Terrorism has also been a concern in neighboring Denmark since an uproar over cartoons of the Prophet Muhammad six years ago. Danish authorities say they have foiled several terror plots linked to the 2005 newspaper cartoons that triggered protests in Muslim countries. Last month, a Danish appeals court on Wednesday sentenced a Somali man to 10 years in prison for breaking into the home of the cartoonist.