Pick of the week: Fassbinder's dazzling, dystopian "World on a Wire"

Nearly unseen since the '70s, the great German director's "World on a Wire" connects "2001" to "The Matrix" 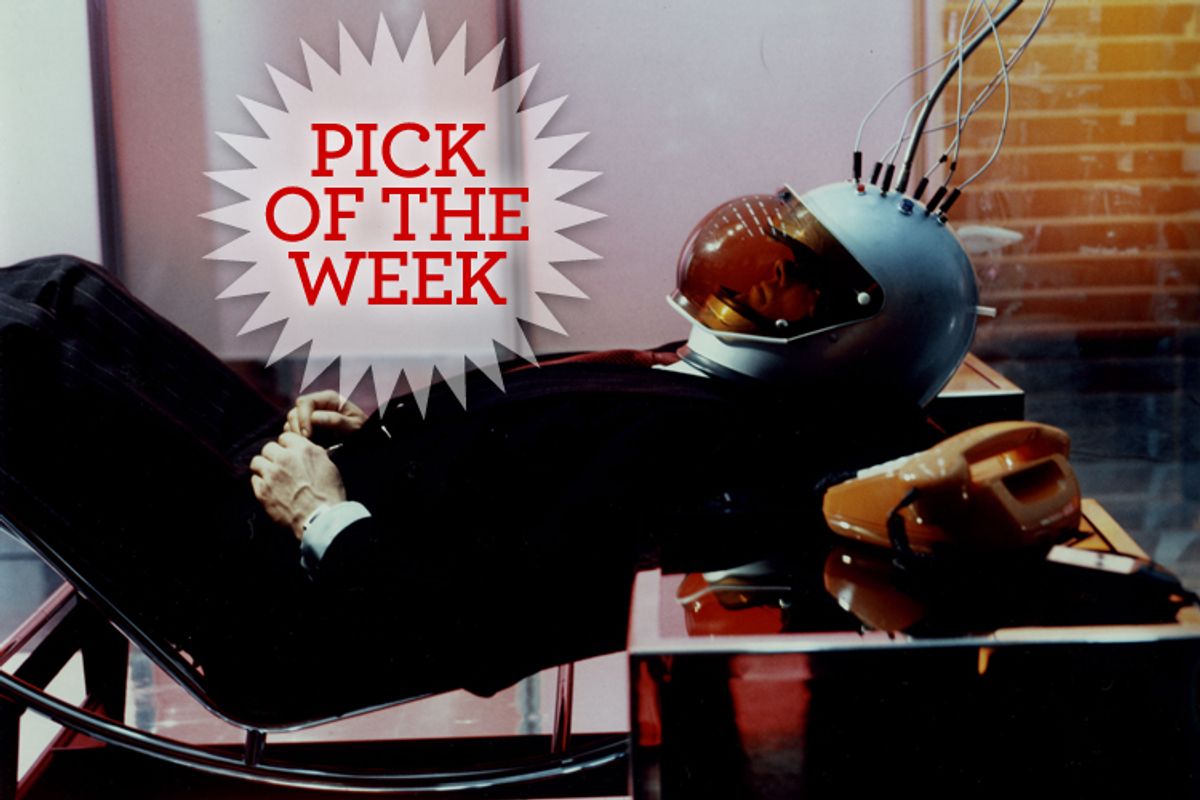 What the indifferent acting and low-budget technique of Rainer Werner Fassbinder's long-unavailable 1973 "World on a Wire" can't conceal is that this is a major rediscovery in speculative science fiction, a conceptual missing link between Stanley Kubrick's "2001: A Space Odyssey," Ridley Scott's "Blade Runner" and the Wachowski brothers' "Matrix" trilogy. Indeed, while the thematic consonance between "World on a Wire" and "Blade Runner" is probably coincidental (and comes from the shared influence of Philip K. Dick), I'm guessing that the Wachowskis took direct inspiration from Fassbinder's film, which is structurally, philosophically and even politically very close to the world of "The Matrix."

Since Janus Films' gorgeous 35mm restoration of "World on a Wire" opens this weekend in New York, Washington and Dallas only, and then will make a number of brief stops in theaters across the country before eventual release on DVD (which might be a year away or more), I want to both build up anticipation and tamp down expectations. First of all, this is a mini-masterpiece of the 1970s European design aesthetic and a major addition to the immense and baffling oeuvre of Fassbinder, the bigger-than-life legend of New German Cinema who died of a drug overdose in 1982. (Not-so-fun fact: Dead almost 30 years, Fassbinder would be younger than George Lucas or Martin Scorsese if he were with us today.) Many of the director's preoccupations are evident here: Voluptuous blondes and half-naked black men, the influence of tough-guy American film noir, an almost abstract approach to the human form in relation to technology that suggests fashion photographer Helmut Newton and the proto-electronic band Kraftwerk (who both emerged from the same German cultural moment).

But fair warning: We're not talking about the plot-centric rhythms or pacing of a Hollywood movie here. I found "World on a Wire" completely hypnotic, and it definitely tells a story. But Fassbinder is in no hurry to get from point to point, and his laconic scientist hero, Fred Stiller (Klaus Löwitsch), is too busy boozing and juggling haunted-looking, affectless dames to realize what everyone watching will figure out inside 15 minutes. "Call me," he tells one hopeful-looking young lady at a hilariously cheesy indoor pool party, by way of brushing her off. "I'm in the telephone book." (From this point onward, I'm going to discuss major plot developments in "World on a Wire," although I won't give away the ending or anything.)

Stiller is the technical director of a sinister corporation called IKZ, which has created a highly sophisticated computer-simulated world whose digital inhabitants are self-aware and don't realize that they're not real. Or, not to get ahead of things, let's just say they don't realize it at first. Stiller's boss, the impressively-sideburned tycoon Herbert Siskins (Karl-Heinz Vosgerau) wants to whore out the Simulacron to corporate interests, who are eager to use the model to predict future market trends, and Stiller, manly individualist that he is, resists. Somehow he doesn't see the fact that his predecessor died under mysterious circumstances, and that the firm's security chief has not just vanished (in the middle of a conversation) but has been erased from everyone's memories, as signs of -- what shall we say? -- systemic instability. Maybe Stiller can't hear the miscellaneous musical soundtrack degenerate into an ear-splitting electronic shriek at moments of reality meltdown, the way we can. Let me reiterate that this often-startling tale of virtual reality and corporate corruption was written in 1973. (Fassbinder and co-writer Fritz Müller-Scherz adapted the novel "Simulacron 3" by Daniel F. Galouye, although by the director's account they went much further than the source material had.)

As a sit-down theatrical experience, "World on a Wire" has a daunting running time of three-and-a-half hours, but Fassbinder made it as a two-part film for West Germany's WDR network, and many home-video viewers will likely end up consuming it that way. That said, once you adjust to Fassbinder's leisurely pace and the distinctive early-'70s atmosphere of sexy, paranoid cool, you may not want to stop. I watched the whole thing through in one sitting without remotely getting bored, and can't wait to see it again. What you might call Stiller's "Morpheus moment," when an escaped avatar from within the Simulacron -- a hook-nosed, depressive poet-type named Einstein (Gottfried John), because he's the one digital being allowed to understand his own nature -- tells Stiller the truth about his own world, comes all the way at the end of the first episode, 100-plus minutes in.

I would argue that it's totally worth the wait, and that "World on a Wire" is far more about the journey than the destination. To go ultra-high-concept for a minute, Fassbinder is launching a post-Marxist or Situationist or phenomenological critique of reality, using his easily seduced macho-man hero as a stand-in for all of us. Stiller is genuinely in love with Eva (Mascha Rabben), his late boss' willowy daughter, and tempted by his Playmate-worthy secretary, Gloria (Barbara Valentin), even though she is clearly Siskins' agent, and flattered by Siskins' present of a "dream car" (a Corvette, of course, not some pussyish, sensible German car). And so are we, because all that eye candy, like the sleek, high-modernist headquarters of IKZ -- actually a Parisian office building -- is delicious on its own terms. But what are its terms? Who created this "reality" and whom does it benefit? And what is our degree of knowledge and/or complicity?

Those are the questions that Stiller and his creator -- and just to keep playing the game, whatever software engineer, in the world above ours, created the self-destructive, romantic-ironic genius known as Rainer Werner Fassbinder -- tackle in the second half of "World on a Wire," which is a lot of things at the same time. It's rushed and clumsy and occasionally frustrating, but also frequently spectacular and, in the end, surprisingly moving. Original cinematographer Michael Ballhaus (who would go on to shoot most of Scorsese's best films) has supervised this meticulous restoration, under the aegis of the German government, the Museum of Modern Art and the Rainer Werner Fassbinder Foundation. Let me repeat the standard disclaimer that this won't be every science-fiction fan's cuppa schnapps-laced Teutonic coffee, and that if your favorite stuff in "The Matrix" was the slo-mo "bullet time" effects, this just isn't that kind of motion picture. (What brief action scenes there are in "World on a Wire" are laughably and perhaps intentionally bad.) But if you're still with me -- and can face the truth about life inside Simulacron -- you know what to do.