The president wins another round

But with liberal support at risk, Obama should think twice about a "grand bargain" to cut entitlements 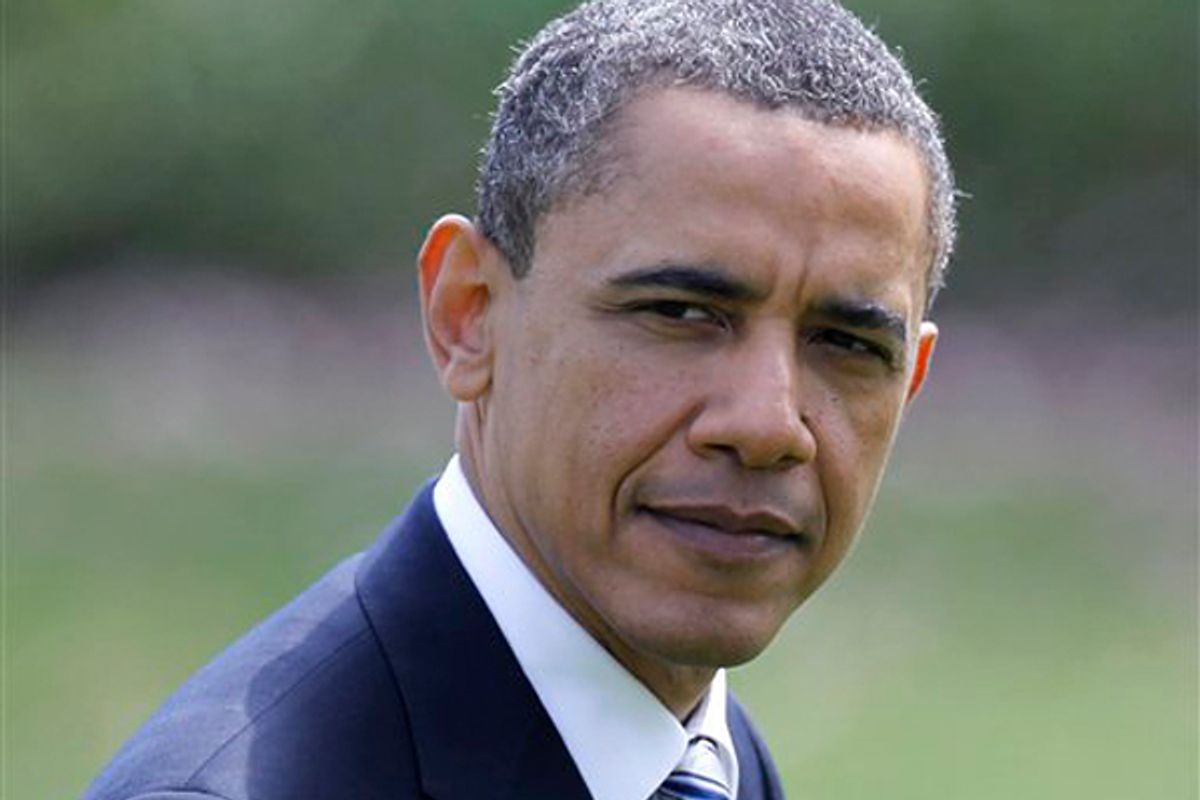 Red-faced and embattled, House Speaker John Boehner grabbed a podium Friday night to deny President Obama's accusation that Republicans once again walked away from a "grand bargain" that would have slashed spending and even cut entitlements to get a debt-ceiling deal, in exchange for a much more limited package of "revenue" increases. Boehner looked silly. The president exuded righteous anger; Boehner exuded cliches and moral confusion.

I have no idea how close Obama and Boehner really got to a deal. Personally, I am hoping a "grand bargain" is impossible; it's terrible for Americans who are struggling in this economy, and it's terrible for Democrats politically. For months now, despite the angst of high-profile progressive pundits and activists about President Obama's many compromises with Republicans over the last two years, his staunch defenders have been able to point to steady, solid support from his liberal base. But that support, while still high, is looking less solid: A CNN poll released Friday found that Obama's approval rating has dropped as the stalemate over the debt ceiling continues – and that much of the drop is attributable to a decline in support among liberals. News that Boehner once again backed out of compromise talks could help the president by taking a base-demoralizing, entitlement-cutting "grand bargain" off the table, but no one knows how this drama will end.

In a comparable CNN poll two months ago, 82 percent of liberals said they approved of Obama's performance as president; only 16 percent disapproved. In the CNN poll released today, 71 percent of liberals approved and 27 percent disapproved. The percent of voters who said they disapproved because Obama's policies aren't liberal enough doubled, to 13 percent. Obama's approval-rating among voters who aren't white also declined, from 75 to 63 percent, and the percent of non-whites who disapproved because the president's policies are insufficiently liberal is 17 percent, compared to 11 percent for whites.

None of those numbers spell disaster for the president. His May approval ratings were a bit higher than normal; these numbers, though, are significantly lower. They may be a one-month dip as a result of the depressing debt-ceiling stalemate, in which Democrats feel they have to compromise with Tea Party economic terrorism or else see the economy return to recession, or worse. But the dip isn't good: Obama will need the avid support of his most loyal backers if he's going to be re-elected despite the worst unemployment since the early 1980s. Unfortunately, all of the compromises being considered to resolve the default crisis are likely to make unemployment worse, not better.

And while Obama supporters insist the president would never cut Social Security or Medicare, that he's merely been exploring every possible route to a deal with the GOP (some even suggest he's faking them out), they ought to remember they're dealing with a completely unprincipled enemy. The great Digby noticed that right-wingers are already raising money attacking Obama for breaking his promise not to cut Social Security. Check out the conscience-free Erick Erickson's scurrilous fundraising appeal for the crackpot site Human Events, which is trying to start a Web-based campaign to reach younger voters with the "truth" about Obama:

It's the devastating truth that young voters will believe whatever Barack Obama tells them.

If I were counting on Social Security today, I'd be dead scared.

As I try not to hyperventilate over every leak and partial report about what the debt-ceiling "compromise" will look like, I find myself thinking more about Obama's references to Abraham Lincoln in that discussion with college students the White House released this week. The president's Lincoln remarks touched off a fascinating debate; you can see some of it in the letters about my first post here. Right now I'm less interested in what Obama's comments told us about his frustration with progressive critics than in what they told us about his views of his own straits: Does he feel like he's governing a nation that's on the verge of a civil war?

I'm not suggesting that Obama (or I) sees an impending future in which Americans take up arms against Americans. But I do think he rightly perceives himself as trying to steer the country through a period of profound polarization in which our institutions aren't working very well, to put it mildly. And it may feel something like civil war if you're the president. He was elected with more votes (63 million) than any president in history, and with a higher percentage of support (53 percent) than any first-time president since Lyndon Johnson (who doesn't count, since he finished John F. Kennedy's first term). But he's been blocked at every turn by an intransigent minority acting like the election was a virtual tie and Democrats were pretenders to power, instead of the party that controlled the White House, Senate and House of Representatives.

So if you're Obama looking to Lincoln as the man who tried to steer the United States through its worst domestic political crisis, and keep that crisis from destroying the country, what do you see? First, you see plenty of compromise. It's astonishing to look at all the things Lincoln tried, all of what he said in public and in private, in order to preserve the union and avoid war. Over the years Lincoln backed various schemes for gradual, compensated emancipation, in which slave states might free enslaved African Americans only gradually, and the federal government would compensate slaveowners. Even after his election, Lincoln expressed support for the Corwin amendment, which would have expressly prevented the federal government from outlawing slavery in states where it existed. Some try to depict that as Lincoln's hidden hypocrisy on the issue of slavery, but in fact, while Lincoln opposed slavery, he believed the Constitution already prevented the federal government from abolishing it in slave states – so if the Corwin amendment would reassure those states they didn't have to secede to protect slavery, Lincoln "had no objection to its being made express and irrevocable," he said in his first inaugural address. He also had no objection to voluntary colonization schemes, if efforts to send freed slaves to African or Caribbean countries might win some whites over to the anti-slavery side. He even set aside federal funds for a couple of such schemes.

None of Lincoln's attempts at compromise worked, however, and in the end he had to fight the Civil War. It was the course of the war itself that made Lincoln a staunch foe of slavery's existence, not merely its expansion. The war showed him the absolute intransigence of slaveholders, as well as the wisdom and the courage of African Americans who supported his war, despite his compromises on slavery, and who gave their lives fighting in it. The war taught Lincoln, albeit belatedly, that African Americans deserved not merely freedom from bondage but the rights of citizenship.

What does all this tell us about Obama and the current political impasse? If we didn't know it already, it shows that the president has a lot of patience, and a lot of faith in the value of compromise. I don't know whether he's just posturing when he says he's willing to talk about entitlement cuts. He might genuinely believe those programs need to be cut. Or maybe he believes Social Security and Medicare must be "strengthened," and if he trades some (slight) cuts that he truly believes won't hurt (many) people (very) much, he can do better things that will help more people with the political and fiscal capital he gains in a "Grand Bargain." At this point, though, that is faith-based politics at best. There is absolutely no evidence that anything of the kind will work. The only thing he hasn't done so far is act like a staunch Democrat, and take cuts to key Democratic programs off the table. That might not work either, but we don't know, because it hasn't been tried.

The president sincerely believes that the intense polarization of American politics isn't merely a symptom of our problems but a problem in itself – and thus compromise is not just a means to an end but an end in itself, to try to create a safe harbor for people to reach some new common ground. I actually have some sympathy with that point of view. But having now watched two smart Democratic presidents devote themselves to compromise with Republicans, only to be savaged with increasing intensity, I've lost faith that compromise itself holds some healing magic. Maybe it just emboldens bullies.

All of that said, I don't agree with Sen. Bernie Sanders that Obama's compromising with the GOP means he should face a primary challenge. I've said it over and over: The left invests way too much energy and drama in presidential politics. If you want a better Democratic president, elect better Democrats to Congress and state legislatures. A primary next year would be an exercise in self-destruction. But I can say that without wanting to destroy Sanders. I hope Obama's staunchest supporters can do the same.

(This piece was updated after Obama and Boehner's statements Friday evening.)