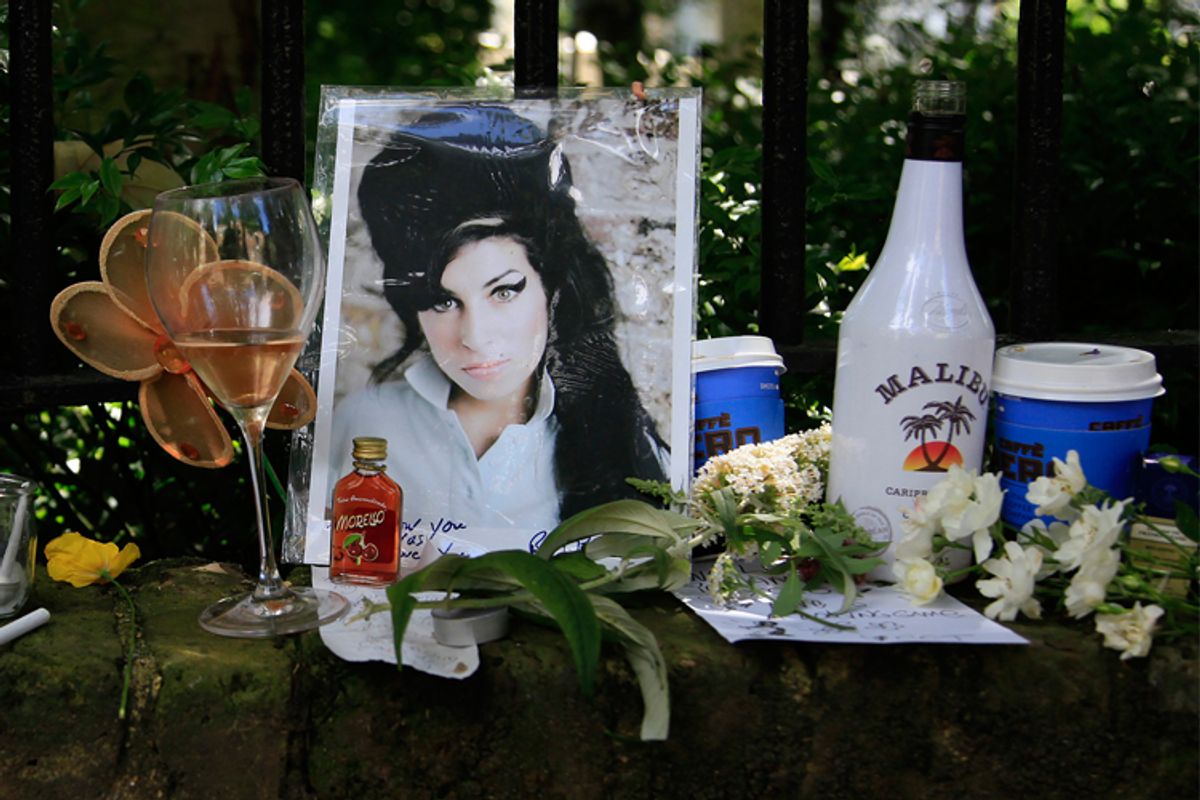 Flowers and tributes are seen outside the home of Amy Winehouse in London.
--

Amy Winehouse's untimely death on Saturday at age 27 has touched off a slew of media commentary. The demise of young stars is always hard to cover without speculation, so while most outlets reported the sparse details of Amy's last days while reminiscing on her best work, some, like the New York Post, took the traditional tabloid route of trying to determine what might have caused the singer's demise at such an early age. (So far, no cause of death has been released to the press.)

"The final straw may have been a lethal combination of booze and a 'bad' ecstasy pill, according to friends with her just before she was found dead," commented the paper, which also pointed to the quotes of a "close" source in the British Mirror:

"The fear is she deliberately took more than usual because she was past the point of caring whether she lived or died. Amy never wanted to die in obscurity, to die having never made a record as good as 'Back To Black.' It was almost as if she wanted to die young, to leave a legacy, and to be remembered for her music and her voice. Sadly, she was all too aware of the 27 Club and was never scared to join it."

The "27 Club" of famous musicians who all died at that unlucky age was also the focus of a Wall Street Journal Speakeasy blog post. Ann Marie Hourihane of the Irish Times used Winehouse's death to support a supposititious analysis that rock 'n' roll (and rehab) is tougher on women than men.

"It's different for girls, in a way that we don't yet understand. Maybe it's physiological, maybe it's social. If you want to see girls who look like Amy Winehouse, just watch the anorexic women walking, very carefully, around our psychiatric hospitals. These young/old women are her sisters in self-destruction."

In a more sentimental direction, there was Rolling Stone's collection of musicians' responses to the tragedy.

Russell Brand offered a thoughtful blog post on the trials of addiction, while M.I.A. and Big Boi released songs in tribute to Winehouse.

Big Boi's remix of "Tears Dry on Their Own":

Courtney Love, impressively, found a way to make even Wineouse's death about herself, telling the Post: "I'm not even going to say, 'Waste of glorious sublime talent,' which I feel... I'm fucking gutted. I tried with her, I tried twice."

But even Love's histrionics had nothing on the Guardian's really punctilious piece on "the hierarchy of death," which compared the media's coverage of Winehouse's fatality to that of those who died in Oslo bombing.

The wide range of reactions to Winehouse's passing in the media may say more about the human desire to explain and grieve than it does about the singer herself. In the end, the best we can do to honor her memory is reflect on her shining moments, like her poignant, soulful performance of "Me and Mr. Jones" in 2007.