Boehner to Obama: Put up or shut up

The Speaker says he can't cut a deal with the president and will "go it alone." But that's not how our system works 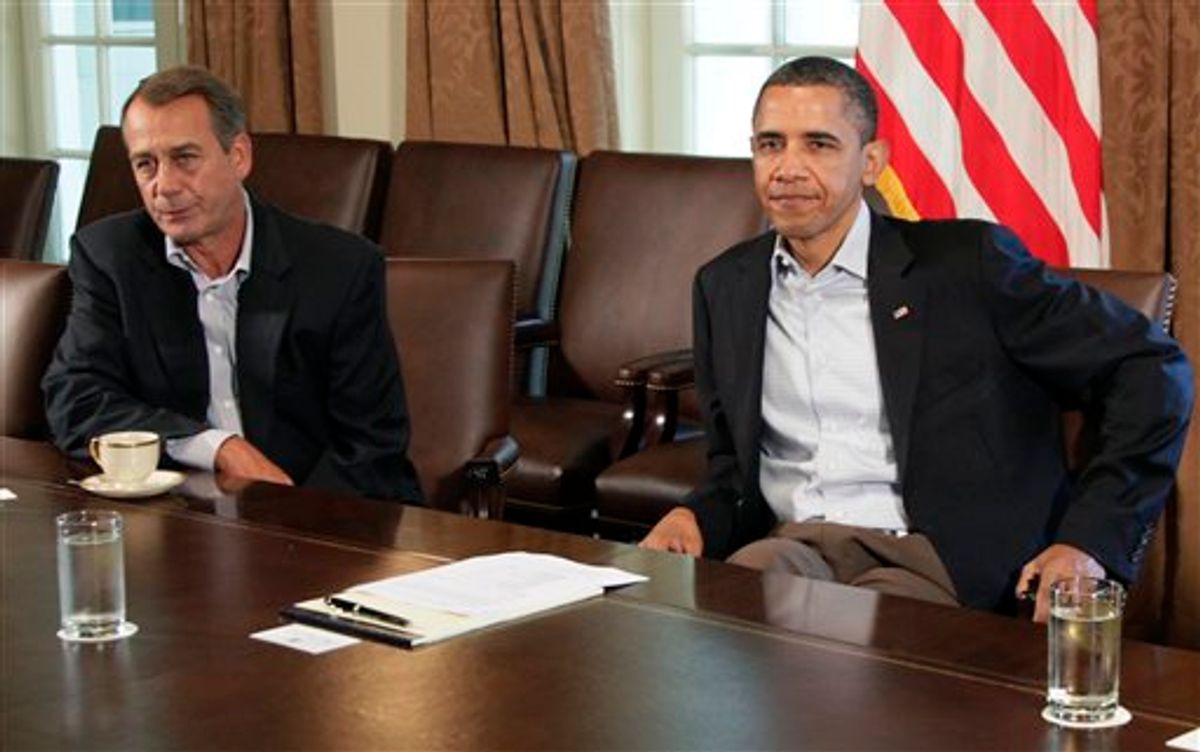 President Barack Obama sits next to House Speaker John Boehner of Ohio, left, in the Cabinet Room of the White House, Saturday, July 23, 2011, in Washington, as they meet to discuss the debt. (AP Photo/Carolyn Kaster) (AP)
--

"The eyes of the world are on us," said Treasury Secretary Timothy Geithner on ABC's "This Week" Sunday morning. But are they watching in fear and horror, or just stunned into speechless amazement at the sight of the world's greatest superpower steering head on towards a debt ceiling iceberg?

All weekend long, legislators and pundits made repeated references to the pressing necessity of cobbling together some semblance of a deal "before the Asian markets open." Whether or not this was true was impossible to say, but here's what we know: as Japan's stock market prepared to open at 8 p.m. Eastern time, nothing remotely close to an agreement existed. If the eyes of the world are on us, then the mouths of the world are gaping in astonishment.

The New York Times reports that Senate Majority leader Harry Reid is putting together a package supposedly worth $2.5 trillion of cuts, but they're sure to be unacceptable to Republicans -- a whopping $1 trillion is simply assumed to come from winding down the wars in Afghanistan and Iraq. That's not the kind of entitlement-slashing that the GOP is salivating for.

Meanwhile, Speaker of the House John Boehner is said to be aiming for a "two-step process" -- a temporary hike in the debt ceiling until the end of 2011 in return for $1 trillion in cuts now, followed by deeper cuts later according to guidelines set down by a deficit reduction commission whose recommendations will somehow have binding power. But details of neither plan were not available by early Sunday night, and according to numerous accounts, wouldn't be presented to legislators until Monday. So much for Asia -- we'll have to see what New York thinks of this strategy in the morning!

But as unedifying and distasteful this whole melodrama is to virtually everyone watching, the stalemate, practically speaking, has also been inevitable. We haven't yet hit crunch time. The markets haven't yet freaked out. And the true clash of wills in Washington is still coming. Boehner and Obama are still fencing. The heavyweight blows are yet to come.

President Obama has repeatedly stated his opposition to any short-term extension of the debt ceiling. Republicans are savaging him for putting "politics" above the welfare of the nation, saying the president simply wants to avoid another debt ceiling fight during an election campaign, but their own strategy is transparently political -- the more often they can bring Washington to a halt by using the debt ceiling as a hostage, the more damage they can do to Obama.

Obama has threatened to veto a short term debt ceiling hike. At the same time, according to Politico, Boehner reportedly told House Republicans during a conference call Sunday afternoon "that a so-called 'grand bargain' is not possible with 'this president.'" So he's prepared to "go it alone" and present his own bill.

But of course, that's ridiculous. The House can't "go it alone." The Senate has to pass any bill the House approves, and the President has to sign it. This crisis won't be resolved until something lands on the president's desk and he makes his final call.

With the August 2nd deadline bearing down and markets getting progressively more nervous it's not hard to imagine Senate Democrats and House Republicans cutting a short term deal that ends up putting Obama on the spot. And it would be a very tough spot indeed, whether or not one thinks he is, to use Paul Krugman's memorable formulation, "President Pushover." Because even if Wall Street would rather see a long-term deal than a short-term deal, and even though the credit rating agencies have made it clear that they think a short term patch won't avoid a credit downgrade, it's hard to think of anything that would be more likely to spur a market panic at this stage of a game than a presidential veto of a Congressional debt ceiling.

The politics are brutal for the White House. Many House Republicans have made it clear that they are willing to send the U.S. to default. On the question of whether the House GOP is willing to push this to the limit their credibility is outstanding. The same is just not true of Obama -- I think it would be hard to find anyone in Washington how actually believes the president would go ahead and veto a deal, while knowing full well that such an action could incite exactly the kind of financial chaos he is trying to avoid.

Maybe a dose of market chaos would finally break the Republican will. But getting to that point will take a display of determination and courage from Obama that we have yet to see. So yes, the eyes of the world are watching. We're all waiting to see whether the president can redefine himself -- can he play hardball? Can he call Boehner's bluff?