As the final season begins, Vince is out of rehab, Turtle's half his size and Ari's still insufferable 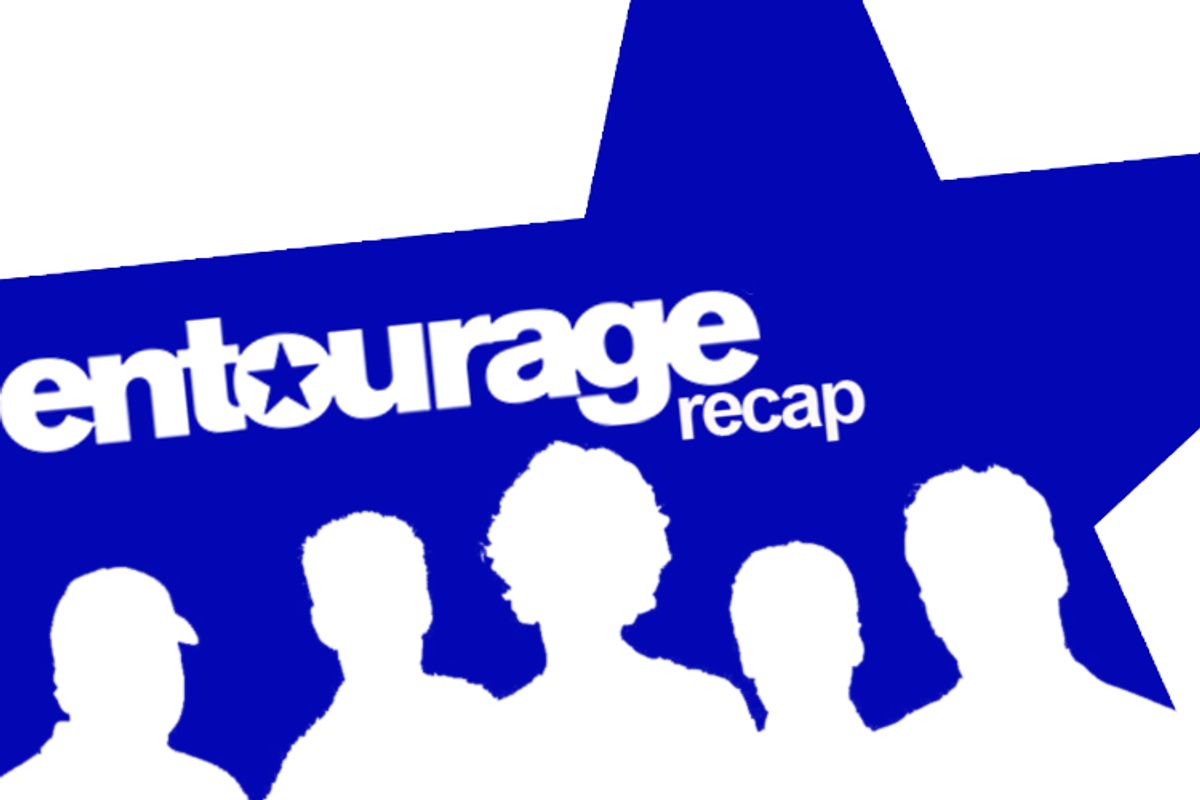 Editor's note: Salon staff writers Matt Zoller Seitz and Drew Grant will be recapping the eighth and final season of "Entourage" as a team. Matt has been watching the HBO series regularly since it debuted; Drew is a newbie. Complications ensue.

Drew: The eighth season of "Entourage" is a good a place to start watching the show as any: Vince just got out of rehab and is totally chill (that's so Vince), Drama and Turtle are bumbling their way through making their pad drug-free for their buddy's homecoming (that's so Drama and Turtle!), Ari is making gay jokes around Lloyd and trying to yell his way back into his wife loving him (that's so Ari!), and E is freaking out because Sloane sent his engagement ring back to him in an envelope and Vince never called him about getting out of rehab (actually, E is sort of edgy these days). And Scott Caan is there, being just so Scott Caan!

When Vince gets out of rehab, a bunch of fans are mobbing the center and holding up "We love you!" signs. In real life, the only people outside your rehab are TMZ reporters. But this is fantasy Vincent Chase land, where, after what I've been told was a brief seasonal hiatus, the stakes are once again lowered to absolutely nothing. Will Vince's surprise sobriety party go as planned? Will the truck full of women delivered to populate said party serve as a sad commentary on the fact that between six guys in Hollywood, none of them know any single ladies who want to hang out with a movie star and not do cocaine? Will the entire house burn down due to a series of hilarious mishaps? (Yes.)

So Matt, first question: What happened to the other half of Turtle?

Matt: Jerry Ferrara, who plays one of the show's main four guys, a pot-smoking neighborhood dude from back East, used to be chunky, but apparently he decided to go svelte for the final season. Details of his weight loss program can be found here.

"Brooklyn-born Ferrara, who recently split from his cast mate and 'Sopranos' star Jamie-Lynn Sigler, is said to have taken up hiking in Runyan Canyon and traded burgers and fries for tofu, fresh organic fruit and vegetables," the piece says. The weight loss isn't a part of any plotline on the show as far as I can tell, unless you treat it as a kind of read-between-the-lines development that's there if viewers choose to notice it, but that otherwise doesn't announce itself. But "Entourage" isn't a read-between-the-lines kind of show, so the weight loss is more likely Ferrara's response to the fact that the show is going off the air, he's a Hollywood actor, and he doesn't want to be typecast as Turtle all his life. Or maybe he just wants to be healthy, who knows?

This is an excellent first question, because it's in tune with the vibe on "Entourage." This is not, to put it mildly, a high-stakes show.

Drew: Why is Vince in rehab?

Matt: Vince is in rehab because after years as a major star in Hollywood, he finally succumbed to the hard-partying lifestyle and became a basket case. Last season he was ingesting massive amounts of cocaine and booze, partly as a response to troubles with his career and his porn-star girlfriend Sasha (played by real life porn star Sasha Grey), partly because he survived an accident during the shooting of an action picture and became addicted to risk, and partly because the show had been almost entirely drama-free during its entire run and the producers wanted to really challenge these characters.

But, of course, it's "Entourage," which became a big HBO hit partly by sparing viewers the hassle of dealing with anything too troubling or deep, so in between seasons, we skipped ahead to Vince post-rehab. This is very consistent with the show's M.O. It does an excellent job of protecting the fantasy it has created by almost never putting audiences in a position where they have to ask if they really believe in a particular plot development. When Vince played Aquaman, we only saw a little teaser or trailer for the movie, not any scenes from the film itself, much less any scenes of Vince acting on the set of that fictional film, which mean we never had to ask whether he was credible in the part, or if the movie was any good. And when the gang threw its collective weight behind a four-hour black-and-white New York drama starring Vince, titled "Queens Boulevard," and it became an against-all-odds smash at Sundance, we were just informed that it did very well; we were never asked to look at piece of the movie and decide if we thought it was good or if it sucked, or if Vince could really act (as we're told he can) or if he''s just a very charming Pretty Boy.

So this new episode starts with him making a little speech to his fellow addicts and hatching a plan for a new movie about a guy with a dog who goes to Romania to help dig out some miners trapped in a cave-in. The one clever thing about this development is the bit where Vince says that being in a top-dollar rehab clinic made him feel an affinity for a bunch of miners trapped underground for a month. That's the kind of subtle dig at pampered Hollywood narcissism that I really enjoy, but that "Entourage" doesn't do enough of. "The Larry Sanders Show" is still the gold standard for that sort of humor. "Entourage" is usually a lot more broad in its satire, always sort of jabbing an elbow in your ribs and going, "Clever, huh? Am I right?"

But I should also admit that in this case, the show's timing is nothing short of eerie. Vince's big idea is based on his having watched TV coverage of the mining cave-in in Chile last year. On Sunday, the very same day that this episode aired, it was announced that the real-life miners had sold their story to Hollywood.

Matt: The breakup seems permanent now, but you never know. They're like the Elizabeth Taylor and Richard Burton of this sitcom -- star-crossed lovers. Admittedly, that description makes their relationship sound more interesting than it is. "Entourage" has never seemed too interested in it, really. It's just there to give Kevin Connolly, who plays E, some dimension, and show that deep down E is probably a more old-fashioned guy than the other three. I always thought Connolly was the best actor on the show, and that E was the most interesting character. I feel like he's the only one of the four who might have done just fine if he'd never had anything to do with the film industry. He's a hustler, and way more mentally together than Drama or Turtle, or even Vince, whose visionary tendencies sometimes get the better of him. I can picture E running a used-car dealership or managing a supermarket or something, and saving his pennies so he and the wife can take their three kids to Disney World.

Drew: Wait, why is Ari out of his house?

Matt: Ari and his wife (Perry Reeves) got separated after seven seasons of Ari inflicting all sorts of Hollywood super-agent stress on her, and now she has a boyfriend. This is the other part of the episode that I liked. Jeremy Piven seems to make it a point of pride to play insufferable characters, and to be insufferable in real life, but he's a good actor, and he does the prideful-man-brought-low thing very well.

Drew: Who all lives with each other now? Do they all live communally under Vince's house until he gets out of his sexy rehab?

Matt: I'm a little unclear on who lives with whom, and I don''t think it really matters that much. "Entourage" is shot on location in a wide array of Southern California locales, and it's R-rated in its humor, but deep down it's a pretty traditional situation, with all the descended-from-the-1950s devices, like having all the action seem to take place in one set even when it's scattered all over the lower half of a major state. People are always dropping by on each other unannounced, or stopping by one another's homes and apartments and offices to say things in person that they'd probably handle via text message in real life.

Drew: When did they add in Scott Caan? Is he the fifth member of their crew? Is he playing himself?

Matt: The answers are 1) a couple of seasons ago, and 2) yes and no. Scott Caan is playing a guy named Scott Lavin, a talent manager, E's associate and sometime rival and sometime friend. Scott's a somewhat compelling character, sort of like Ari without the explosive energy, but with all the shamelessness. There was some tension between him and E last season, a falling out over Scott supplying Vince with drugs.

And 3) no, despite the shared first name, Scott Caan is not playing himself. Maybe they named the character Scott so that Scott Caan would know which lines were his?