Is the ever-faster speed of retro culture hindering the creativity of new generations? 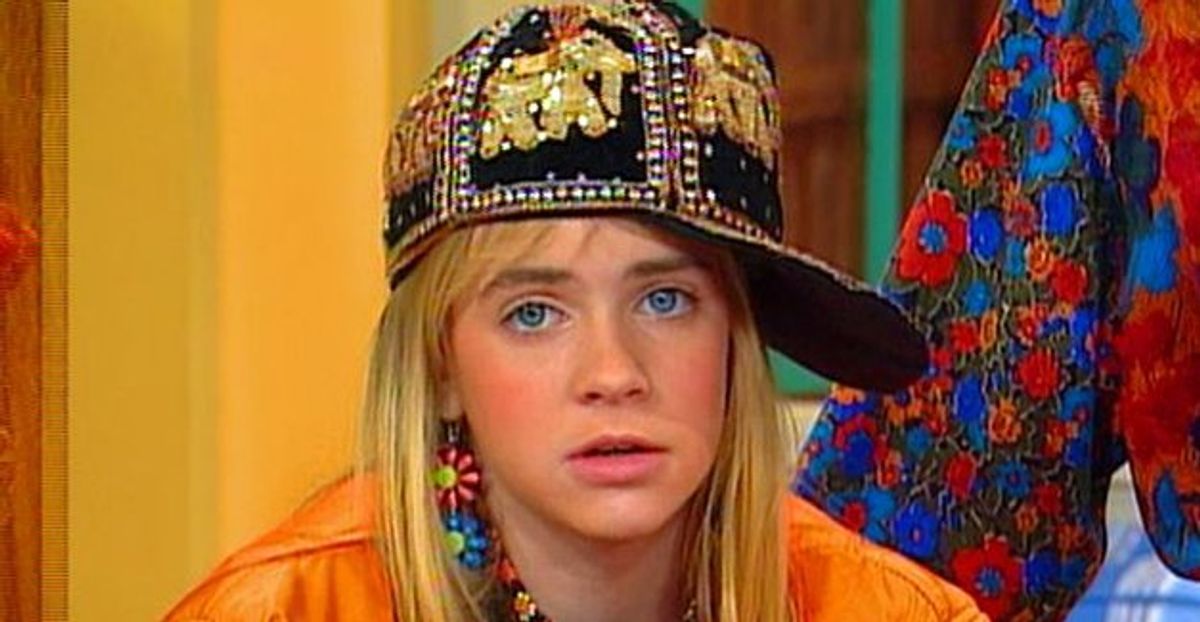 Please God, it's too soon to bring back the fashion of "Clarissa"
--

I hadn't seen my usually laconic, eye-rolling 22-year-old sister as excited this summer as when she told be me that Nickelodeon was bringing back "All That."

"You mean that kid sketch show from when you were like, 8?"

"Yeah," she said, getting a wistful look in her eyes, "and 'Clarissa Explains It All,' too. Man, I loved those shows."

TeenNick is calling its new late-night schedule "The '90s Are All That," but recently, you might just say the '90s are everywhere, in all its many guises. There's Clarissa, sure, but also Nirvana, as September's 20th anniversary of "Nevermind" approaches. Richard Linklater has been taking a 20th anniversary victory lap with "Slacker." And last week at ComicCon, Mike Judge talked about the return of the decade's ultimate slackers, "Beavis and Butt-Head," to MTV.

Those who find nostalgia harmless fun might need reminding that the word itself comes from a Greek compound of nóstos (to come home again) and álgos, which translates to an ache; it's the linguistic daughter of sorrow and longing personified. I'm four years older than my sister, and don't feel any aching pain to go back to those of years of middle school when I would stay up late Saturday night and watch SNICK.

Yet the same week, I found myself wishing that if they were going to bring back Clinton-era TV shows, why couldn't it be "My So-Called Life," "Daria" or " Mystery Science Theater 3000" -- all of which ended before I made it to high school.

Of course, every decade takes its turn on the nostalgia wheel eventually, and usually more than once. But nostalgia was usually targeted to an older demographic -- after all, the audience for elaborate reissues of "Nevermind" and "Slacker" are different from those who pine for "All That."

But if nostalgia used to be a bittersweet memory of a long time ago, now it's the commercialization and repackaging of the last 10 years of your life. Thanks to us children of the '80s, nostalgia can now be branded, bottled and sold to you less than a decade after you experience it, creating a feedback loop of fond -- if somewhat false -- feelings of attachment. As a culture, we've shrunk the time between the experiencing of a culture and its inevitable comeback from a generation to a decade to a couple of years ... and why stop there? Call it faux-stalgia.

Why do I blame the '80s for cranking up this process to lightning speed? I spoke to Susannah Gora, author of "You Couldn't Ignore Me If You Tried: The Brat Pack, John Hughes and Their Impact on a Generation," who sees the nostalgia factor not in how much time has passed, but how an era was defined: "There is a big difference between the culture of the 1980s and the '90s. Teen movies from the '80s really affected how Generation X saw the world: Everything from love and sex and friendship to politics, sex, and fashion ... you name it. And I think the lesson of '80s pop culture was optimism. You had John Hughes, the idea that the geek could get the girl ... music with power ballads that made you think you could take on the world. You really can't underestimate that kind of power.

"The moment Nirvana came on the scene, everything fun and over-the-top became passé. A lot of '90s culture had to do with grunge, irony and a darker worldview, although ironically, looking back we actually had it pretty good. So it's interesting that there are movies now like 'Take Me Home Tonight' and 'Hot Tub Time Machine,' that celebrate the '80s. We have music that emulates that era, like Neon Trees, the Killers, Lady Gaga as Madonna. People would rather revisit the 80s than the '90s. Like the 1950s, it was a very fun, upbeat time in culture."

It does seem like '80s mania affected kids born during that time period as much as the adults who lived through it. When Hot Topic started selling "vintage" T-shirts of films like "E.T." and "The Goonies," I remembered wondering why anybody my age would proudly display their love for a kids movie. Same with "Take Me Home Tonight." How much of Topher Grace's teen audience actually remembers when "Risky Business" or "Sixteen Candles" came out? (The movie's official music video asked its audience to "spot" all the iconic '80s movie scenes being re-created by the cast while Atomic Tom covered Human League's "Don't You Want Me.")

The one thing the children of the '90s nostalgia wave do have going for them? The Internet. And everyone I talked to agreed that the Web is the No. 1 factor in the closing of the nostalgia gap. Whereas older generations could only reminisce about the artifacts of when they were young, sites like YouTube upload shows immediately after they are canceled. Retrojunk.com lovingly archives all the ephemera from the '80s and '90s and gives readers open forums to discuss how much they loved Tommy the Gold/White Power Ranger more than Zach Morris.

Add the Internet to Gora's theory, and faux-stalgia becomes a product of growing up in the "ironic" '90s, when advertisers, retailers and even artists were busy selling children on the idea of retro-mediacy. Is there even harm in it? After all, what does it matter if we remember "Risky Business" when it came out in theaters, or just by watching its famous scenes parodied in advertisements? Even if "Gremlins" came out in 1984, it's the 19-year-olds today who will be able to beat you in the trivia question for the name of Gizmo's original owner (Mr. Wing, though you only find that out in the sequel).

Why spoil the fun: Isn't that like telling people under 25 that they can't be obsessed with old movies or Led Zeppelin? As it turns out, there's a good reason why nostalgia is usually reserved for adults.

Joseph LeDoux is a professor of neuroscience and psychology at New York University, with a focus on the biology of memories and emotion. When asked via email why nostalgia culture prevails through every generation, he replied: "We know that adolescence is a time of hormonal exuberance and that hormones play a key role in strengthening memory (we remember emotional situations strongly in part because of the hormonal upheaval). Adolescence is just a continuous emotional outburst so we remember it strongly. There's something called the reminiscence bump, where it's been shown that memories from teen years and early 20s account for disproportionate amounts of one's memories."

Talking about music, Daniel J. Levitin comes to a similar conclusion: "Fourteen is a sort of magic age for the development of musical tastes ... Pubertal growth hormones make everything we're experiencing, including music, seem very important. We're just reaching a point in our cognitive development when we're developing our own tastes. And musical tastes become a badge of identity."

If we extend Levitin's point to include not just music, but all influential media -- TV, movies, fashion -- we begin to see why marketing nostalgia to people in their formative years might be a problem. If we are closing the age gap between how long it takes us to start looking backward, then these 14-year-olds are going to be glorifying pre-adolescence, instead of being influenced, and eventually influencing, the culture that they are growing up in.

Not convinced? Let's go back to that push for TeenNick's new-old lineup, "The 90s Are All That," which will be replaying "classic" shows like "Clarissa Explains It All," "Kenan & Kel" and the cartoon show "Doug." By Nick's own demographic of their audience -- kids 7 through 17 -- no one who fit into its original target audience remains young enough to still be enticed to watch TeenNick. And yet Viacom says it is just responding to the overwhelming surge of popularity in these shows' Facebook groups.

Brian Stelter of the Times writes:

Research has convinced Nickelodeon executives that the Web -- a repository of cherished childhood memories -- 'is allowing young people to be nostalgic, probably sooner than other generations,' said Cyma Zarghami, the channel's president.

But maybe allowing kids to be nostalgic isn't what they need. Viacom's strategy of bringing back "classic" shows on its music channels MTV and VH1 makes a little more sense, since they were always marketed to older teenagers and 20-somethings. In 2005 the median age of an MTV viewer was 21.6 years, though originally MTV was created to appeal to the 12-18 demographic. So while MTV started to grow up with people, Nickelodeon dropped you off as soon as you graduated. Until now, when there's money to be made off of young 20-somethings talking about "Are You Afraid of the Dark" the way that people in their 40s talk about "Charlie's Angels."

But while bringing back "Pop-Up Video" and "Beavis and Butt-Head" (the former of which stopped airing new episodes in 2002, the latter in 1997) may trigger some of those nascent adolescent feelings in adults, there's another issue that keeps these shows from being truly nostalgic: They simply haven't given us enough time to miss them. VH11 aired "I Love the '90s" in 2004, when the era being described longingly wasn't even half a decade gone. "The '90s Are All That" has a little more of a gap, but not much. So what is the message that we're sending these hormonal, emotional and impressionable young adults, who are supposed to be out there creating the memories to last a lifetime?

Why, that the best years are already behind them.