Why is Wall Street so calm?

Despite the best efforts of reckless legislators, markets are not panicking. Don't they understand doom is upon us? 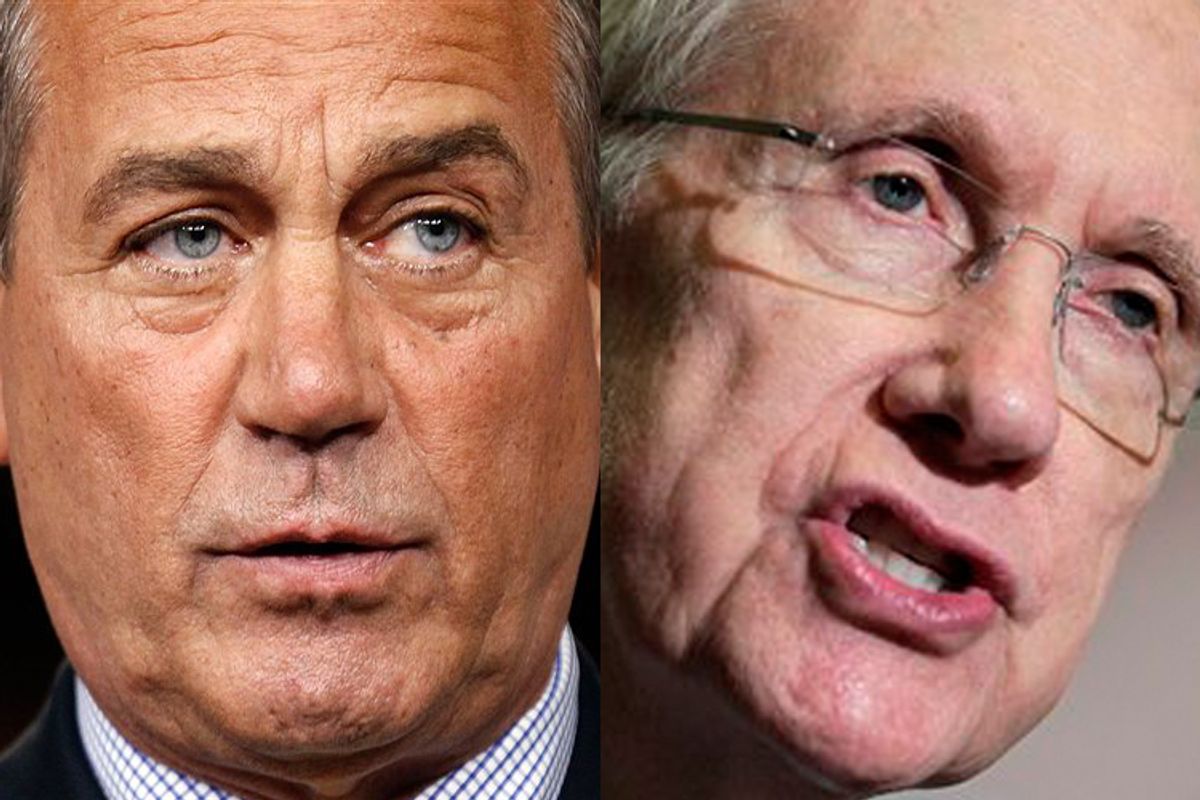 The Wall Street Journal is now featuring a debt ceiling countdown timer on its website -- as I write these words, 8 days, 15 hours, 49 minutes and 42 seconds remain before... well, we don't really know what's going to happen when the clock runs out, but there are certainly plenty of unappetizing scenarios.

But Wall Street itself has yet to panic. Oh sure, the goldbugs are bidding gold up again, but that's hardly news. More to the point, as of noon ET, the Dow Jones Industrial Average had only fallen 54 points, and the bond vigilantes were still in hiding -- bizarrely, it seems that Treasuries are still considered a safe haven in troubled times, even if one of the prime factors contributing to the troubles is the question of whether the U.S. government will stand behind its Treasuries.

So today, at least so far, does not appear to be the day that pressure from financial markets will finally goose grandstanding, hypocritical and criminally reckless legislators into cutting a deal. Our holding pattern continues: Later on Monday, Senate Majority leader Harry Reid is expected to release details of his $2.7 trillion, no-new-revenues proposal. Meanwhile, Boehner's let's-keep-the-chaos-and-uncertainty-going-as-long-as-we-can plan to seek a short-term debt ceiling hike won't be revealed in all its glory until tonight, or more likely, tomorrow.

Should markets be panicking? A good case can obviously be made for nervousness. Ratings agencies stand ready to downgrade U.S. credit, a development that would have enormous implications for the bond market. The last thing the U.S. economy needs right now is a major disruption in ongoing government spending. And while Reid's suggestion, on the surface, could attract majorities of both parties, his plan will spare entitlements and is likely to include plenty of dubious accounting that the House Republican hardcore will surely reject. And as for Boehner, if the markets don't like uncertainty now, they are hardly going to be exhilarated by a plan that all but guarantees another budget showdown in 2012, with the added fun of a presidential campaign to complicate matters.

But there's also a paradox here, ably pointed out by Ryan Avent at the Economist:

There's a fascinating dynamic at work, to be sure. People are practically hoping that markets begin to panic, as that's likely to spur Congress to action. But if a market drop will generate action, then it's not clear that markets will drop in the first place. Any fall in equities makes action more likely, which should support equities.

To spell that out even more bluntly: Everyone thinks that the inevitable panic will result in a deal, but if there's going to be a deal, there's no need to panic.

Memories of the government shutdown dance from last fall are also probably influencing the market mind-set. In that sequence Boehner also broke off talks several times before cutting a deal at the last second. And if everyone is expecting a last-second deal, that's yet another reason not to be running around screaming about imminently falling skies.

But this paradoxical equilibrium can only last for  so long. It will take a few days for the competing plans to take final form and get voted on. If the House rejects Reid's plan and the Senate rejects Boehner's plan we'll be that much closer to the deadline and still have no deal. Today, the market yawns. Tomorrow?