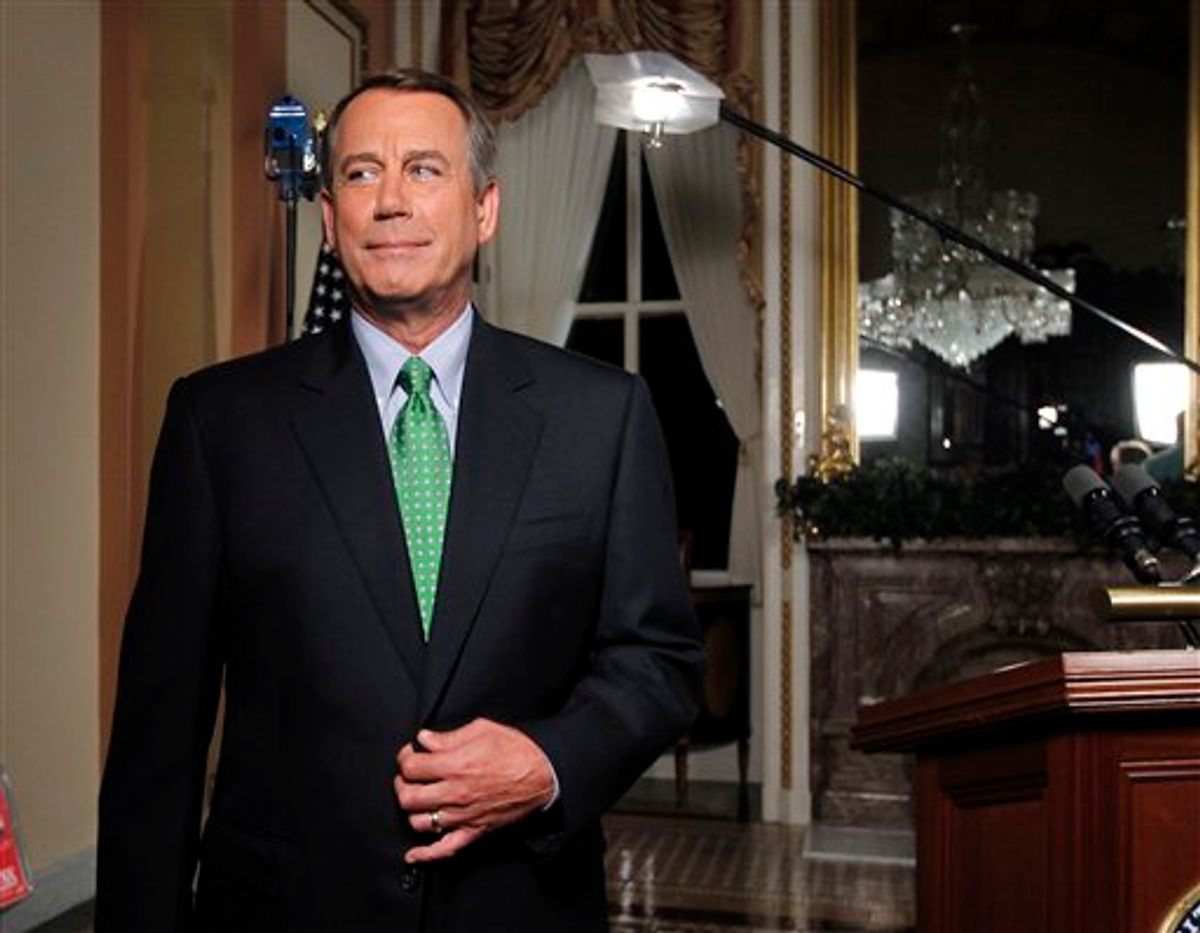 Speaker of the House John Boehner is seen after delivering his response to President Obama's remarks about averting default and dealing with the federal deficit, at the Capitol in Washington, Monday, July 25, 2011. (AP Photo/J. Scott Applewhite) (AP)
--

Robert Greenstein at the Center on Budget and Policy Priorities has been doing some invaluable budget number-crunching throughout the ongoing debt ceiling crisis. On Monday he released a "statement" on the new Boehner plan that includes by far the strongest rhetoric I've seen from him to date.

The plan is, thus, tantamount to a form of "class warfare." If enacted, it could well produce the greatest increase in poverty and hardship produced by any law in modern U.S. history.

I will take a closer look at how both the Reid and Boehner plans will impact ordinary Americans tomorrow morning. But for now, with Greenstein's denunciation ringing in your ears, consider this: A significant number of House Republicans oppose the Boehner plan because it does not go far enough.

But those hopes were dampened Monday by conservative opposition to the plan, highlighted by Rep. Jim Jordan (Ohio), who leads a conservative caucus of more than 170 GOP members. Jordan is one of 39 House Republicans who previously took a pledge vowing to increase the debt ceiling only in return for Congress sending to the states a constitutional amendment requiring a balanced budget.

The "Cut, Cap, and Balance Coalition" -- another conservative group of House Republicans -- also grumbled, in a statement released Monday, "expressing why the Speaker's proposal does not meet the principles articulated in the Cut, Cap and Balance pledge":

"As we stated this morning, Cut, Cap and Balance is not merely a legislative framework, it is a series of principles. Principles are not subject to negotiation. Unfortunately, the Speaker's plan falls short of meeting these principles. Perhaps most troubling is the proposed Congressional Commission. History has shown that such commissions, while well-intentioned, make it easier to raise taxes than to institute enduring budget reforms. Additionally, a symbolic vote on a balanced budget amendment at some later time minimizes its importance, as it will not be tied to an increase in the debt ceiling. A BBA that allows a tax increase with anything less than a 2/3 supermajority is not a serious measure."

Finally, The Hill reports that other House Republicans are upset that there aren't sharp enough cuts to discretionary spending implemented immediately:

Speaker John Boehner's (R-Ohio) debt-ceiling proposal would cut only $6 billion in discretionary spending for 2012, a figure that could cost him the support of conservatives who want larger reductions....

... On Monday night, freshman conservative stalwart Rep. Mick Mulvaney (R-S.C.) told The Hill that the amount of cuts for 2012 would be key to determining whether he can support the plan.

"I didn't get a warm fuzzy feeling about it," he said of the proposal as it was described to him by Boehner on Monday.

Is it really conceivable that conservatives would rebel against the Boehner plan because it's too weak? It's hard to imagine, but underestimating Tea Party conservativism is a fool's venture. And Boehner definitely needs to keep his caucus together. One imagines he won't be attracting more than a handful of Democratic votes for "the greatest increase in poverty and hardship produced by any law in modern U.S. history."