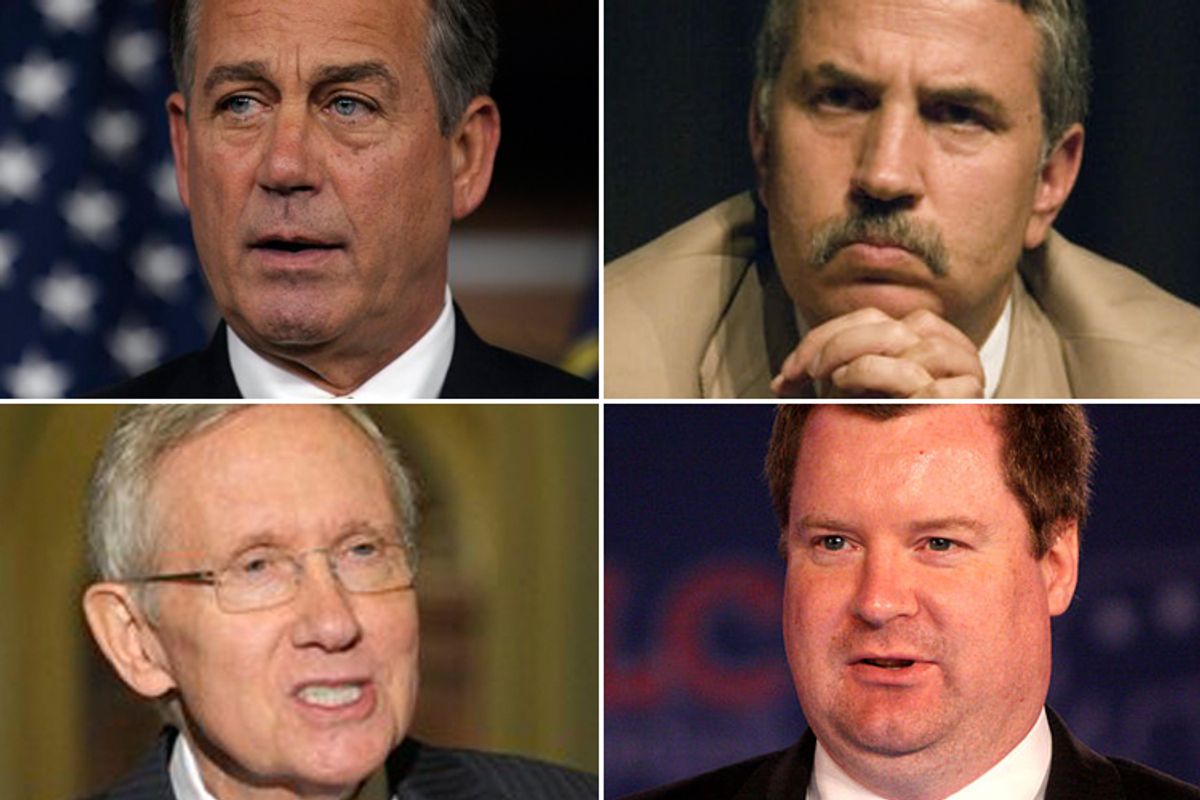 A lot of people were alarmed Monday -- with good reason -- to learn that the House Republicans were relying on radio entertainer Rush Limbaugh and vile blogger Erick Erickson to tell them what to do about this whole debt ceiling thing. As everyone in Washington went into separate rooms to write their own horrible debt ceiling plans (my one-step approach: NO new revenue, ten zillion dollars in cuts to non-defense spending, Social Security replaced by personalized/market-based packs of roving hyenas), Erickson reported that he's been taking "call after call" from unnamed "members of the United States Congress," all of whom were seeking his approval, because this dumb, disingenuous hack is who the Republican Party is actually accountable to.

Meanwhile, John Boehner, the speaker of the House, gave his five-step "two-step" plan to famous shouty radio guy Rush Limbaugh, before he showed it to his own conference. (Of course, his conference is full of morons and extremists, many of whom wouldn't have known what to think about Boehner's plan until Uncle Rush explained it, so this was more shrewd than disrespectful.)

This is, obviously, a Bad Sign For America. Erick Erickson and Rush Limbaugh are, at best, entertainers -- they're certainly not policy experts -- and at worst (and they are very often at their worst) they are extreme demagogues, stirring up shit for fun and attention, always more interested in tribal victory against their enemies on "the Left" than they are in governing, or doing anything at all to improve America beyond constantly crowing about how much better it used to be.

People like Erick and Rush were supposed to exist to keep the rubes occupied while the grown-ups sat down with various monied interests to design policy around what was best for oil companies and defense contractors. They are not supposed to be where the GOP base and congressional leadership get their political information and strategy.

But! But but but. Do you know what actually made me get a bit sputtery with rage yesterday? It was not this "Republicans cannot figure out how to tie their shoes without an asinine TV pundit and Clinton talk radio relic telling them it's OK" business. I expect as much from the modern GOP. It was this Tweet, from Dave Weigel, that set my teeth on edge:

Ominous elevator chatter in Capitol today: "Did you read what Friedman wrote about whether we need a third party?"

Because yes, of course, Thomas Friedman is who the "sensible" ones are listening to.

Thomas Friedman, riding in, with Michael Bloomberg in tow, from Aspen, on the winged stallion of radical centrism, inventing a plan to fix ALL OUR PROBLEMS by misidentifying them and making the actual problems worse. Thomas Friedman's Sunday column was dumber, somehow, than the last 1,500 identical columns he's written on the same subject. Faced with a legislative system with too many veto points and a polarized national electorate regularly splitting their votes between the right-wing party and the incoherent party of "everyone else," Friedman suggests that we elect a third-party president via Web poll. Yes!!! THAT WILL SOLVE EVERYTHING. Someone with no power base in either party, selected by Reddit users. Can't you just imagine how President Maru the Box Cat would be able to cut through this "partisanship" and get things done with "leadership" from the "radical center"? This Web poll third party will be the Amazon.com of politics, in that it will kill the Borders of politics. (I think the Borders of politics, in this example, is the labor movement. Sorry!)

I honestly do not know which one is worse. Friedman, probably, because at least Rush Limbaugh understands how to work to get his intended policy result enacted. His taxes have certainly gone down, as he's gotten richer, since he started his talk radio racket. Friedman seems to think the problem with his "moderate politics of a center-left rich guy" platform is that there isn't a party for it. Mr. Friedman, meet President Obama, of the Democratic Party! I know you hate partisanship, but that is the method by which President Obama is trying to create your flat global technocratic playground dream world!