The difference between understanding Obama's strategy and celebrating it 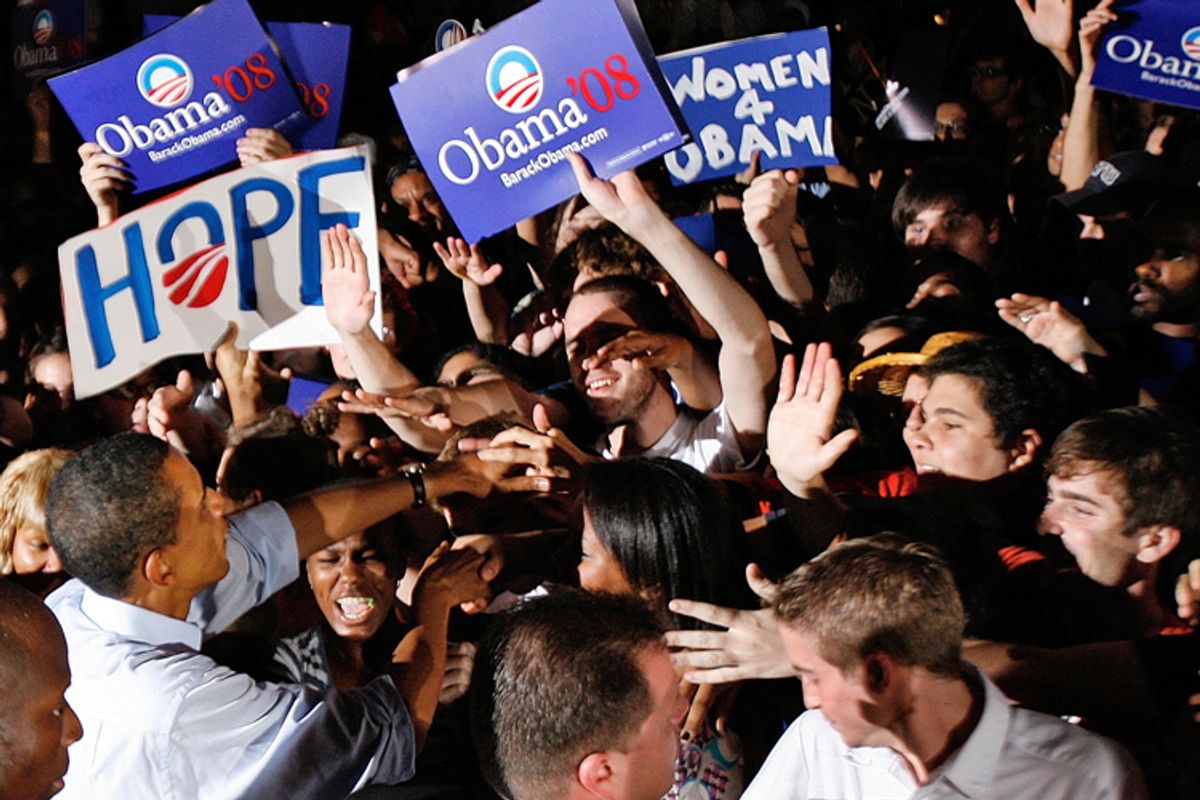 The estimable Glenn Greenwald has taken issue with a piece that I wrote about President Obama and the left, which appeared Monday on Salon.

In part, he contested my interpretation of the evidence about progressive rank-and-file support for Obama, seizing on two new data points that appeared between the time I sent my column to Salon and the time Glenn seems to have read it.

One is a new weekly Gallup tracking poll showing Obama's approval ratings among self-identified liberals dropping from 75 percent to 70 percent, which Glenn calls "the lowest it has been in many months." Actually, it's the lowest it's been in three months, but still higher than it was for a two-week stretch last December. It's been bouncing around the 70s for the last year.

The other new data point is a weird triple-loaded extrapolation that two Washington Post business writers made from a Post/ABC poll suggesting the percentage of self-identified liberals expressing strong support for the president's record on jobs has been dropping since some undefined point last year. Without further context, this is completely non-illuminating; it would be shocking if there wasn't erosion among every conceivable category of voters in "strong" support for Obama's "record" on jobs during a period when unemployment remained above 9 percent. Since liberals were the most likely to have ever expressed such strong support, that's where the erosion would be most notable.

Glenn also goes back to November of 2010 to cherry-pick a McClatchey poll showing reasonably high levels of support among Democrats for a primary challenge to Obama. Perhaps it's more relevant that the recent CNN poll he otherwise cites as demonstrating a plunge in liberal support for Obama also shows the president's "re-nominate" number among Democrat as 77 percent, which is probably as good as it gets in the kind of economic environment the country is experiencing.

In any event, the data is ambivalent enough that reasonable people can disagree. But it's not the sort of clear trend that only someone exhibiting "willful blindness" could harbor some doubts about, as Glenn says in an unfortunate burst of ad hominem argument.

And that brings me to the overall tone of Glenn's riposte. Nobody has written more words of frustration about stubborn progressive loyalty to Barack Obama than Glenn Greenwald. But when someone else points out that the rapid (and entirely understandable) deterioration of support for Obama among progressive opinion-leaders hasn't exactly spread like wildfire to the actual liberal Democratic voter "base," it makes him (and a lot of folk in the comment thread) angry. For the record, I am describing, not advocating, the apparent White House political strategy as it relates to the left, and happen to share a good bit of the progressive frustration with Obama's policies and politics.

The main point of my piece, other than contesting the idea that it's clear actual progressive voters are abandoning Obama in droves, is that Team Obama, for better or worse, has chosen a reelection strategy that is guaranteed to upset progressive writers and activists in the short term and take their support for granted when the deal goes down in 2012. The short-term strategy involves constantly displaying the president's reasonableness as compared to Republicans for the edification of swing voters, even if it looks like weakness, fecklessness, or even treachery to liberals. It will be followed by a general election stretch-drive message of comparative attacks on Republicans as irresponsible extremists, using the impressions built up in 2009-2011 as cannon fodder for the attacks.

As I said in the original piece, this is a risky strategy that has been tried before and sometimes fails. It's entirely legitimate to argue that the price paid in terms of concessions made to conservative demands is far too high to justify it, even it if does work. But assuming the White House goes down the path it has been plotting, it's obvious that when Obama's campaign pivots to a sharp comparative message against the GOP at some point next year, it will be most effective, if it is effective at all, with precisely the rank-and-file progressive voters whose support it has been endangering (if not much actually suffering) for much of the last two years.

If I'm even half-right in this hypothesis, it certainly explains why the White House is turning a deaf ear to the complaints of liberal opinion-leaders these days: Their antipathy is fine grist for the triangulation swing voters supposedly crave, and they'll come around in 2012 when push comes to shove, particularly if a Bachmann or Perry administration is the alternative.

Glenn is obviously right that this sort of strategy has political costs other than the risk of actually losing progressive votes. Enthusiasm matters in terms of money and organization, and in very close elections, losing any votes at all could be fatal. I don't share his certainty that an "enthusiasm gap" was the entire story of the 2010 elections. Even in terms of turnout patterns, there were other important factors aside from "base enthusiasm," particularly the turnout disparities based on age and ethnicity between midterm and presidential election that always prevail, but that have just recently aligned almost perfectly with partisan preferences.

In the end, it seems the White House has chosen to take those risks, and perhaps hopes that money and enthusiasm return along with progressive votes when the fateful choice has to be made in November 2012. I do not advocate or celebrate this strategy, which creates excruciating dilemmas for many progressives, and beyond that, is hardly guaranteed to work. But assessing it on its merits and not simply questioning the motives of anyone who dares even describe it would probably be a good idea.