What happens when our personification of skin-deep beauty develops a skin disease? 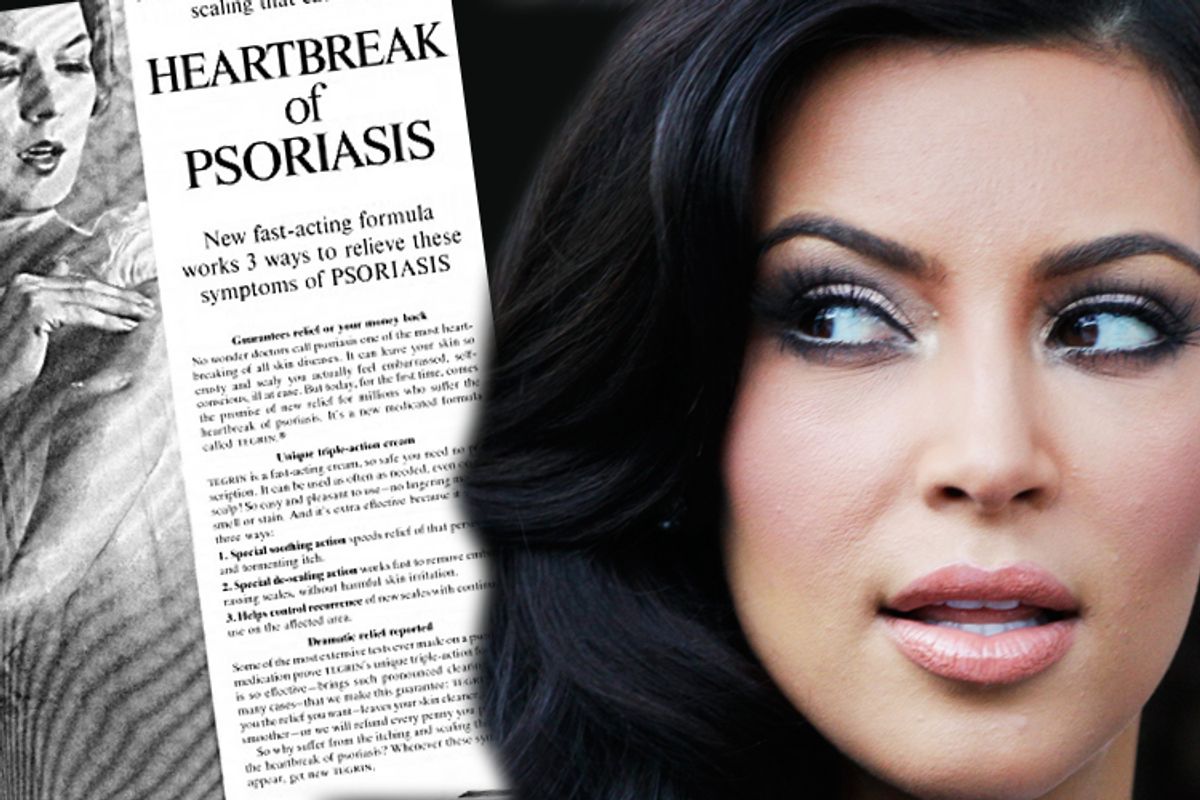 Kim Kardashian suffers from the heartbreak of psoriasis.
--

Guys, I am worried about Kim Kardashian's psoriasis. No, let me rephrase that: I am worried about what Kim Kardashian's psoriasis means for America. Last night on "Keeping Up With the Kardashians," Kim had a meltdown after discovering that the red rash on her legs had spread to the rest of her body. After confirming that it was indeed the incurable skin condition, passed down to her from mother Kris Jenner, Kim is understandably freaked out. "My career is doing ad campaigns and swimsuit photo shoots," the newly engaged socialite cried. "People don't understand the pressure on me to look perfect."

Yes, this is the part where most of us would be inclined to slap her upside that perfect, non-surgically enhanced face. The chronic skin condition with its scaly, red, flaky lesions afflicts millions of Americans and approximately 2-4 percent of the world's population. Like cold sores, you can't get rid of psoriasis (which is also an immune disease), but it can be controlled with topical medicine and treatment. It's hard to sympathize with Kim as she wails against the gods for cursing her with this affliction that so many people deal with on a daily basis. Especially since the era of Photoshop and airbrushing guarantees that no amount of blotchy skin will keep Kim from selling Skechers.

Because Kim Kardashian's name is synonymous with superficiality, there is little to discuss of her that isn't body-related. Her only legitimate claim to fame is that she, along with J.Lo and Beyoncé, heralded a new millennial body ideal: one that celebrated curvy hips, big thighs, bigger asses, and gigantic boobs. (Skinny waists, though, are still very much in.) As Tina Fey writes in "Bossy Pants":

"Now every girl is expected to have Caucasian blue eyes, full Spanish lips, a classic button nose, hairless Asian skin with a California tan, a Jamaican dance-hall ass, long Swedish legs, small Japanese feet, the abs of a lesbian gym owner, the hips of a nine-year-old boy, the arms of Michelle Obama and doll tits. The person closest to actually achieving this look is Kim Kardashian, who, as we know, was made by Russian scientists to sabotage our athletes."

The problem is that now our definition of "perfect" has revealed itself to be as flawed and human as the rest of us. It's like finding out that Superman can get acne. If her body can betray her, then what does that mean for the rest of us? We may take some schadenfreude-like glee in Kim's freakout, but by choosing to document the crisis on her show instead of hiding the condition (as many actors and models must), she may have inadvertently caused a most superficial existential crisis for our beauty-obsessed culture. If Kim Kardashian no longer has the perfect body, how long until she starts getting wrinkles, or gray hairs? Or announces that she has diabetes, which she's now at a greater risk of developing? Once you go down that road, thoughts of mortality and death, both hers and our own, are not very far off.

Well, hey, they don't call it "the heartbreak of psoriasis" for nothing. In fact, that phrase comes from an old Tegrins commercial from 1963, which coined the term in order to sell medicinal salve. Which makes me wonder how long it is until Kim starts shilling for Humira or another psoriasis-treating medication, the way that Justin Bieber and Katy Perry use their acne stories to sell Proactiv. After all, she did let camera crews film her experience finding out about the disease. Some people might call that brave; others may say it's just business-savvy. And of course, there will be that very vocal contingent who will still be aggravated that Kardashian and her skin are topics of interest to anyone. What do you think?