Faced with John Boehner's lies about the debt-ceiling process, the president stakes his presidency on compromise 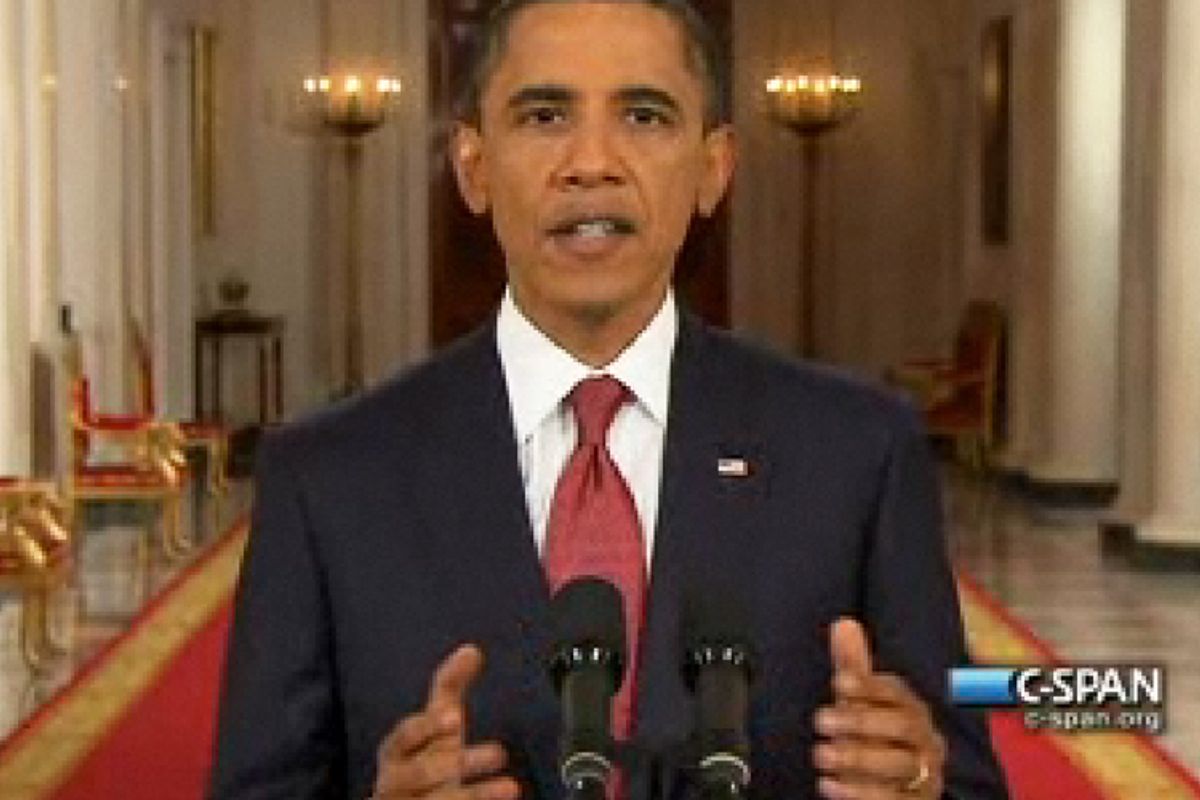 I intended to write about President Obama's prime-time address on the debt ceiling, but House Speaker John Boehner's performance turned out to be the big news. Last seen Friday evening complaining that the president added new last-minute conditions in their debt-ceiling negotiations, Boehner now seems to have no memory of those negotiations, which by both parties' account left them about $400 billion apart. That's not chump change, but against the backdrop of an attempted $4 trillion deal, it didn't have to be a deal-breaker either.

But if you listened to Boehner Monday night, you'd think he and Obama never discussed a deal. In fact you'd believe the president never wanted any kind of deficit-reduction deal at all. In an impressive display of mendacity, Boehner told the American people the president wants "a blank check" to keep on spending, and the House GOP is serving "the American people" by resisting. Instead of talking about how he and Obama might close the gap they faced only three days ago, Boehner went full-tilt Tea Party crazy and presented his own plan, which requires not only brutal spending cuts but a balanced budget amendment -- as well as another congressional vote to hike the debt ceiling again at the height of the 2012 election season.

Can there be any doubt that the Republicans' only interest here is making Obama fail? Let's review all the ways they moved the goalposts since the 2010 elections gave them new power. In December Boehner told the New Yorker that raising the debt ceiling would be the new House majority’s "first really big adult moment," adding, "We’ll have to find a way to help educate members and help people understand the serious problem that would exist if we didn’t do it." For his part Obama said he expected a clean up or down vote, just like President Reagan got 18 times and George W. Bush got another seven times. But after Boehner negotiated his program-cuts-for-continuing-government deal, in April he began to make threats. "The president says I want you to send me a clean bill. Well guess what, Mr. President: Not a chance you’re going to get a clean bill," he told a GOP fundraiser. "There will not be an increase in the debt limit without something really, really big attached to it."

Obama decided to negotiate, but he demanded a dollar of tax or revenue hikes for every dollar of spending cuts. Republicans not only rejected revenue hikes, they demanded a dollar of spending cuts for every dollar the debt ceiling was raised. Obama began seeking a "grand bargain," in which he'd discuss Social Security and Medicare cuts (even though Social Security has nothing to do with the deficit) in exchange for at least revenue hikes. The earliest leaks about such a deal, believe them or not, all contained spending cuts three to five times bigger than revenue hikes. Then what happened? Boehner walked away from negotiations to close those deals -- which would have infuriated many progressives, by the way, including me. And a few weeks ago, as the president got ever more conciliating, Republicans got more stubborn, now demanding a balanced budget amendment in whatever deal is reached.

I honestly don't think anyone has come out and said how extraordinarily apocalyptic and insane it is to tie that controversial old GOP issue to the debt ceiling hike, given the disaster for the American economy if we default. The balanced budget amendment lost favor under the deficit-building Ronald Reagan, when many Republicans decided deficits weren't really an issue -- unless a Democrat held the White House. Tonight Boehner was on prime-time national television telling Americans that's what it will take to increase the debt ceiling. Now, Boehner knows a balanced budget amendment bill can't pass. Hell, he probably doesn't even want it. But this is the way the GOP ups the ante every time the president gets close to a deal.

And what did the president do? He tried to explain how we got into this mess, and he prepared us for a gut-wrenching, economy-wounding compromise. I liked a lot of Obama's speech tonight, but he made a couple of points that typify the way he ultimately negotiates against himself. He opened with that sad and useless comparison between the federal budget and household budgets. Paul Krugman and Robert Reich, among others, have explained why it's wrong until they're blue in the face -- unlike each of our little families, the federal government correctly goes into deficit spending to spur recovery from recession; in fact, the government does it because our families can't or shouldn't. Obama still found the folksy comparison irresistible. "Every family knows a little credit card debt is manageable," the president said, while arguing that anything more than "a little" hurts the economy.

His rhetorical climax also left me a little cold. Talking about Americans' many frustrations with the status quo, Obama concluded: "But do you know what people are fed up with most of all? They’re fed up with a town where compromise has become a dirty word." Does he really think that? Obama continued:

They work all day long, many of them scraping by, just to put food on the table. And when these Americans come home at night, bone-tired, and turn on the news, all they see is the same partisan three-ring circus here in Washington. They see leaders who can’t seem to come together and do what it takes to make life just a little bit better for ordinary Americans. They are offended by that. And they should be.

You know, I'm sure that's true for some people who are "scraping by." But I think it's mainly true for the Beltway elites the president hears from way too much. That's the complaint of David Brooks and Tom Friedman, and the hedge-funders backing the frivolous "third party" time-waster, Americans Elect. It's not what the unemployed and the struggling and people afraid they'll lose Social Security or Medicare benefits are "fed up with most of all." Obama can't really think that, can he?

In this political environment, anything is possible. Prepare to hear that Harry Reid's deal to cut $2.7 trillion from the budget, with absolutely no revenue increases, is a victory for Democrats. It won't be. I hope I'm wrong, but the president is dealing with a conscience-free opposition willing to risk economic tragedy to defeat him. I'd love to see all of his maneuvering result in a clean up or down vote on a debt increase (which some of his most avid supporters insist is his goal). I don't see it from here. Again, I would be thrilled to be wrong.