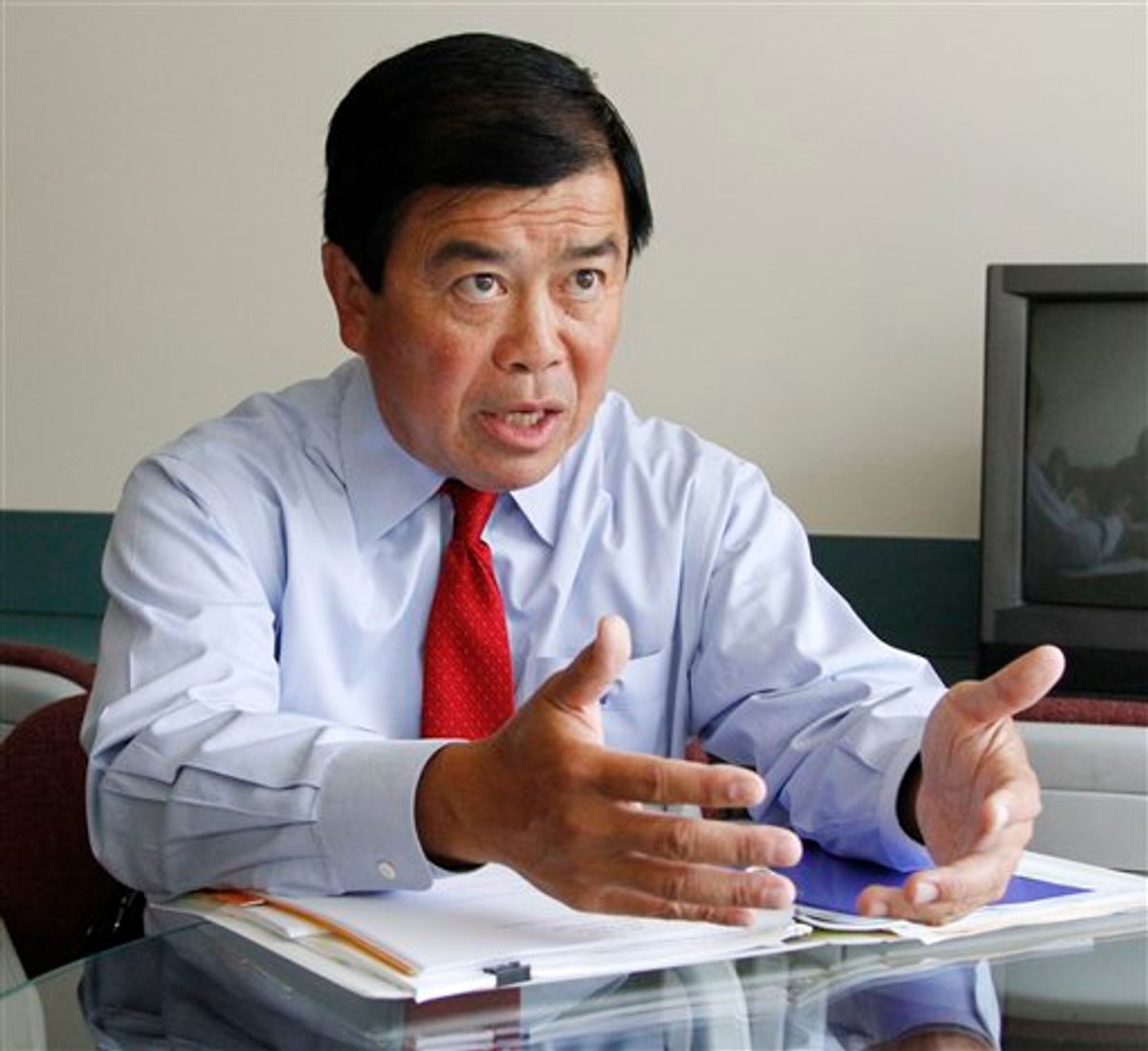 FILE - In this Aug. 17, 2010 file photo, Congressman David Wu, D-Ore., speaks during an interview in Portland, Ore. Wu is calling a published report about an alleged unwanted sexual encounter with a young woman "very serious" but has not yet said whether the accusation is true. The Oregonian reports that a young woman from California has accused the Democrat of an unwanted sexual encounter last November. The newspaper said the information came from sources who wanted to remain anonymous. (AP Photo/Don Ryan, File) (AP)
--

Democratic Rep. David Wu of Oregon has announced that he is resigning in the wake of allegations that he had a sexual encounter with an 18-year-old woman.

Democratic leaders had called for a House Ethics investigation after the initial reports of the allegation. Wu had said that whatever occurred was consensual.

Wu said Tuesday the well-being of his children should come first, so he will resign after Congress resolves the debate over the debt ceiling.

Wu, 56, has won seven terms. In 2004, he won despite acknowledging a decades-old college incident in which he tried to force a former girlfriend to have sex. Voters said they disliked an opponent's attempt to use that against Wu as part of a political campaign.

Rep. David Wu of Oregon was being pressured to leave Congress sooner rather than later after the House Democratic leader sought an investigation into a young woman's allegation that she had an unwanted sexual encounter with him.

Wu, 56, a seven-term Democrat from Portland whose unusual behavior had been the subject of news stories earlier in the year, has said the encounter was consensual. Still, his office announced Monday that he would not seek re-election in 2012.

"He's still determining his political future, but he will not run for re-election," said Wu's spokesman, Erik Dorey. "He's fully focused on fulfilling his elected duties and serving his constituents to the best of his duties here in the House."

Nearly all the public pressure on Wu to step down was coming from his home state rather than Capitol Hill. Mary Botkin, a former Democratic National Committee committeewoman from Portland, joined those calling for his resignation. She said she has known Wu since the 1980s but that his credibility was "so severely damaged" that he should resign.

The 1st Congressional District, located in Oregon's northwest corner, has been reliably Democratic since the mid-1970s. New boundaries approved this year by the state Legislature are expected to provide a small boost to Republicans. Not yet known is the size of the shadow over any Democratic candidate an investigation into Wu's behavior might create.

House Democratic leader Nancy Pelosi of California on Monday requested an Ethics Committee investigation into the allegation against Wu. Fellow Democrats appeared wary of getting ahead of her request. When asked if he thought Wu should resign, Rep. Steny Hoyer of Maryland, the No. 2 Democrat in the House, said he wanted to learn more before commenting.

"I don't know the facts. Certainly, I agree with Leader Pelosi that the Ethics Committee must look at this and must look at it at an accelerated fashion," Hoyer said. "There has been an allegation made and we need to know the merits of that allegation."

Rep. John Larson, D-Conn., said he spoke with Wu over the weekend, and he hinted that Wu is confronting the issue of whether he should resign.

"I asked him how he was doing, and I told him he should be concerned first and foremost about his children and his family. He acknowledged that, and he acknowledged he has a very difficult decision coming up," Larson said.

Wu was guaranteed a stiff primary challenge after seven staffers resigned in January because of unusual behavior that included an angry public speech and a photo of himself in a tiger costume that he sent to a staff member. Wu attributed his actions to a period of mental health challenges that began in 2008 as marital issues led to separation from his wife.

Those problems paled compared to the potential fallout from the encounter with an 18-year-old California woman. Citing anonymous sources, The Oregonian reported that Wu told senior aides that the sexual encounter was consensual. The Portland paper reported Facebook notes indicated she graduated from high school in 2010 and she registered to vote in California last August.

The paper said the woman decided not to press charges against Wu because there were no witnesses and it would have been her word against Wu's.

In 2004, Wu won re-election in spite of acknowledging a decades-old college incident in which he tried to force a former girlfriend to have sex. Voters said they disliked an opponent's attempt to use that against Wu.

It took several days before the scandal that enveloped former Rep. Anthony Weiner, D-N.Y., turned into a media frenzy. Wu could still face such a development if more information surfaces. But he was largely absent from lawmakers' public comments Monday.

Democratic leaders held a news conference to discuss the debt ceiling and the economy, and Wu's name did not come up once. Republicans also focused their attention on the debt ceiling, with no GOP leaders calling publicly for Wu to resign.