Women at 40: The hysteria that won't die 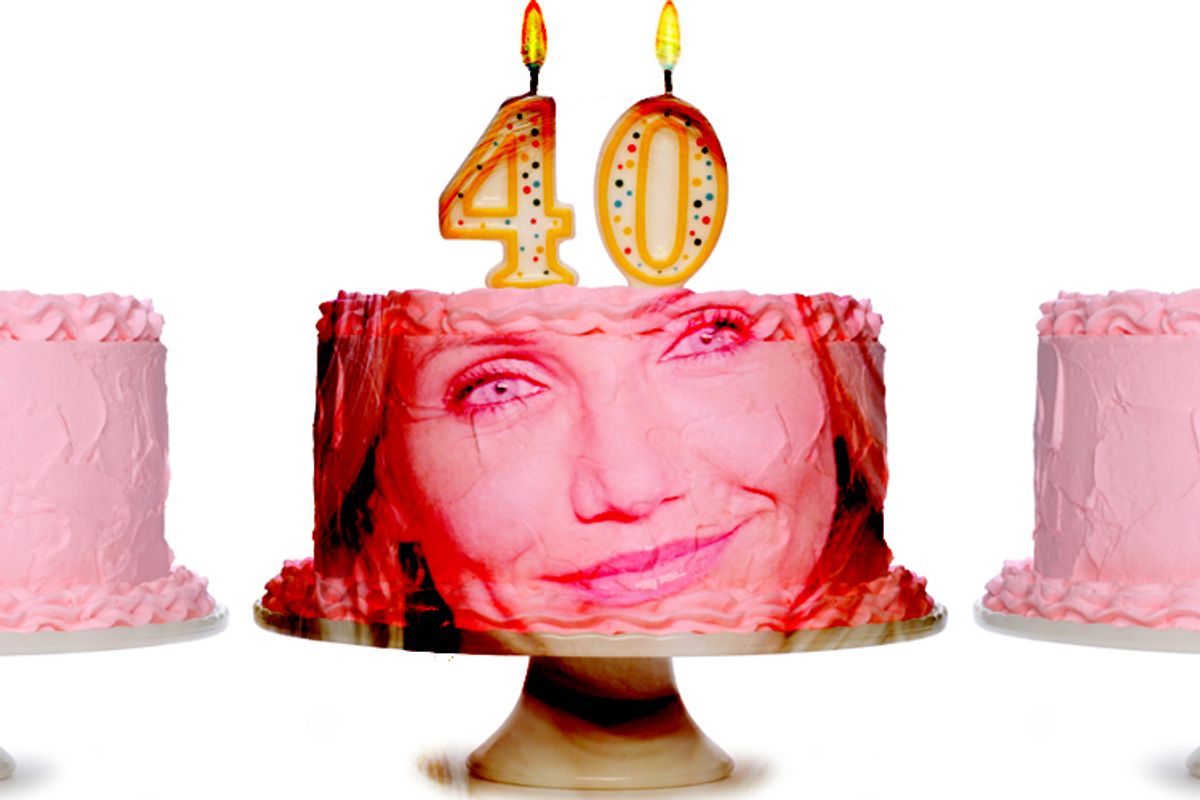 Wait just a darn minute here. I thought we'd established years ago that a woman's 40s were supposed to be nothing but MILFy, cougary good times, that the big 4-0 was universally decreed as the new 30. And it is, ladies, it is! But go ahead and freak out anyway.

In a story seemingly designed to give you new derisive laugh lines, behold the recent USA Today scare story wrapped up as an empowerment trend piece that decreed that "Among Generation X women, age 40 is party time." Sure, that Sebastopol mother of two knows that her birthday "looms large." But she's "not bemoaning the fact that she's on the cusp of middle age. She's planning to party." What, no ice floe into oblivion? Instead, she and other women are using their milestone birthdays "to proclaim they're healthy, they're sexy and they haven't lost their mojo." Or, as one partier explains, "Look at me. I have so much more life to live and I'm very vibrant and successful, instead of crying in the corner." Wow, and here I was unaware that turning 40 ever meant a crying jag in the corner or the revocation of one's mojo card. Well, good for you, sisters!

It seems even in an era when 40-somethings like Halle Berry, Jennifer Aniston and Julia Roberts still regularly grace magazine covers, the formidable cultural baggage of that number remains. Cameron Diaz had to make it clear to Cleo magazine recently that "there's nothing scary about [turning 40] at all. Life is so much better as you get older. I feel stronger, better, more capable, more fulfilled, and happier than I ever did when I was 29, when I was 30, even 35." A fine sentiment, but why did the interviewer have to suggest it was "scary" in the first place? And in an interview for the Telegraph this week, soon-to-be-40 actress Emily Mortimer says, "I recently realized that my son's friends don't think of me as a young lady -- which is how I think of myself -- but as some old bat who comes to pick up their friend from school. Your idea of yourself has to start to change and that's quite difficult." As someone who is comfortably settled into her 40s, let me break it down for you, USA Today trend piece writers and celebrity interviewers. Shut up.

Writing in Jezebel Tuesday, 39-year-old Dodai Stewart explained, with admirable candor, that "I feel healthy and sexy, sure. And vibrant, and relatively happy. And yet: I associate 40 with 'older' people. Part of me has absorbed the messages our society has emitted for years: That 40 means boring, sad, old, undesirable, spinsterly, pathetic, waiting to die. I do not feel that way about myself." Dear Stewart, I promise, anybody who starts waiting to die at 40 is in for a long, miserable second half of life, because she's likely the sort of person for whom the first four decades were not so healthy and happy anyway.

Yes, some aspects of one's 40s are terrifying. But to Stewart's question, "So what is there to celebrate?" I'll say this. Much of it is not so bad. You lose some things along the way -- mostly elasticity. You gain others -- mostly perspective and gratitude, which seems like a more than generous trade-off. For what it's worth, the mojo seems to hold pretty steady. And none of it happens all at once on the anniversary of your birth. Aging is a process, just like maturity. And it has very little to do with a number on any damn cake.