Office scandal: I picked a cubicle over an office

I didn't think it would be a big deal. But my casual ripple in protocol ended in a minor office breakdown 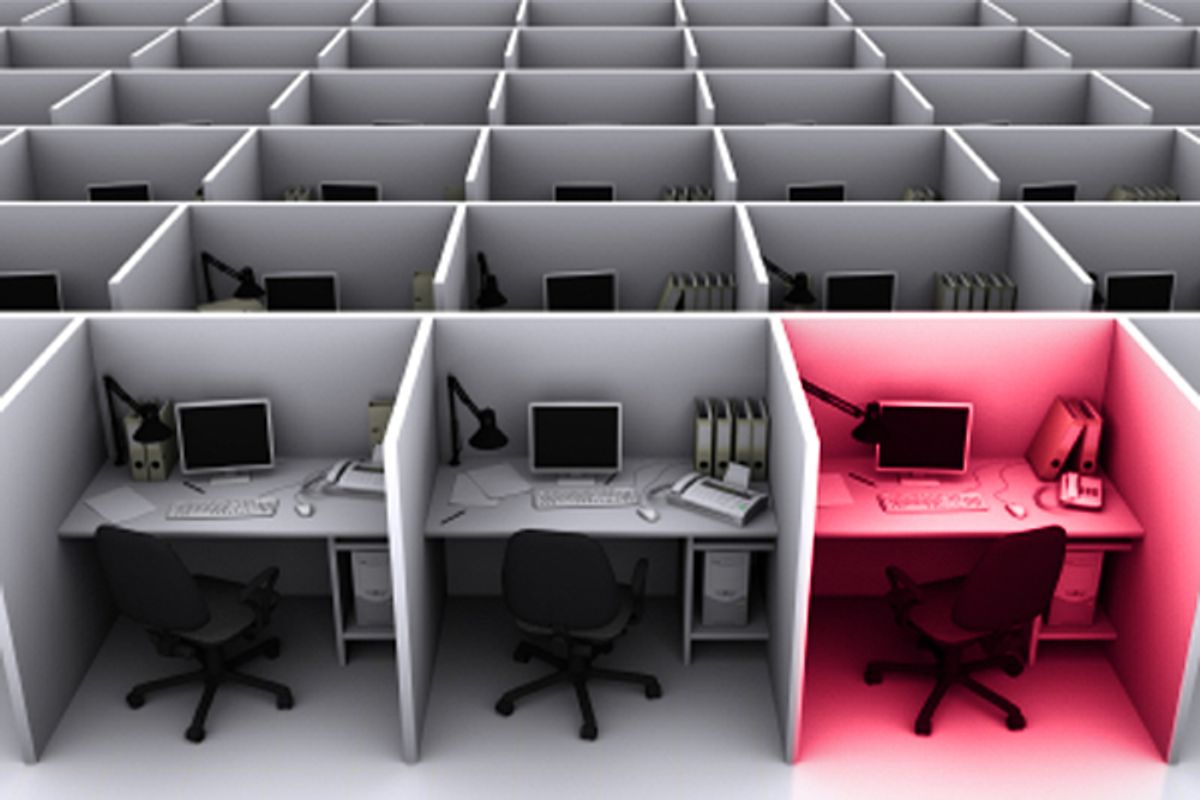 My colleagues gasp. A minute ago they were chatting by the conference room door. Now they lean over me and squint at the floor plan, agitated and curious.

"The cubicle? Are you kidding?" sputters the attorney in charge of the office selection process.

We, a group of lawyers in a federal agency, are relocating from one floor to another in our building to satisfy a rumored need for greater efficiency. It is a colossal and expensive hassle with only a marginal chance that anything good will come of it, but I suppose this is true for many of the best things in life. Like law school.

"No, I'm serious," I say. And I am. "It's got lots of room, modern furniture, a beautiful view of the city, and, well, it's airy." I'm a sucker for beautiful views. I thought a law degree would get me those views, open doors for me, expand the set of things I can do for a living that will make me happy. I am convinced that my degree will, in fact, do those things -- just as soon as that siren Sallie Mae, to whom I committed long before I fully appreciated the power of compounding interest, finally grants me a divorce. I estimate that, assuming my current (frozen) salary and the exorbitant cost of dry cleaning remain constant, this will happen in approximately 439 months. There's a chance I might still be alive by then.

"Airy? Airy?" The lawyer in charge is turning pink. "But you're an attorney! Attorneys go in offices. Secretaries go in cubicles. Where will your secretary go?"

"My department hasn't got a secretary," I say. I know this to be true because I've worked in the government for 10 years and we have had secretaries before. I know what they look like and sound like. They're wonderful. We don't have one.

"I know you don't have one now, but what if you do get a secretary?" he asks, triumphant. "Where will they go?" We in government know it's better to have our pronouns and antecedents disagree in number than to tolerate gender stereotypes. And, in fact, one of the best secretaries we ever had was a guy. He had two master's degrees and had killed people (quite legally) before taking a job with us. His experience suited us brilliantly: competent and deadly is a combination of attributes that lawyers value highly in support staff. But, sadly for us, his skill set suited other employers quite nicely, too, and they paid more. He's having a standout career at the moment and, incidentally, he has his own office.

"He or she can take one of these five empty offices, see here?" I point at several vacant spaces on the floor plan.

He sighs. "I will have to ask about this."

"Of course. I didn't mean to be difficult. It's just that the next available office has no window. I'd rather have a window than walls. You see?" I smile, but not too widely. I am showing him that my decision is rational. It is unwise to appear unhinged at a federal agency because concerned supervisors can do things like report you to the psychological assistance program and concerned co-workers can report you to the inspector general. This is how more window offices open up.

A week later, I get a call from our harried office administrator.

"A Decision has been made," she says. I know the situation is grave because passive voice is being used. "You cannot go into a cubicle. I found a window office for you."

"Ah. Is this a Rule, no attorneys in cubicles?" I'm a lawyer, after all: I know Rules are sacrosanct. I would need no further explanation if it were a Rule, no matter how silly. And, as you know, I work in the government: I have seen some very silly Rules and have even written a few myself. My apologies; I meant well.

"Well, no, it's not a Rule, exactly. It's just that when another department moved last week there weren't enough cubicles in the new space for all three of their secretaries. I had to put one secretary in an office. It caused the others to have a complete meltdown."

"That's awful. How did you resolve the situation?" I decide I am not going to comment on the obvious disparity between the three-secretary department and my zero-secretary department. I choose to believe that my colleagues are simply more emotionally independent.

"Undesirable?" I imagine toxic fungi, rodents of unusual size, and zealous vacuuming crews who get their best groove on at around 9:30 a.m. But this is the government, after all, and our resources (and imagination) are notoriously limited.

"I took a load of boxes from the file room and piled them in with her. It's very cramped in there now and she's quite unhappy. It appears to have placated the others, for now."

"Hmmm." She is not amused. "Look, just take the office and leave open the cubicle, will you? Don't give them a reason to have a fit about your hypothetical secretary getting a hypothetical office someday," she pleads.

I flirt with the idea of insisting on the cubicle. I could stage a peaceful demonstration and draw attention to the absurdity of class distinctions in corporate society. I could decorate my space with lava lamps and a disco ball, have frequent and impressively loud conversations on speakerphone with my mother, and roll out my yoga mat every morning at 11 for sun salutations. Everyone would be invited --  required, even -- to participate in my day.

Then I realize: No one wants to participate in my day. I spend it reading, thinking, squinting, scowling, typing and making occasional trips to the restroom. Just as my colleagues do, attorneys and secretaries alike. And we all perform these functions more efficiently, or at least with less anxiety, when we know what to expect from each other and know where the boundaries are. The secretaries don't want me glorifying cubicle life to make a point. They want me in my office, where I can be watched and contained. I decide there is, perhaps, a wisdom in that. And it occurs to me that I might gain a more valuable and lasting victory for my chronically understaffed department if I keep quiet and take the office.

"All right, then. I'll move into the office if I can hire someone to fill our cubicle. I want to find my group another killer secretary."

"Whatever you want," she says, audibly relieved.

"Excellent." I start looking for the email address of our former secretary. Maybe he knows someone about to finish a combat tour.

"By the way," she adds, "we have a lot of extra space in the file room now. Do you have any boxes you want out of your way?"

"Yeah, I have a few things for the file room. I don't want anything blocking my window."

Jodie Dalton is an attorney living in the Washington DC metro area. She reads, thinks, squints, scowls, and types -- at work and for fun. Follow her on Twitter at JJ_Dalton.