Bloomberg and Friedman pretend partisan fighting is ruining our country. The real problem is too much consensus 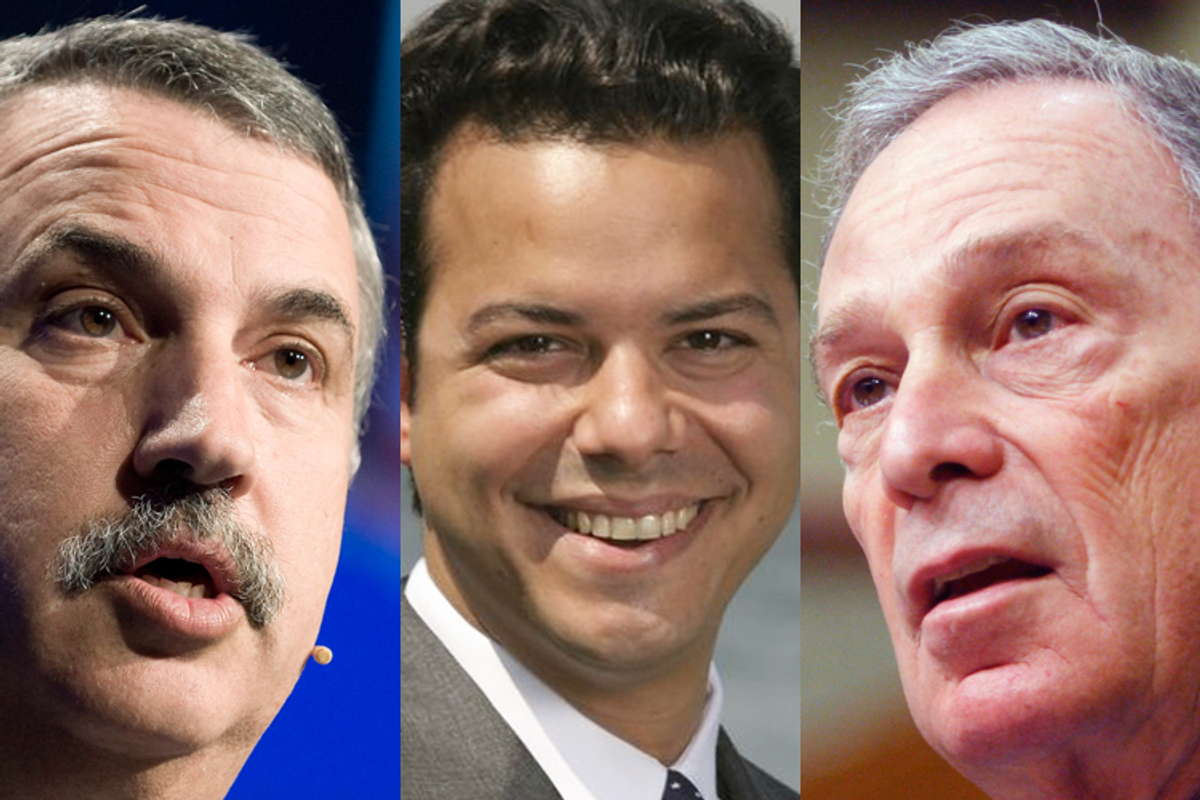 Given that we're a little more than a year away from another election circus, it's no surprise that the now-traditional festivities of the modern electoral grotesquerie have begun in earnest. It always unfolds this way: Toward the middle of an odd-numbered year, you start feeling that rumble of the distant train creaking into town. Soon after, the familiar bustle returns: the professional polling prognosticators doing their best fortune teller impressions; the carnies in the political operative class busily setting up their tent-pole campaign headquarters; the drooling campaign reporters hollering at the boisterous pack of freakshow-caliber candidates; and the wing-tipped emcees in the White House beckoning passersby with bold-but-patently-absurd promises of great things yet to come (all for the price of a campaign contribution, of course).

Here we have the modern political bazaar, and it wouldn't be complete without the most reliably ridiculous troupe of all: the Third-Party Fetishists. Out of all the other sideshows, they are the ones most aggressively ramping up their 2012 act at the moment.

You're familiar with this merry band of elites because you've seen them bound out of their clown car so many times before. A few years ago they called their show "No Labels." This year, they'll probably come up with a new catch phrase. Regardless of names, though, their brand of fabulist performance art remains the same: Every off-year summer, they leave their comfortable office suites and storm out onto high society stages like the Aspen Ideas Festival, C-Span symposia, Sunday chat shows and elite newspaper op-ed pages to insist that our nation's real problem is our lack of a third party willing to break the alleged two-party "gridlock."

As both Dartmouth professor Brendan Nyhan and the Columbia Journalism Review show, this act is so unerringly consistent that it has become clich#&233;. And yet despite its maddening monotony, it remains a popular cottage industry. Indeed, from the pornstachioed Thomas Friedman to the Gordon Gekko-haired Jon Avlon to the monocle-and-top-hat-worthy Michael Bloomberg, the Third Party Fetishists provide a glorious career for its most slavishly devoted and dishonest cast members -- and, hey, as grifter jobs go, it's a damn good living.

Don't be fooled, though -- like so many eye-popping acts on the midway, their confidence game is another cheap swindle that aims to obscure two inconvenient truths: 1) There is barely any real "gridlock" and almost no lack of consensus in American politics, and 2) There is no lack of a third party in America -- there are viable, powerful third parties operating in this country, just not ones that represent the wildly unpopular brand of elitist corporatism that the Third Party Fetishists dream of.

On the first point, my Salon colleague Glenn Greenwald has expertly documented the current supremacy of transpartisan consensus. Setting aside the Third Party Fetishists' platitudes about "polarization," Glenn uses the only empirical evidence there is in politics -- congressional votes -- to show how on everything from war, to civil liberties, to budget cuts, to financial deregulation, to high-income tax cuts, to Supreme Court nominations, to assaults on public education, to executive power grabs, a transpartisan consensus all but dominates the federal government -- and to a historically unprecedented degree.

You don't need look far to see that consensus in action -- just check out the current debt ceiling brouhaha. Paraded around by carnival barkers as supposed proof of unprecedented division and rancor, the moment's manufactured crisis in Washington actually exemplifies all the hallmarks of transpartisan consensus, as the Democratic president and the Republican congressional leadership essentially agree that Social Security and Medicare should be slashed, corporate taxes should be cut, taxes on the wealthy shouldn't be significantly raised and defense spending should face only minimal reductions. The only real "debate" is about the specific numbers -- not about whether such an extreme set of priorities is the proper way to balance a budget.

Apparently, though, this level of unprecedented consensus still isn't enough for the Third Party Fetishists -- they pine for total unhindered lockstep control. So they seize on the presidential election circus to pretend America is afflicted by a lack of any powerful third parties.

Now, it's certainly true that there are no viable third parties that represent the Fetishists' mix of hard-core economic conservatism and vague social libertarianism. There are no viable third parties like that because, outside of green rooms in Washington, D.C. and cocktail parties in Manhattan, there is no mass constituency for that kind of agenda. However, it's a fallacy to claim that there aren't powerful independent third parties breaking apart the political duopoly in America. There most certainly are.

In New York, the home of the financial industry behemoth, the Working Families Party is now regularly billed as one of the state's single most powerful political forces. Over the years, it has played a critical role in everything from halting unbridled gas exploration to raising the minimum wage to reducing consumers' utility bills to taking on the real estate industry's most rapacious practices.

In Oregon, where the Working Families Party has only recently started organizing, the fledgling third party led a campaign to end the state's dependence on Wall Street with a proposal to create a state-owned non-profit bank. Though the bill ultimately failed, the party managed to power it through a series of legislative committees -- and the proposal will likely be back in the next session.

And, not to be forgotten, is Vermont -- the state that recently made national headlines as the first in America to successfully go up against the for-profit health insurance industry and begin legislating a single-payer system. That's the same state that is home to the Progressive Party, which regularly elects its candidates to municipal and state legislative office.

In the national political circus, though, clowns like Tom Friedman and his ilk hope their cacophonous sideshow of carping and whining and dissembling about third parties can distract us from the real success and potential of third parties in America. They don't want us to know about these third parties because these parties advocate for an anti-corporatist agenda with mass popular support. That offends and threatens the bosses in the Big Top -- and if the Third Party Fetishists are loyal to anything, they are loyal to their establishment ringmasters.