Will Arnett is the latest to promise a big-screen version of the cult classic. But will it ever actually happen? 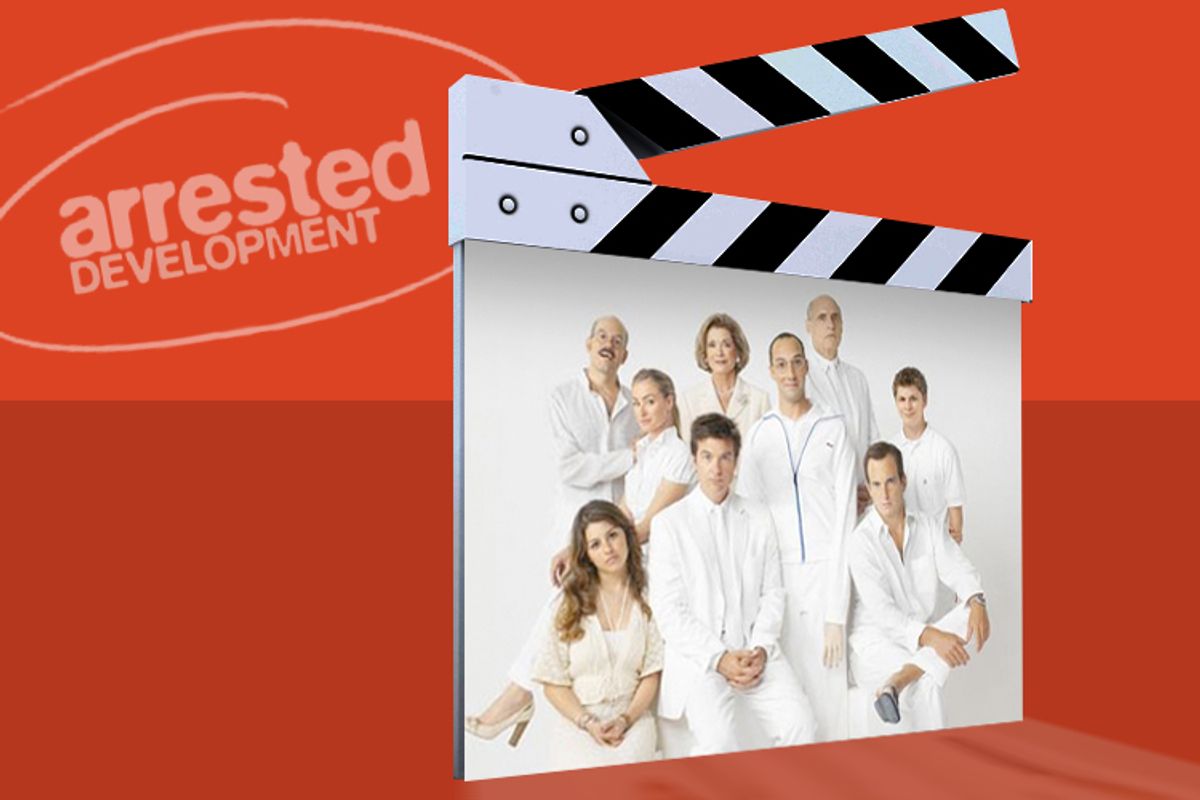 Will Arnett made a huge announcement on comedian Marc Maron's podcast earlier this month, regarding the status of a much-anticipated project. "We are gonna make the 'Arrested Development' movie," said the actor, referring to the Fox comedy that ran for three seasons and ended in 2006. "And [show creator] Mitch Hurwitz, who is really just a brilliant, brilliant guy, is in the process right now of concocting something that's really kind of unexpected, I think. That I really don't want to give away, but I think the fans are going to be really satisfied."

We might be a little more excited to hear Arnett confirm what we've been wishing and praying for over the last five years, but let's face it: We've heard this line before. We've been hearing it for half a decade from members of the cult show's cast, only to have it immediately refuted by their costars.

If you're wondering how many times the project's status has been hesitantly announced, we've put together this brief timeline of "Arrested Development" movie rumors.

September 2008: Two years after the show ended, fans are still holding their breath for a big-screen adaptation. Surprisingly, it's the shoe-gazing Michael who is allegedly holding up production by refusing to sign on to the "everyone or no one" casting demanded by Hurwitz. Cera's the first to deny rumors of the movie's existence, and then disses fans everywhere when he tells the National Post:

"I don't think I would want to see a movie of the series if I was a fan, anyway... And I don't really see a need for it if you can get the three seasons on DVD."

We can forgive Cera for maligning the show, in which he played the cousin-loving George Michael: his career post-"Development" took off after he lost all the baby fat, and he has become the series' breakout star. Who'd want to go back and remind everyone how chubby and awkward he used to be? Well... more awkward, anyway.

December 2008: During a Fancast interview, Mitch Hurwitz was asked about the rumors that Will Arnett and Michael Cera were the two cast members who refused to sign on. His response?

"I don't want to talk about who is holding out right now because we might still work that out and I don't want to pressure anyone through the press," said Hurwitz. "Although I will say that Will Arnett is gung-ho, so there's a big clue!"

February 2009: Three months later, a source told E! that Cera had reconsidered and was signing on to do the film. I bet it was Will Arnett calling him a chicken that did it.

April 2010: Jason Bateman has been the one cast member who has never doubted that "Arrested Development" will be happening. Which can be a bad thing, when he keeps promising fans a film, but never delivers. He went so far as to publicly disagree with costar David Cross to make his point:

"David says that it's dead, but it's not dead at all. Mitch Hurwitz is busy shooting a new pilot with Will Arnett, and perhaps when they're done shooting and editing and he's delivered that, perhaps he'll jump into writing the script. Once the script is done, it goes to the studio and they decide if it's a script they want to make, and the actors will decide if they want to be in it."

Which really doesn't tell us anything, does it?

January 2011: Executive producer Ron Howard continues to toy with all our hopes and dreams with a vague promise that creator Mitch Hurwitz is finally making good on the movie rumors: "All kidding aside he's been very involved in his television company and I think it's reached a point where he now has a window to really focus on Arrested Development and give it the time and attention that it really needs."

February 2011: David Cross continues to be pessimistic about the possibility of a movie at this point (and kind of a jerk about it, too):

May 2011: Hopes were faintly raised earlier this year when Hurwitz himself told Digital Spy: "We've started that process and it is our sincere hope to shoot it this year and get it out this year. That's what we're hoping, but a lot of things have to fall into place for that to happen." Sure, we've heard that line before, but Hurwitz claims he's hedging his bets for our sake. "I don't like to toy with the affections of our fans. They've been so supportive and we're so grateful, so I kind of hate to answer the question until I can say, 'Yep, we've shot it, it opens next week.'"

July 2011: During promotions for his upcoming film "Lucky," Jeffrey Tambor semi-confirmed that the movie was going full steam ahead. Tambor told the Huffington Post, "[the film is] all going straight, everyone's on board, I know they're writing, and maybe next time this year we'll be having this conversation."

July 2011: Henry Winkler tells Salon in an interview that he's cautiously optimistic. "Here's what I know," said the actor. "I know Mitch is dying to make the movie. He's working very hard on figuring it out."

You know what? I'm not playing this game anymore: Until Hurwitz actually puts up a trailer for this baby -- or at least announces a shooting schedule -- I'll just assuming he's too busy working on shows like his flop "Running Wilde" to finish the script.