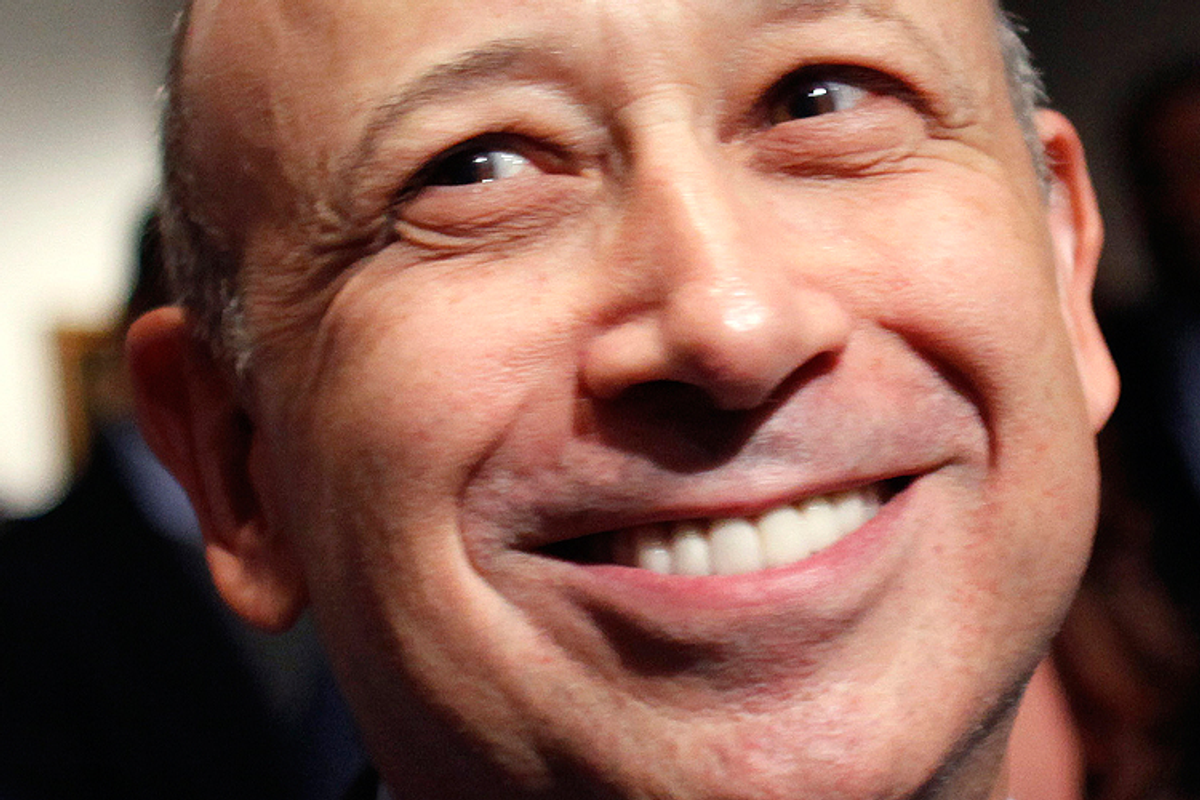 Let's start with Blankfein: This week, he was the subject of a glowing New York magazine profile that reimagined the vampire-squid investment bank as an oppressed victim of undue criticism.

The half-billion dollars Goldman made on quietly shorting the housing investments it was selling to its customers? Nothing to see here, says New York, telling us that's "not a massive amount." Deliberately pretending toxic assets were terrific deals for clients? "Sure, [Goldman] bought and sold [mortgage] debt from consumers, facilitated the sale of some of their bad debt to clients," the magazine reports, "but those were sophisticated investors, corporations, [and] pension funds" -- because, hey, it's perfectly fine to rip off 401K-ers, companies and retirees. By the time the apologia is finished, Goldman is being hailed as something akin to a benevolent, touchy-feely yoga retreat -- a place that "allows individuals to be who they are," as one executive gushes.

Blankfein is described in similarly obsequious terms. After deftly sanding down the CEO's well-earned Godzilla image to a more palatable "Woody Allen-era Brooklyn" Everyman, New York hagiographer Jessica Pressler quotes Blankfein's colleagues saying, "you will love him," arguing that "he is a misunderstood creature" and effusing that "he's just really a human."

Pressler then goes on to quote Blankfein describing himself as just a sympathetic, nebbishy self-effacing super nerd -- an Everyman who insists with a straight face that he's "blue collar." In this cartoon, he is a martyr-like figure rather than the narcissistic aristocrat who has previously justified his Greed Is Good conquest by insisting he's "doing God's work." And yet, even in trying to retroactively soften his image, the Goldman chief can't stop himself from letting fly one of the most incredibly self-serving defenses of super-wealth ever uttered. Non-ironically echoing the old "it's a tough job, but someone's gotta do it" aphorism, Blankfein justifies today's Gilded Age of gross inequality by insinuating that it's simply inevitable and that he just "happened" to be the beneficiary (emphasis added):

"It's not like I was Jay Gatsby, staring over at East Egg, being like, 'How do I get to be in that crowd?'... You know, you do stuff, and then people ask you to do more stuff," he says. "I remember once reading in a Kurt Vonnegut book the question 'How did you get here?'" he continues. "Statistically, it just seems like such a remote thing. But it's not, really, because somebody has to be here, and if another person was here instead of me, that person would be sitting here talking to you, and you'd say, 'How did you get here?' Someone had to do it. It happened to be me."

For sheer retch-inducing arrogance this week, though, the Blankfein profile was nothing next to this written-with-a-totally-straight-face New York Times expose on private jet traffic jams -- and not just any old traffic jams, mind you, but ones near elite summer camps.

The breathless story laments the fact that "for decades, parents in the Northeast who sent their children to summer camp faced the same arduous logistics of traveling long distances to remote towns." But, luckily, reports the Times, "even as the economy limps along, more of the nation's wealthier families are cutting out the car ride and chartering planes" for their visits.

Times editors, who regularly lament the declining state of journalism in America, decided this particular story was so important that they threw not one but two correspondents at it -- and, for Onion parody value, that expenditure of scarce reporting resources certainly delivered a doozy. As if deliberately aiming for a mounting "let them eat cake" crescendo, the piece gets aggressively more nauseating by the paragraph.

Toward the end, one woman seems to justify her chartered jet extravagance by noting that she was at least more frugal than the "large part of the parents at my kid's camp [who] own their own planes." That's followed by a final paragraph quoting a lawyer first complaining about the elitism she experienced when she initially traveled to her kids' Maine camps by private jet. She then adds that she's decided to avoid such offensive opulence by instead flying her kids across the pond to camps in Europe.