A taxpayer-supported campaign against Big Government

ALEC, one of the right's premier ideas factories, has been the recipient of public money in several states 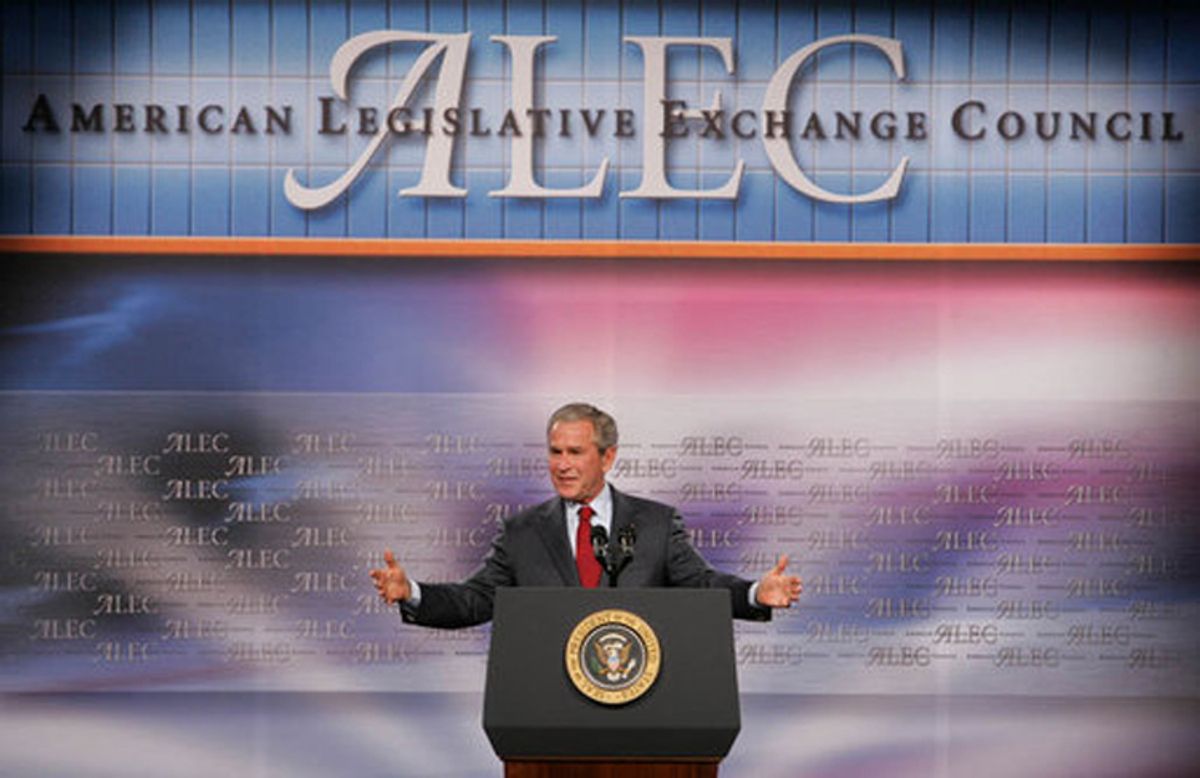 Taxpayer dollars in Pennsylvania, Wisconsin, Tennessee and Kansas are being spent to fund state lawmakers' memberships in the conservative American Legislative Exchange Council (ALEC), which provides model state legislation drafted with the help of big business. In some of the states, public money has gone to travel and food expenses as well, including in Pennsylvania, whose taxpayers spent $50,000 to cater ALEC’s 2007 conference in Philadelphia.

The public money is helping to fund the activities of an organization dedicated to drastically cutting government spending and whose non-profit status is currently being challenged by Common Cause, which contends that ALEC is essentially a lobbying organization. Corporations are given a direct role in drafting the model legislation that ALEC urges states to adopt -- legislation that, if enacted, often benefits the same corporations. ALEC defines itself as a professional association, just like scrupulously nonpartisan organizations like the National Conference of State Legislatures and The Council of State Governments, which legislators commonly belong to.

"ALEC receives payment from a variety of sources, sometimes in the form of educational grants for legislative members," ALEC spokeswoman Raegan Weber wrote in an email to Salon. "ALEC provides an educational environment to hear from experts on a variety of issues including education, public safety, health care and tax and fiscal policy."

The most notable disbursement of public money to ALEC, discovered in documents obtained by this reporter from Common Cause for a separate Philadelphia City Paper article, took place in Pennsylvania, where a $50,000 appropriation to cater the ALEC meeting was slipped into the 2007 state budget. The food bill for that gathering ended up including $30,450 for roasted chicken breast, $4,000 for Philly cheese-steaks and $3,000 for cheesecake lollipops -- all of it paid for by Pennsylvania taxpayers.

In the budget, the ALEC outlay was described as being "for the payment of expenses related to hosting conferences, meetings or conventions of multistage organizations which protect the member states’ interests or which promote governmental financial excellence or accountability."

"This was something that was hidden from members and no one knew anything about this," former State Rep. Karen Beyer, a moderate Republican ousted in 2010 by a Tea Party-backed primary challenger, told Salon.

Asked if this was appropriate for state money to be spent this way, Raegan replied, "ALEC events are educational forums; this includes plenary meal sessions with hundreds of members."

Sam Rohrer, the director of the Pennsylvania chapter of the conservative group Americans for Prosperity and a former state representative, defended that explanation.

"The tradition in Pennsylvania is for the corporate interests to pay for our lawmakers’ merriment, not the other way around," Terry Shaffer of Democracy Rising PA, a prominent Harrisburg watchdog, said in an email. "We can see it in their ethics filings -- at least, the ones in which they bother to include the gifts. The taxpayers should not pay for a partisan organization's cold-cuts."

Pennsylvania also paid per diems to legislators attending ALEC conferences, and reimbursed them for other expenses relating to their travel -- $6,667.78 since 2007.

One Republican state representative, Daryl Metcalfe, perhaps the state's most outspokenly conservative legislator, has received per diems for three ALEC conferences, including one as recently as last December. According to state documents Metcalfe received state per diems for ALEC conferences in both 2007 and 2009, two years that ALEC also reimbursed Metcalfe for, respectively $832.91 and $1,464.51.

Metcalfe is the founder of State Legislators for Legal Immigration (SLLI), the national group of state lawmakers that is seeking to deny birthright citizenship to the children of non-citizens, and he has introduced numerous pieces of legislation reflecting ALEC's priorities, including a voter ID bill.

Alexis Brown, the comptroller for the Pennsylvania House of Representatives, refused to explain how her office decides what is and is not a permissible business expense that can be reimbursed with public funds.

Republican Majority Leader Michael Turzai has also had membership dues paid for by the state, something that Turzai's spokesman, Steve Mishkin, defended.

"It’s always good to hear from the experience of other legislatures," he said. "That’s how you exchange ideas, best practices, and try to bring those to Pennsylvania’s problem."

Mishkin likened ALEC to the NCSL, but the NCSL doesn't develop and promote model legislation with corporate input and is open to legislators regardless of their ideology. ALEC, by contrast, boasts that its conference "has been described as the 'largest gathering of conservatives held each year.'"

The use of public money for ALEC are beginning to draw attention nationwide. The Lawrence Journal-World has reported that Kansas taxpayers paid $9,132 to send thirteen house members and four state senators to ALEC in 2010; the Tennessean has found that in 2010, Tennessee taxpayers paid $15,000 for a San Diego conference; and the liberal advocacy group OneWisconsin has discovered that Wisconsin paid for memberships for 12 state senators.

Many fiscal conservatives have long been critical of recipients of taxpayer funds spending money to lobby the government. David Boaz of the Cato Institute, for instance, has attacked the idea of "a government-funded entity...using its taxpayer funds to lobby to get more money from the taxpayers." Through a spokesperson, Boaz declined to comment for this article, saying that it would be unfair to discuss ALEC in isolation from other organizations.

"It’s worth the ethics commission looking at whether ALEC is acting as a lobbyist in violation of state lobbyist disclosure law,” said Barry Kauffman of Pennsylvania Common Cause. "From what I’ve read, it seems like they should be registering and reporting."