Big brands come under fire for misleading and offensive ads. Why did these ever run? 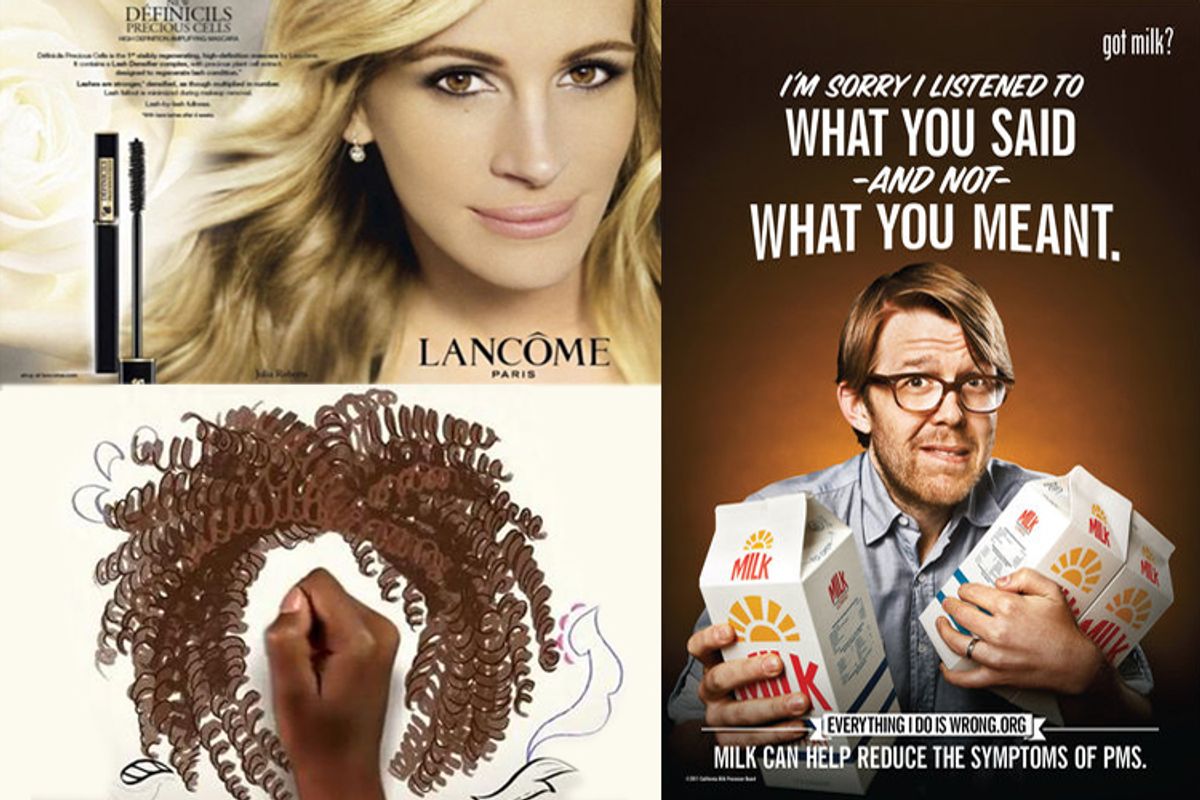 Maybe those talking vaginas weren't such a hot idea after all. Ditto the whole raging hormone-monsters campaign. And apparently some people didn't get the memo that too much Photoshop is not a good thing. Welcome to your week in hastily withdrawn ad campaigns!

First up, the British Advertising Standards Authority has this week banned two makeup ads -- a Lancome campaign featuring a seemingly sandblasted Julia Roberts and a Maybelline one with some unlikely before-and-after effects on Christy Turlington. Lancome, which called the image of Roberts an "aspirational picture," acknowledged some touching-up but insisted that the work was not "directly relevant" to the ad. The BASA begged to differ, calling the tactics "misleading." It's universally understood that an expensive campaign for a beauty product, featuring a famous woman, will be created to look as good as humanly possible. Still, it's a welcome sign when advertisers are called out on their BS when they stray directly into inhumanly impossible turf.

Meanwhile, back in the colonies, it's not deceptive advertising that's been the problem lately, but advertisers' pathetic attempts at keepin' it real. When last we checked in on the Bad Ideas front, the California Milk Processor Board was dangling the carrot of milk as a balm for PMS with a lighthearted, 'nads busting "Everything I do is wrong" campaign of groveling males brandishing cartons of dairy in the direction of out-of-control females. With an online "home for your PMS management" to help men deal with their "irrational" ladyfolk, the campaign pandered to the lowest typecasting of both men and women -- and reinforced the notion that women's issues are guy problems.

Though it had its fans -- Time called it "audacious and funny" -- not everyone thought the campaign, unsurprisingly created by a bunch of dudes, was the height of hilarity. After a torrent of negative press and a social media crapstorm, it was abruptly pulled last week. So now "Everything I do is wrong" has morphed into a "Got discussion?" microsite, featuring the non-apology that "some people found our campaign... to be outrageous and misguided -- and we apologize to those we offended. Others thought it was funny and educational." See? SOME people got the joke. Steve James of the California Milk Board told the New York Times this week that "there's no sense in keeping up a web site that's like waving a red flag to some people." Then he added: "I don't see it as ending it or pulling the plug. We accomplished what we set out to accomplish." Which apparently was pissing off female consumers. Well played, lads. You win!

The folks at Summer's Eve must be feeling likewise victorious after pulling three whoppingly ill-advised videos from their kooky "Hail to the V" campaign. The videos -- sadly lost now to the mists of times but roundly mocked on Regretsy and elsewhere -- featured a sassy trio of African-American, Latina and white girl stereotypes, performed by racially diverse hands. Apparently, black vaginas, also known by their drag name "Lady Wowsa," are very excited about going to the club. Latina vaginas say things "Ai yi yi," and white vaginas are really boring.

From the moment the ads appeared, America talked to the hand -- and essentially told it to pipe down. It was instantly derided and parodied, most notably in a "Colbert Report" "Hail to the D" segment that brilliantly illustrated the absurdity of using blabbermouth genitalia stand-ins as pitchmen. Just last week, the Richards Group was standing behind its ads, citing "in-house multi-cultural experts" and calling the spots "relatable." But now the company's Stacie Barnett tells AdWeek that "Stereotyping or being offensive was not our intention in any way, shape or form. The decision to take the videos down is about acknowledging that there's backlash here. We want to move beyond that and focus on the greater mission." Selling douche. (Amazingly, the white talking V still remains on Summer's Eve's Web page.)

At best, the fact that these two campaigns have been shelved suggests that advertisers are waking up to the possibility that making dumb sport of women and minorities isn't the way to win fans or move products. But it's nonetheless disheartening, in a field glutted with relentless competition for our eyeballs, that these crap campaigns have now received far more attention for awfulness than mere cleverness and competence could ever have netted their brands in the first place.