An un-American response to the Oslo attack 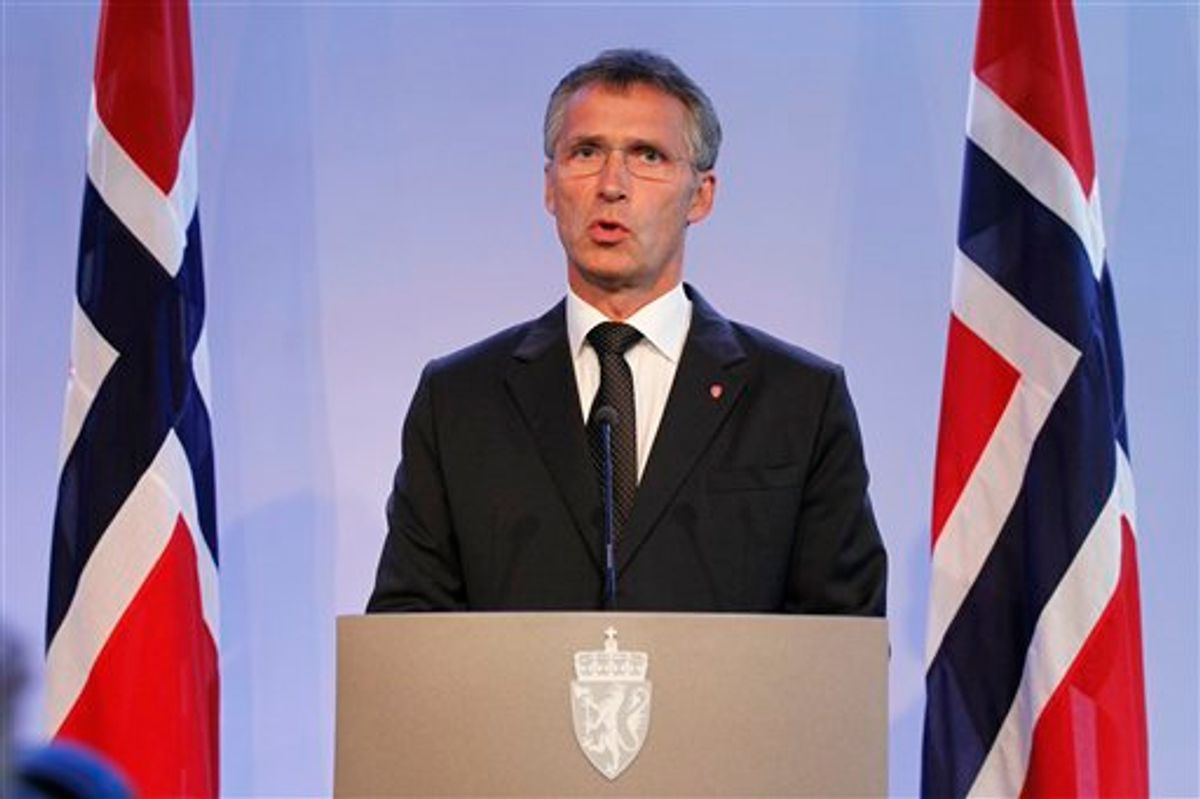 Over the last decade, virtually every Terrorist plot aimed at the U.S. -- whether successful or failed -- has provoked greater security and surveillance measures.  Within a matter of mere weeks, the 9/11 attacks infamously spawned a vast new surveillance statute (the Patriot Act), a secretly implemented warrantless eavesdropping program in violation of the law, an explosion of domestic surveillance contracts, a vastly fortified secrecy regime, and endless wars in multiple countries.  As it turned out, that massive over-reaction was not a crisis-driven anomaly but rather the template for future actions.

The failed Christmas Day bombing over Detroit led to an erosion of Miranda rights and judge-free detentions as well as a due-process free assassination program aimed at an Muslim American preacher whose message allegedly "inspired" the attacker.  The failed Times Square bombing was repeatedly cited to justify reform-free extension of the Patriot Act along with a slew of measures to maximize government scrutiny of the Internet.  That failed plot, along with Nidal Hasan's shooting at Fort Hood, provoked McCarthyite Congressional hearings into American Muslims and helped sustain a shockingly broad interpretation of "material support for Terrorism" that criminalizes free speech.  In sum, every Terrorist plot is immediately exploited as a pretext for expanding America's Security State; the response to every plot: we need to sacrifice more liberties, increase secrecy, and further empower the government.

The reaction to the heinous Oslo attack by Norway's political class has been exactly the opposite: a steadfast refusal to succumb to hysteria and a security-über-alles mentality.  The day after the attack -- one which, per capita, was as significant for Norway as 9/11 was for the U.S. -- Oslo Mayor Fabian Stang, when asked whether greater security measures were needed, sternly rejected that notion:  "I don't think security can solve problems. We need to teach greater respect."  It is simply inconceivable that any significant U.S. politician -- the day after an attack of that magnitude -- would publicly reject calls for greater security measures.  Similarly inconceivable for American political discourse is the equally brave response of the country's Prime Minister, Jens Stoltenberg, whose office was the target of the bomb and whose Labour Party was the sponsor of the camp where dozens of teenagers were shot:

He called on his country to react by more tightly embracing, rather than abandoning, the culture of tolerance that Anders Behring Breivik said he was trying to destroy.

Stoltenberg strongly defended the right to speak freely -- even if it includes extremist views such as Breivik’s.

“We have to be very clear to distinguish between extreme views, opinions — that’s completely legal, legitimate to have. What is not legitimate is to try to implement those extreme views by using violence,” he said in English.

Stoltenberg’s promise in the face of twin attacks signaled a contrast to the U.S. response after the 9/11 attacks, when Washington gave more leeway to perform wiretaps and search records.

It reflects the difference between the two countries’ approaches to terrorism. The U.S. has been frustrated by what it considers Scandinavia’s lack of aggressive investigation and arrests.

Since the attacks, Stoltenberg and members of Norway’s royal family have underlined the country's openness by making public appearances with little visible security.

Norway's government understandably intends to investigate what happened and correct any needed gaps in security, such as slow police response; but what it refuses to do is transform itself into a closed, secret surveillance state.  About all of this, The New York Times today says that "Norway’s policy on public security [] seemed defined by a belief that bad things happen elsewhere."  No: it is defined by a belief that there are other values besides security that matter a great deal and that pursuing security above all other values, in a quest for absolute safety, is both self-destructive and futile.

This realization was once not only common in the American political ethos, but its defining feature.  Patrick Henry's decree -- give me liberty or give me death -- resonated for generations precisely because it underscored that Americans were willing to subordinate physical security to other values (such as freedom and privacy).  The American Revolutionaries were long revered in our political culture because -- by risking everything, including their lives, to wage war against the most powerful empire on Earth -- they chose liberty and freedom from state intrusion over personal security.

Multiple provisions of the U.S. Constitution reflect this same prioritization of values.  The Fourth Amendment bars the police from entering our homes without search warrants and probable cause even though that restriction means that some of the most heinous and dangerous of criminals -- from mass murderers to child rapists -- will remain un-apprehended.  The Fifth Amendment bars imprisonment without due process and the Bill of Rights imposes a slew of restrictions on the state's power to convict accused criminals even though it means that those same horrific criminals may sometimes go free, able to commit their crimes again.  This subordination of security to other values was long the defining attribute of the American political identity, because we didn't want to live in a Singapore-like Security State or an East-German-like Surveillance State.

All of this has given way -- among the political class in the U.S. -- to a supreme fixation on safety at the expense of every other value: a fixation that is in equal measures cowardly, authoritarian and exploitative.  Patrick Henry's long celebrated tribute to courage has been turned on its head by the degraded cowardice of GOP tough-guy leaders -- such as Pat Roberts, John Cornyn, and Rush Limbaugh -- shrieking that civil liberties are worthless if you're dead: i.e., that safety is the paramount goal.  Meanwhile, as virtually every other country that suffers a horrendous Terrorist attack puts the accused perpetrators on trial in their real court system in the city where the attack occurred -- the subway bombers in London, the train bombers in Madrid, the shooters in Mumbai, the Bali nightclub bombers in Indonesia -- it is only the U.S., the self-proclaimed Home of the Brave, that is too frightened to do so, instead concocting military tribunals and sticking accused terrorists in cages on a Caribbean island, as members of both parties spew base fear-mongering to bar trials on American soil.

Just to highlight how extreme is the fear-based American repudiation of openness and transparency, consider the responses to the efforts of two Democratic Senators, Sens. Wyden and Udall, to force the Obama administration to explain what Wyden previously called the Secret Patriot Act:

The Obama administration continued Wednesday to resist the efforts of two Democratic senators to learn more about the government’s interpretation of domestic surveillance law, stating that “it is not reasonably possible” to identify the number of Americans whose communications may have been monitored under the statute. . . .

“Every time the American public finds out that laws have been rewritten in secret or the administration can't give a basic answer, it erodes public confidence and makes it harder for intelligence agencies to do their jobs,” said Wyden, who for the past two years has decried what he calls a de facto "secret law" governing domestic surveillance.

So drowning in secrecy is the National Security State that the Obama administration refuses even to explain how it interprets and applies surveillance powers enacted by Congress.  Even more perverse, the article describes how the Obama administration has been touting its commitment to openness by hailing the declassification of a 200-year-old document on cryptography: one that has been publicly available for years in Europe.  As a new ACLU report documents -- one co-authored by former FBI agent Mike German -- "We are now living in an age of government secrecy run amok."

What's most striking, and ironic, is that the Norwegian response to the Oslo attack is so glaringly un-American even though its core premise -- a brave refusal to sacrifice liberty and transparency in the name of fear and security -- was once the political value Americans boasted of exhibiting most.  What we now have instead is the instinctive exploitation by political elites of every threat -- real and imagined -- as a means of eroding liberties, privacy and openness, based in part on fear and in part on an opportunistic desire for greater power.  That's why Norway's courageous, principled response seems so foreign to American eyes and ears.

UPDATE:  Several commenters argue that Norway would have been less restrained had the attack been perpetrated by foreign Muslims rather than a domestic Terrorist; some similarly claim that the U.S. did not implement new security laws when attacked by domestic Terrorists such as Timothy McVeigh.  Leaving aside the fact that many of the above-referenced increased U.S. Security State measures were "justified" by acts by American citizens (Nidal Hasan, Faisal Shazad, Anwar Awlaki), this argument is misguided for several reasons.

Norway has long faced serious tensions over the alleged Islamic threat -- both because of their active participation in Western wars in Muslim countries and a growing Muslim immigration population (which is what motivated the attacker) -- and yet, as the articles linked above from the Post and the NYT demonstrate, the Norwegians have long resisted pressure from the U.S. to implement the type of surveillance and monitoring programs now so pervasive in the West to monitor Islamic extremists.  The courageous restraint exhibited by the Norwegians in the wake of the Oslo attack is perfectly consistent with how they've responded to the alleged threat of Terrorism from radical Muslims as well.

Conversely, the U.S. Government most certainly did pursue vastly increased security powers in the name of McVeigh's attack:  the Clinton administration, citing the Oklahoma City attack, demanded a full-scale prohibition on all computer encryption that the Government could not access, as well as significantly increased domestic eavesdropping powers, while Congress -- by an overwhelming majority -- enacted the Anti-Terrorism and Effective Death Penalty Act of 1996 that severely infringed due process rights, created new Terrorism crimes, and vested the government with a litany of vast new prosecutorial powers -- all galvanized by the McVeigh attack (read more from The New York Times' Linda Greenhouse on how both parties exploited the Oklahoma City bombing to significantly increase the government's surveillance and police powers).

Obviously, the McVeigh attack was not of the same magnitude as the 9/11 attack (which was bolstered by the subsequent anthrax attack), so it did not generate the same degree of Security State extremism.  But the disparate reactions evident here reflect the radically different approaches Norway and the U.S. take -- in general -- with regard to thinking about and responding to security threats and whether liberty and privacy should be sacrificed.