Sexual politics are played for laughs, but death hovers as a remarkable final season continues 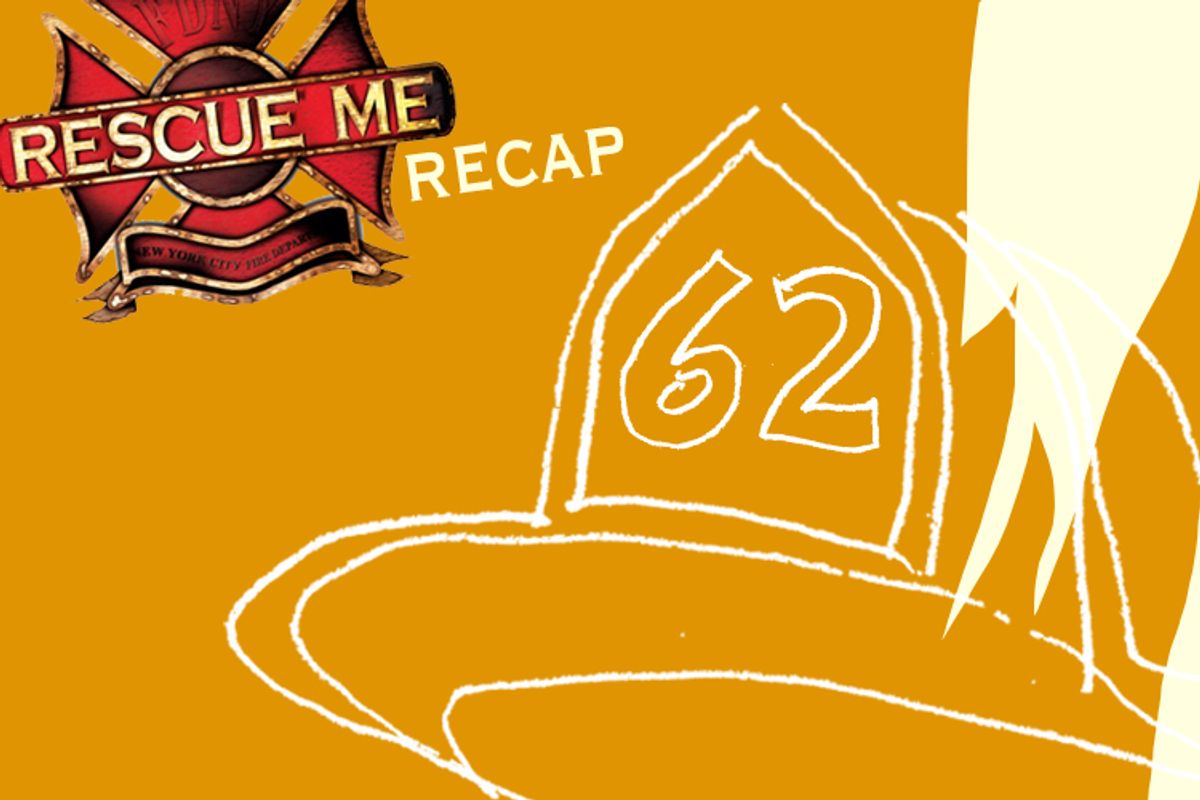 Men are from Mars, women are from Venus -- and when they talk on the phone, they're divorced by a split-screen. We learned this from 1960s-era romantic comedies, and "Rescue Me," of all the damned shows in creation, reminded us yet again in last night's episode, "Press." Andrea warning Tommy not to come home too early, Colleen pouring liquid bubblegum into the anxious Shawn's ear as they planned their wedding -- these conversations and others were separated by an actual, graphic divide, a sharp black line bisecting the screen and putting the men and women into actual, observable boxes.

It was a good, jokey way to represent the show's sexual politics, which more than any other element seemed defined by the standup comedy traditions that forged star and co-producer Denis Leary. ("Women, can't live with 'em, can't shoot em -- but seriously, folks, I love women! Let's have a big round of applause for the ladies in the house.") It was also unsettling. The more sensitive and caring these guys become, the more emasculated they seem, like big, hairy plush toys. In his wedding-planning conversation with his fiancee, Shawn paces as nervously as a little kid who has to use the bathroom but is afraid to tell mommy because he should have gone before they left the house. ("Forty-five hundred bucks for a dress?" he growls after talking to a starry-eyed Colleen eyeballing gowns in a bridal shop. "That shit better be made out of crusted diamonds and shit.") And poor Tommy Gavin just looks miserable, like a guy sitting in a doctor's waiting room for news that he just knows will be horrifying.

Speaking of which: Mortality. Purgatory. Hell. Enjoyable and well-written as these first three episodes have been, they have a bit of a Tony Soprano-in-coma-land feeling, as though the series' continual undertow of off-off-Broadway existential theater is finally bubbling up and becoming explicit. (We're seeing a roll call of dearly departed characters, the "Rescue Me" version of that mini-montage in the credits of season 5 of "The Wire" reminding us of all the great supporting characters who'd gotten killed over the years.) The relative peace and quiet in these first three episodes feels like a classic "Rescue Me" rope-a-dope strategy. Like a horror movie lulling the audience with banter and slapstick and then bringing out the "Scream" killer in the robe and mask, this series has often settled into relationship comedy mode just long enough to haul the Anvil of Tragedy high up above the proscenium arch and swing it into position over some unsuspecting sap's head.

Which character(s) will get flattened? Well, there's cancer-stricken tough-angel Kelly -- why bring her onto the show in a head scarf if not to kill her off? And there's Lt. Kenneth "Lou" Shea, with his compulsive overeating. When Kenny asserted his officer's authority over Franco by crumbling up a donut, dumping the crumbs on the floor and ordering Franco to clean it up, the staging and shooting of the scene had an aspect of blasphemy or violation, a sense that Lou had called down the wrath of the firehouse gods. I love the toughlove speech that Franco gives during the lead-up to that moment -- he's totally right to call bullshit on Lou for not appreciating the guys' participation in his health screening cover-up. And I love Daniel Sunjata's performance, too; he's absolutely killing in his monologues this year, delivering them with a serene swagger that reminds me of a young Burt Lancaster. Maybe they're setting him up for a sudden, horrible death rather than Lou? Would that be very "Rescue Me"?

Or maybe they're all dead already, incinerated in another terrorist attack -- or in the original one that drove, and still drives, most of the action on the series, the hellstorm of 9/11. The episode opens with Tommy staring at a bookstore window, watching a clerk arrange 10th-anniversary-of-9/11 books in a display. "Where were you?" demands a hanging mobile. In his mind, Tommy crashes a truck through the window, pours liquor on the books and torches them with his Zippo, then a cut discloses that it was just a fantasy -- that Tommy is still standing there on the street, gazing mournfully but impotently (there's that word again) like the blue-collar American version of one of the angels in Wim Wenders' "Wings of Desire."

But what if the show is deliberately misleading us, and all the events are heading toward some sort of tortured, conceptual twist ending, like the snowglobe reveal that ended "St. Elsewhere," or the end of "Lost"? Maybe the characters have always been dead.

Nah, that's too undergraduate theater workshop, even even for "Rescue Me." I suspect the death and purgatory references are metaphoric and are there mainly to explore and reveal the show's state of mind, which is pretty cynical, at times nihilistic, and hugely informed by a lapsed Catholic sensibility, that constant back and forth between conditioned belief and embittered, conscious doubt.

"When I was a kid," Kelly tells Tommy in the episode's best scene, "I went to Catholic school. It was very simple. God is good, Satan is evil, and if you obey the Ten Commandments, you go to Heaven. And then when I was pregnant I started to have a little more faith -- just in the world -- that there was something bigger than me. I even started going back to church. And I started picturing my daughter, you know, walking down the aisle in her white dress, making her first communion. But you know how that story ends. You know, when she died, I did talk to the priest. I asked him, you know, why she was taken. He said it was a mystery. it was some big magic show. But at least I didn't have to worry about leaving her behind."

Later in the scene, she tells Tommy that maybe it's easier not to believe in "some great beyond," and that maybe when you die "it just fades to black."

Tommy tells her that he believes in a world beyond this one because he sees the ghosts of dead loved ones, and "sometimes there was something soothing about it, and I liked this idea that they were in this kind of -- I don't know -- this kind of limbo."