The case for raunchy teen lit

A study warns parents about sex in YA novels, but these books can educate -- and spark a passion for reading 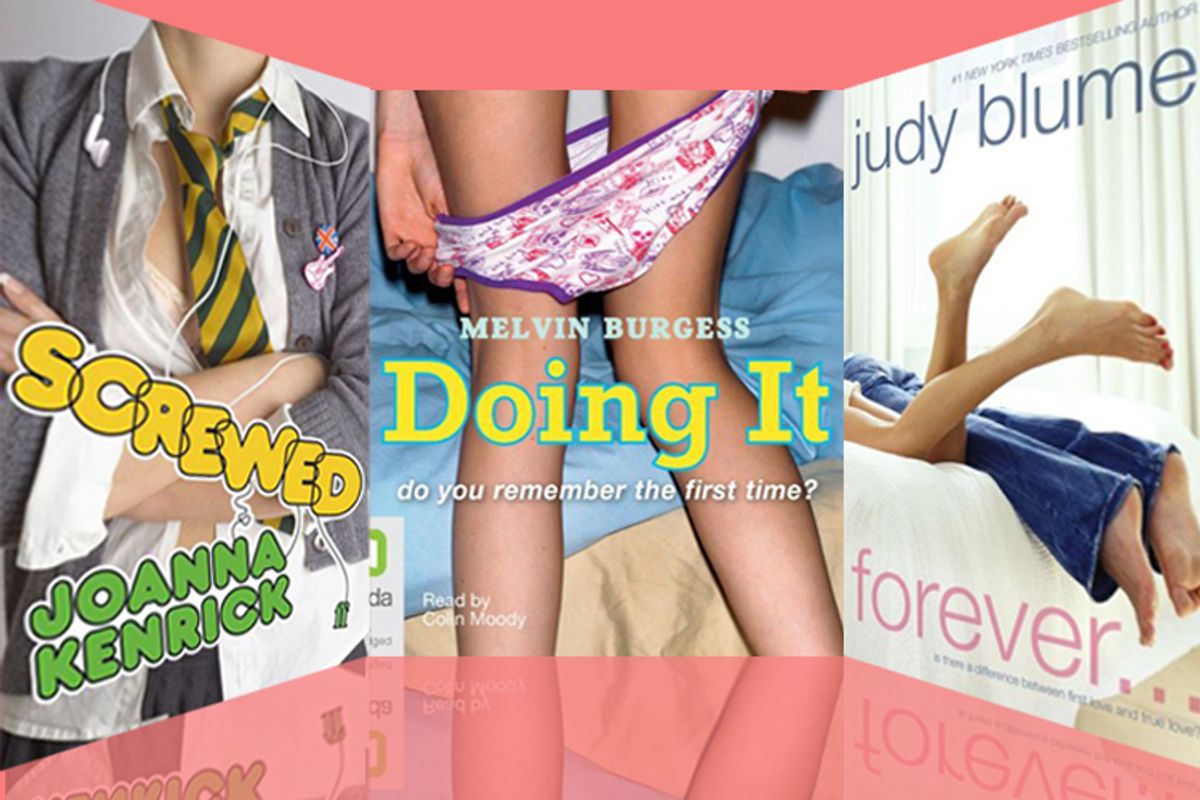 I started out with classics like Nancy Drew and "The Boxcar Children," but at some point in my fledgling reading career I became less interested in fictional young detectives than in solving some mysteries for myself -- namely about sex and romance. Raunchy young adult novels were just the thing to satisfy my curiosity, cement my passion for books and, of course, titillate with descriptions of, oh my God, open-mouthed tongue kissing.

Not everyone shares my gratitude toward the sexy subset of the genre, though. A recent study published in the Journal of Sex Research warned that more than half of popular YA titles include some sexual content, defined as everything from kissing to intercourse. Researchers also noted that 94 percent of sex scenes involved "non-married partners, and over a third of those were non-committal." It's worth noting that the study was conducted by Brigham Young University, which is, ahem, run by the Church of Jesus Christ of Latter-day Saints. The dubious source aside, this is far from the first time concern has been raised over the prevalence of sex in teen reads, which is unfortunate.

Today I would hardly defend the particular visions of sexuality in the books I devoured as an adolescent. Christopher Pike, for instance, liked killing off characters shortly after they lost their virginity. But I was oblivious to the moralistic and outdated messages hidden in some of these stories. By the time I cracked open these edgy books I had already developed my ideas about what it meant to be a boy or girl and what to expect from relationships. I just wanted to know more about what it was like to go on a date, kiss a boy or even to have sex, which seemed then like a scary and mysterious thing (and, who am I kidding, it still does).

In the essay "The Secret Source: Sexually Explicit Young Adult Literature as an Information Source," Amy Pattee, a professor of children's and young adult literature at Simmons College, wrote:

These books aren't a replacement for sex-ed but rather a way to begin exploring what it means to be a sexual being. Kids get to vicariously try on different roles in the safest way possible. A couple of years after I discovered these reads, my family got Internet access at home -- a development that made my investigation much easier, as well as age-inappropriate and potentially dangerous. The fact that the Web has exploded since I was an adolescent makes the concern over edgy literary content seem adorably naive. Parents should be relatively ecstatic if their kids are getting their sexual know-how from books and not XTube.

It isn't just that these novels can give kids a glimpse of a more mature world; they also reflect their actual reality, as good books tend to do. By the time they turn 19, 70 percent of teens will have had sex. More than half of American teens 15 to 19 years old have had oral sex. As Pam B. Cole, author of "Young Adult Literature in the 21st Century," has written, "Sexuality is a huge part of adolescence and drives a great deal of adolescent behavior, any realistic novel about adolescent development that does not include sexuality is incomplete."

Popular YA novels will reflect the world that teens are living in, and that world is undoubtedly imperfect. I wish I had found books as a teen that fully celebrated healthy sexuality -- but, well, I also wish I lived in a culture without massive sex guilt. (I suppose there's the sci-fi/fantasy aisle for that.) But I doubt that unease over the sexiness of the genre has to do with the way sex is presented, as opposed to the fact that it is presented at all.

Heather Corinna, founder of the sex-ed site Scarleteen, wrote me in an email, "Of course, I think some of this, 'OMG, sex is just everywhere, everywhere, everywhere where my children can see it!' stuff from American parents is often really more like, 'Dammit. It's getting harder and harder for me to justify not talking about sex with my kids.'" She adds, "I'm still trying to figure out what kind of parent isn't just freaking happy their kid is reading books at all."