"Attack the Block": Aliens in the hood, London-style

In the painfully hip sci-fi comedy "Attack the Block," only a teen gang stands between England and apocalypse 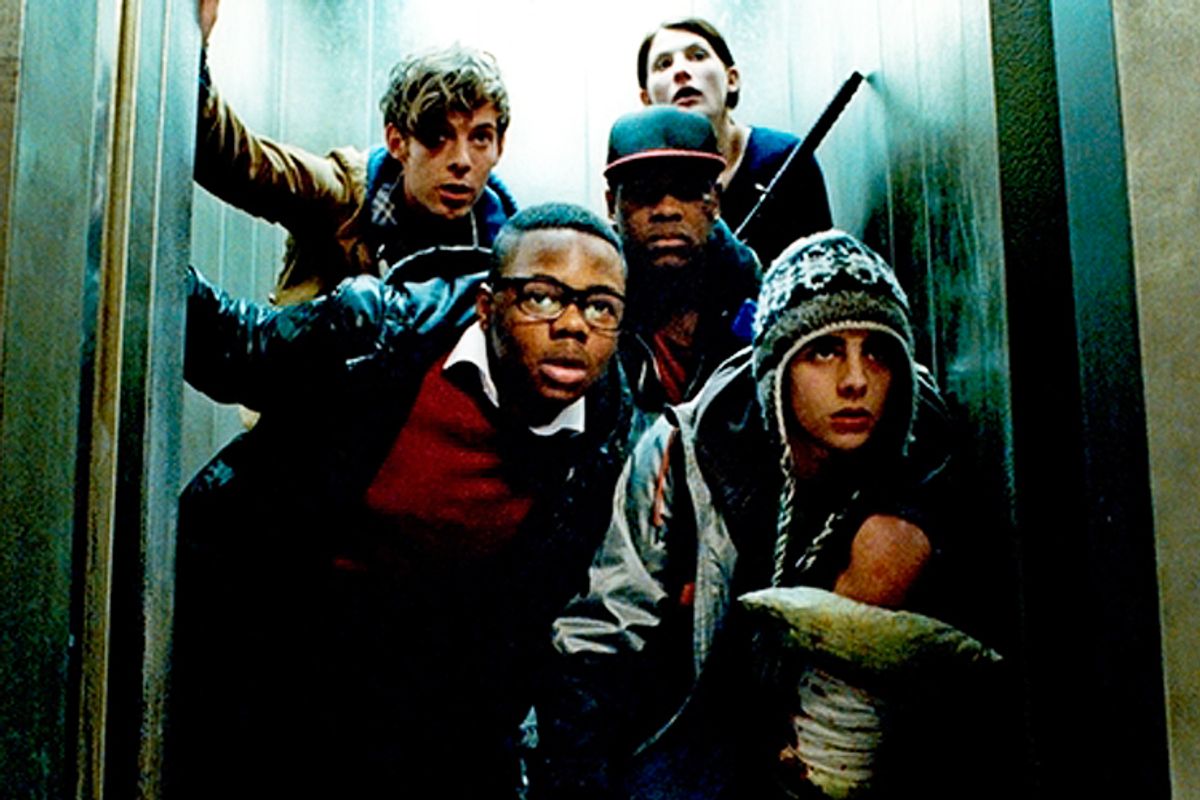 A still from "Attack the Block"
--

First of all, let's ack-cent-choo-ate the positive. "Attack the Block" is a British alien-invasion thriller that ingeniously blends two disparate strains of Anglo cinema, or maybe three: working-class realism, social comedy and science fiction. (Calling all geeks: The main location of this film is called Wyndham Tower, and nearby streets are named Huxley and Moore. Discuss.) Ink-black, gorilla-like creatures from outer space descend on a South London "council estate" (aka housing project), which must be defended by a plucky, multi-ethnic crew of its youthful residents, who might hitherto be described as muggers, drug dealers and hoodlums. In fact, I would argue that the snarling alien monsters are a ginormous MacGuffin for first-time writer-director Joe Cornish, whose real agenda is forcing us to shift perspective on the teen gang members, who at first appear threatening and then band together with a woman they robbed a few hours earlier. They are meant, as the movie's denouement makes rather too clear, to represent a new multicultural, globalized version of Britishness.

At the risk of sounding stodgy and moralistic, I felt ideologically bullied by this aspect of "Attack the Block," and spent much of the movie actively hoping that Moses (impressive teen actor John Boyega), the gang's stone-faced leader, would get munched by the furry invaders. Moses and his mates mug and terrorize Sam (Jodie Whittaker), a young nurse who's coming home late from work, and then deliver a fatal beatdown to the first invader who plummets from the sky, possibly a female or a juvenile. They've behaved like sadistic creeps not once but twice, and now we're supposed to root for them when the aliens bring it for real? Sorry, guys. You could argue that this is taking a bit of low-budget, John Carpenter-style fun too seriously if the blame-society liberal guilt weren't item No. 1 on Cornish's agenda (as it sometimes is with Carpenter).

I'll stop ranting, especially since other people clearly don't have this reaction to "Attack the Block." Or rather, I'll stop ranting after I say that my problem isn't Cornish's overt political intentions -- I never object to that -- but the fact that he fails to sell them convincingly or package them with enough sweetener. If the movie has been massively overhyped in hipsterish movie-insider circles since playing Sundance and SXSW, that really isn't his fault. And if you're OK with Moses and his junior posse there's a lot of cheerful, anarchic humor to be found here.

Much of the enjoyment in Cornish's script comes from the almost impenetrable Cockney-West Indian-hip-hop lingo spoken by his young characters, which he and the cast apparently worked out together: "I'm shittin' meself, innit, bruv? 'Nat same time -- dis is sick!" The police are the "five-oh" or the "po-po" or, even less appropriately, "the feds." Moses is a fount of stern catchphrases, especially his growled "Allow it," which pretty much means "yes" or "OK" or "word." When someone suggests hiding in "Ron's weed room," Sam the nurse wonders what that is. "It's a big room full of weed," explains Brewis (Luke Treadaway), a middle-class student who hangs out in the block in order to acquire the aforementioned herb. "And it's Ron's."

Ron of the weed room is in fact played by Brit-comedy veteran Nick Frost, which is as close as "Attack the Block" gets to a movie star. Boyega stands out in the crowded cast of teenage newcomers -- many of them recruited from the neighborhood seen in the film -- along with Alex Esmail as a motormouth known as Pest, Leeon Jones as the bespectacled good kid Jerome, and Jumayn Hunter as a genuinely terrifying drug lord named Hi-Hatz. These guys take on the aliens with a mix of improvised weapons, BMX bikes, mopeds and parkour moves, and it's reasonably good fun even if Cornish's action scenes are just above mediocre. As I've made clear, "Attack the Block" hovers in that uneasy zone between eager-beaver likability and trying way too hard to be cool, but it captures its gritty setting with unusual affection. Science-fiction buffs seeking a change of pace and fans of British pop culture shouldn't miss it.