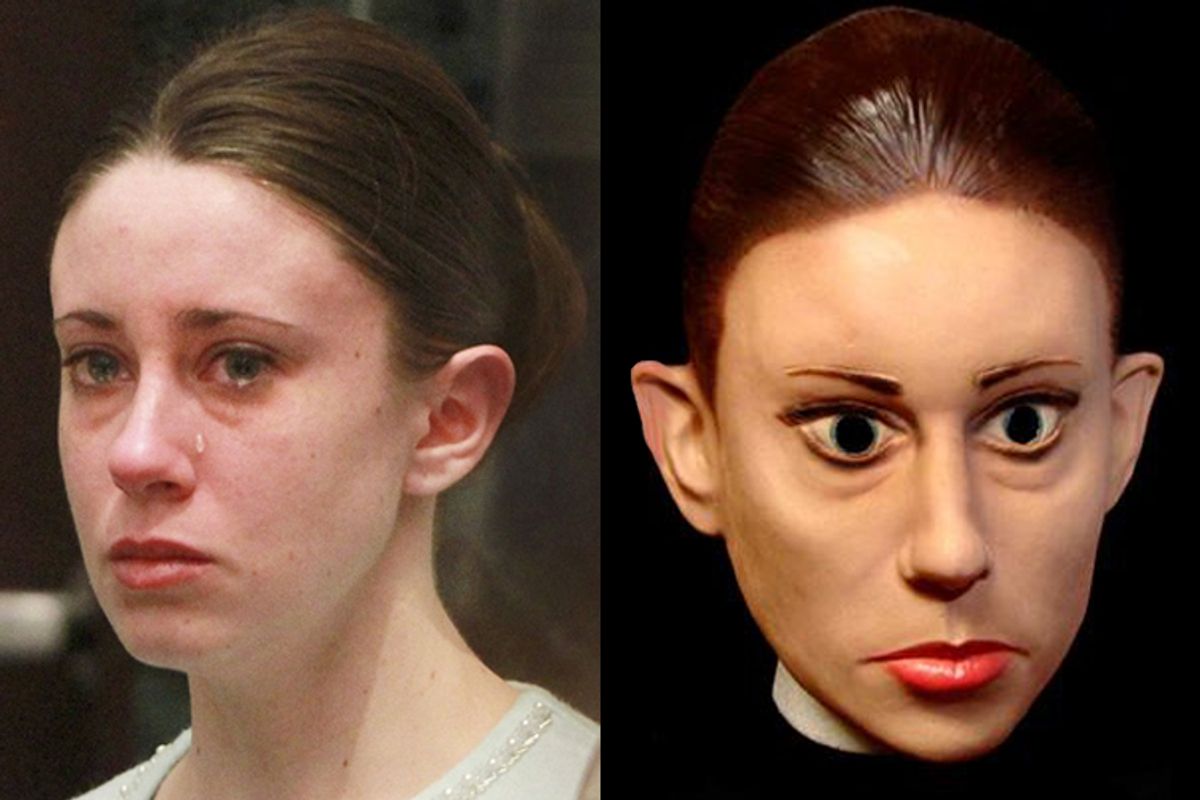 Earlier this month, a jury acquitted Casey Anthony of child abuse and murder in the death of her daughter Caylee, ending a three-year investigation and trial. (Nancy Grace only made it seem like twice as long.) But the fascination with Anthony isn't even close to waning. And now that she's a free woman, her transformation from frightened-looking defendant to cottage industry is in full swing.

It's got be a heartbreaking time for the major news networks. After coming under fire for decimating their news bureaus while giving huge payouts for exclusive interviews, photographs and videos -- including ABC's cool $200,000 to Casey Anthony back in 2008 -- news teams have of late promised to nix the practice (unless they really want to do it). So now they're tripping over themselves to get access to Anthony without appearing to be bankrolling the woman. Earlier this week, NBC firmly denied offering to pay Anthony for an interview -- but did cop to putting up her lawyer Jose Baez in a suite at New York's Mandarin Oriental Hotel, where the going rate is between $1,600 and $2,000 a night. Not too shabby for a network so vehement in its assertion it's not engaging in checkbook journalism.

And Baez isn't the only one enjoying the perks of his client's notoriety. Earlier this week, a seriously creepy mask of Anthony's face cropped up on eBay. A seller in Los Angeles called "propmaster" had this enticing pitch: "Forget Freddy, Jason, Meyers, here's your chance to scare the *#&% out of everyone and win every costume contest with this amazing Tot Mom latex rubber mask, possibly the most frightening mask on the planet." The mask set off a bidding war, and eventually went for a stunning $999,900. Whether the winning bidder can make good on the offer remains to be seen, but two facts remain clear: There are people out there willing to create Casey Anthony masks, and there are people willing to buy them. And sure enough, eBay buyers are already bidding on copycat versions of "the Halloween mask of the year."

Mere weeks after the end of her trial, it would appear the only person not making money off Casey Anthony is Casey Anthony. There are unconfirmed rumors that her team has been shopping around exclusive rights to her first interview, but Anthony has so far been keeping conspicuously, and no doubt wisely, mum.

But she surely knows her moneymaking opportunities are plentiful. The only questions are how much does she want to make and how low does she want to stoop? On Thursday, Hustler kingpin Larry Flynt appeared on Nancy Grace's HLH show to discuss how he's offered Anthony a stunning $500,000 to appear nude in Hustler. He told Grace that his readers have been eager for some unclad Casey. "They said, 'Why haven't you made an offer? Why don't you want to publish her pictures?' They said, 'She's a really attractive person'... You've got men who say, 'Hey, I want to see her in her birthday suit.' There may be some sick individuals ... but that's what life is all about.'" CNN reports that Hugh Hefner says he was similarly deluged with requests to make Anthony an offer, but refused to do it.

Anthony is just the latest in a long line of infamous tabloid stars who've attracted all manner of dubious career opportunities. Vivid's Steve Hirsch has spent the better part of the past two years trying to coax Octomom Nadya Suleman into the adult film business, offering her up to a million bucks to do porn and even stepping in to help her pay her mortgage. And proving that anything even remotely associated with Sarah Palin is pure salacious gold, Levi Johnston's sister just posed for Playboy. What it is about notorious women that creates such bizarre fascination? It's because there's nothing like the public satisfaction of seeing a woman who appears to have transgressed taken down a peg.