The emasculation of the modern vampire?

Would Don Draper really be a better vampire than the men of "True Blood" and "Twilight"? Madness 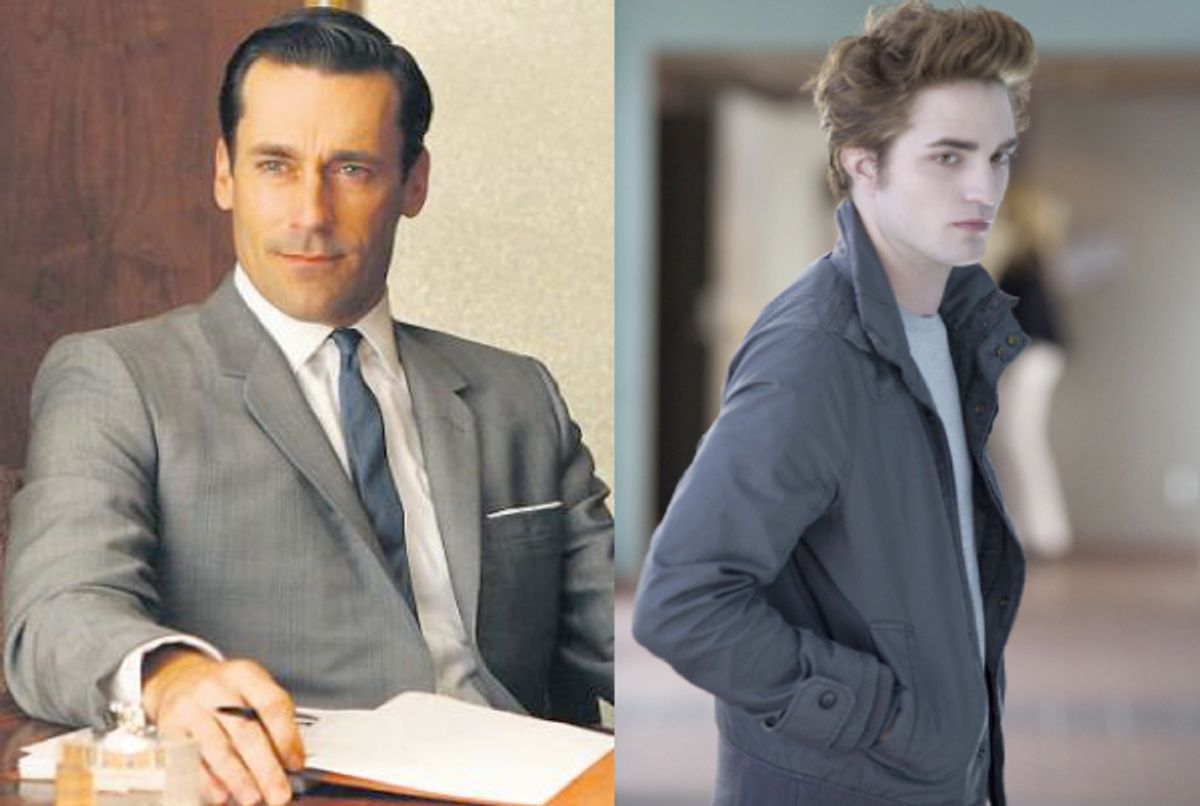 For bloodsuckers, does manliness matter?
--

Screenwriter Brian McGreevy did a guest stint on Vulture today with a diatribe on the emasculation of vampires in modern media, specifically in "True Blood" and "Twilight." "True Blood," at least, began with McGreevy's ideal sexy/dangerous vampire -- if not in Bill Compton, than in Eric Northman. Of course, now that Eric has lost his memory and Bill is playing at being a prissy little king, it's totally reasonable for McGreevy to assert that these characters "have taken the Romantic vampire and cut off his balls, leaving a pallid emo pansy with the gaseous pretentiousness of a perfume commercial. We are now left with the Castrati vampire."

Unfortunately, this argument smacks of chauvinism. McGreevy (currently adapting Bram Stoker's "Dracula" for the big screen) blames this on a new, dangerous "female gaze" -- as opposed to the misogynistic "male gaze" as defined by feminist film theorist Laura Mulvey in her essay "Visual Pleasure and Narrative Cinema." The female gaze, he suggests, makes these non-threatening vampires "pornography for tweens." When he asserts that "Mad Men's" Don Draper is actually more of a vampire than any of the "True Blood" or "Twilight" characters, what he's saying is that Draper is more of a man.

"It is a killer's heart that is the motive force of masculinity and predation its spirit. This is not to suggest nature is immutable, or that one ought to act in blind obeisance to it, but that 'ought' is not in the vocabulary of want, and choosing is meant to have consequences."

But one could argue that original vamps like Stoker's "Dracula" and Max Schreck's Nosferatu are way more emo than Draper: They both are obsessed and stalkerish with women they like, stay secluded from the rest of society instead of engaging in it, and are ultimately tragic figures because they are so sexy, yet so sad. And if we want to get technical about the timeline, Joseph Sheridan Le Fanu's "Carmilla" actually predates "Dracula" by 25 years, and revolves around lesbian vampires. So maybe that "female gaze" will come in handy after all.

McGreevy is arguing for vampires who are manipulative, coldhearted Patrick Bateman types -- charming sociopaths like the "American Psycho" character who understand the human morality structure and can play the game, but whose nature compels them to kill in order to live.

In that way, maybe there is one television character that would be less of a "Castrati" vamp than Edward Cullen or Bill Compten: Cersai Lannister from "Game of Thrones." That soul-sucking pit of evil puts on a pretty face in public while using her sexuality to stay in power. Her only desire is to protect her progeny; behind closed doors, she engages in incestuous taboos. She knows what's expected of her in public, but could care less once the curtains have drawn. "You win, or you die," says Cersai about the game in question, implying that holding onto power is its own version of immortal life -- and the mark of a true vampire.