Suddenly, all of the pressure is on the two candidates from Minnesota. No wonder it's getting ugly 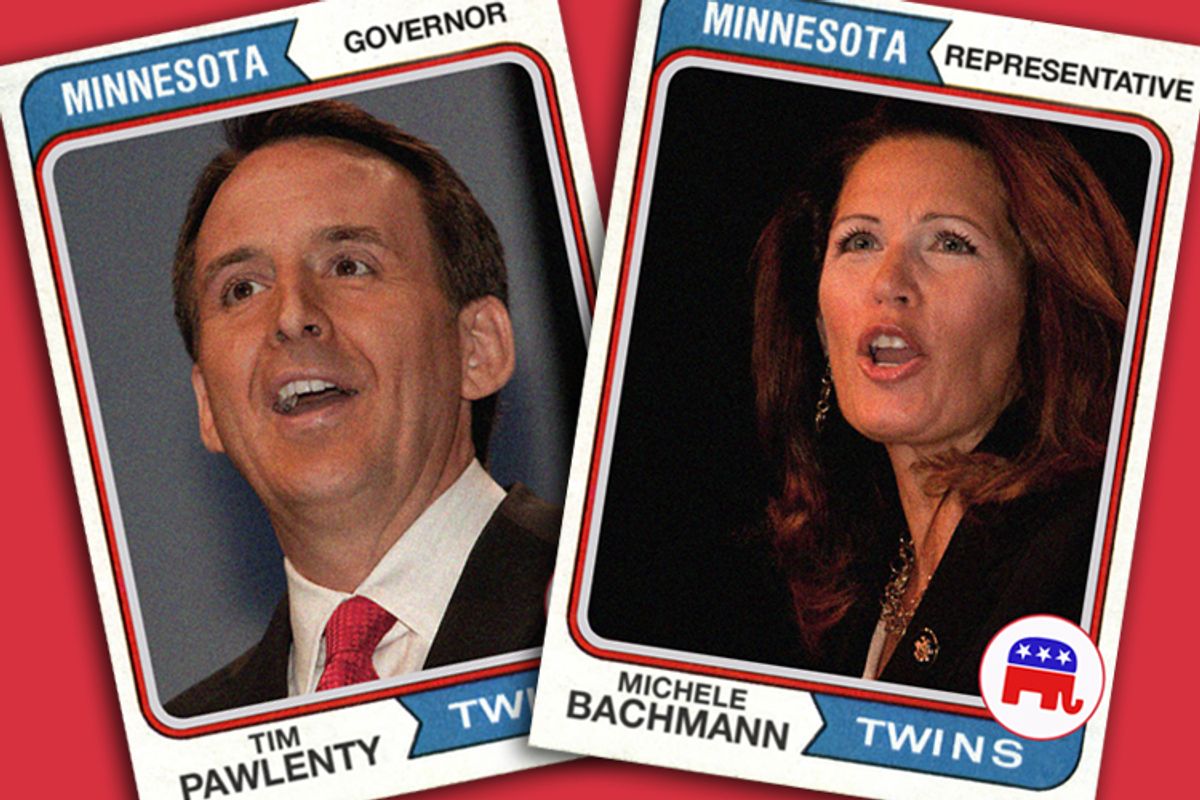 The bickering between the two Minnesota Republicans running for president, former Gov. Tim Pawlenty and Rep. Michele Bachmann, is getting pretty loud and angry. But it’s not surprising. It reflects their different roles in the GOP, and the white-knuckle pressure they both face as the 2012 contest moves toward its first real test in Iowa.

Pawlenty has made his "executive experience" and "results" as governor a centerpiece of his campaign, complemented by his eager adoption of harsh Tea Party stances that seem less than perfectly authentic coming from this mild-mannered Minnesotan. But recently, subthemes critical to his two most prominent rivals have been creeping into his self-laudatory discourse:

Pawlenty’s campaign has sharpened this thinly veiled reference to Bachmann’s jaw-flapping and speechifying and symbolic amendment-offering by comparing it to the record of a certain socialist Muslim in the White House when he began running for president in 2008.

After Pawlenty incautiously piled onto allegations that Bachmann’s migraines might occasionally incapacitate her as president (a comment he soon walked back), something seemed to snap in the Bachmann campaign, which soon released a missive turning the tables on Pawlenty’s innuendoes about their candidate’s similarities to Obama. Here’s a taste of that nastygram:

Governor Pawlenty would have us believe that there is 'very little difference' between his positions and those of Michele Bachmann.

And of course, President Obama would surely applaud Governor Pawlenty’s 2006 statement that the 'era of small government is over,' and that the government will have to be 'more proactive and more aggressive.'

Governor Pawlenty has changed his positions in recent years, but he can’t run from his big government record as governor of Minnesota that left the state’s budget in a multi-billion dollar mess. That’s not executive experience we need.

Ouchy ouchy. Coming from someone (or at least the surrogates of someone) who served in the Minnesota Senate while Pawlenty was a House leader and then governor, Bachmann’s blast has some credibility. Her attack on his fiscal record, moreover, echoes Democratic complaints about his signature accomplishment as governor (balancing the budget without tax increases), and also reflects her role in the Minnesota GOP as an ideological enforcer suspicious of "pragmatic" pols like Pawlenty. She clearly aims to spread those doubts to hardcore conservatives -- who cannot help but view Bachmann as one of their own -- in Iowa and elsewhere.

It must seem unfair to Pawlenty -- who in another fine touch of irony, is reprising Mitt Romney’s 2008 strategy of aping every scrap of right-wing rhetoric available -- to discover he is still subject to attacks as some sort of RINO. But that’s how fast the national GOP has moved to the right. No matter how hard he tries to pose as a True Conservative, there is a Truer Conservative position available.

Both Pawlenty and Bachmann, for example, are denouncing efforts to reach some bipartisan agreement on a debt ceiling increase. Both signed the Cut, Cap, and Balance pledge that virtually rules out an agreement. But Bachmann has managed to get to Pawlenty’s right by demanding a total repeal of ObamaCare in addition to the CCB litmus test before she will countenance any bipartisan fiscal agreement on any conceivable subject. Similarly, both candidates signed a pledge (which Mitt Romney, Herman Cain and Jon Huntsman refused to sign) proferred by the upstart radical anti-choice group the Susan B. Anthony List promising to pursue national restrictions similar to the bans on abortions prior to 20 weeks being enacted by several states and a ban on any federal funding for any institution -- including hospitals -- performing entirely legal abortions. But Bachmann again got to Pawlenty's right on social issues by signing the Iowa-based Family Leader's "marriage vow" committing the candidate to fight not only for an end to same-sex marriages but for restrictive divorce laws and bans on porn.

With all the Iowa campaigns in a teeth-grinding frenzy in the run-up to the Iowa GOP’s straw poll in Ames on Aug. 13, these sort of fine distinctions matter to the conservative activists most avid to participate in that event and the caucuses themselves. Pawlenty is currently fighting for his political life in Iowa, while Bachmann is fighting to hold onto the Iowa front-runner status -- and the high expectations associated with it. Adding to the pressure is the highly likely entry into the race at some point in August of Texas Gov. Rick Perry, who represents a deadly threat to Bachmann's hold on Christian right and Tea Party activists, and a direct challenge to Pawlenty’s once-formidable claim to be the only electable conservative alternative to Mitt Romney. It has to be especially galling to Pawlenty to watch Perry effortlessly leap to double-digit standing in national GOP polls without taking even the first formal steps toward a candidacy, even as the Minnesotan continues to craw along in the low single-digits after months of frantic campaigning.

So it’s crunch time for Pawlenty and Bachmann, and their old rivalry back home is likely to get even more vicious before the deal goes down in Ames.