The debt ceiling solution that Obama dares not mention -- yet

He's still talking compromise and bipartisanship, but the 14th Amendment really may be the only way out of this 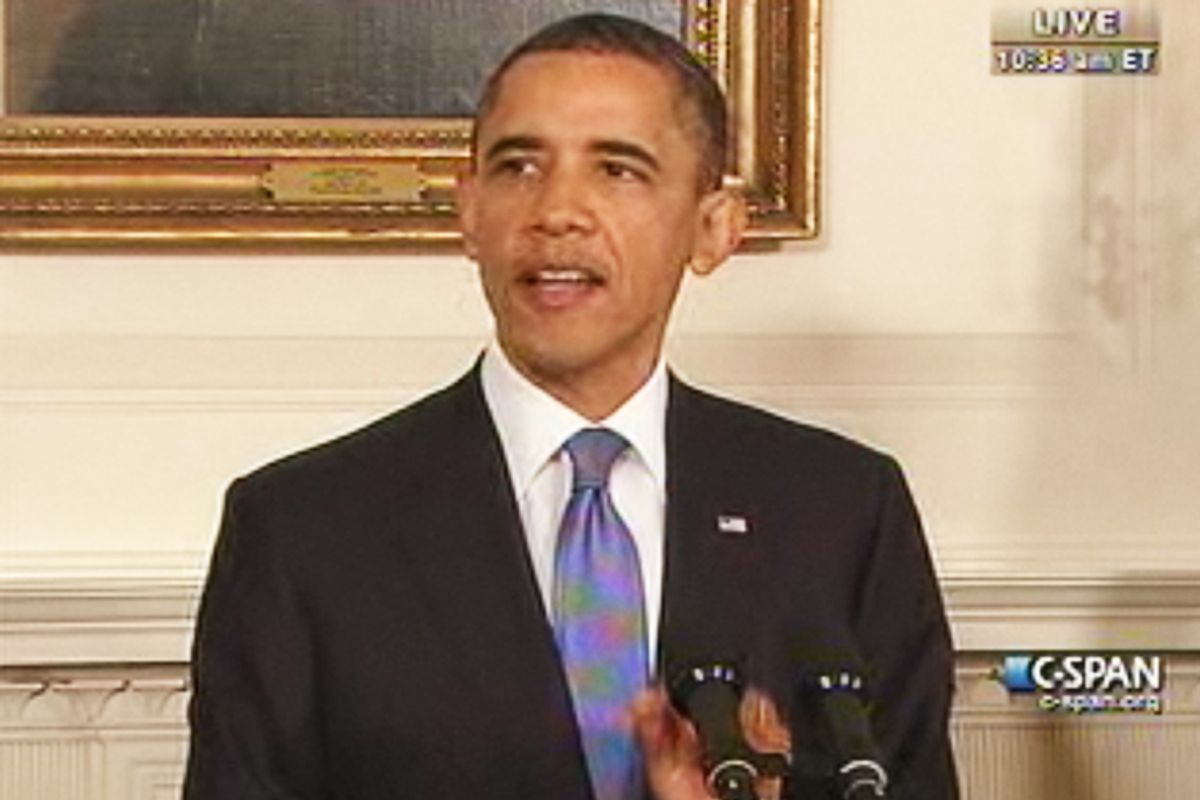 Maybe President Obama went to sleep early and missed the insanity that played out on Capitol Hill on Thursday night. That's one way to make sense of the remarks he made to the press at the White House late Friday morning.

Hours after House GOP leaders were forced to put off a vote on their own debt ceiling bill because it still wasn't pure enough for the true believers in their conference, Obama issued yet another call for Congress to enact a bipartisan plan to cut spending and raise the debt ceiling before next Tuesday.

"There are multiple ways to solve this problem," the president said, adding that "this is not a situation where the two parties are miles apart."

From a rational standpoint, he's right. The main difference between the plan that Harry Reid has introduced in the Senate (and that Obama has endorsed) and the one that the House GOP wanted to pass on Thursday night is over duration. The Democratic plan would put off the next extension showdown until after the November 2012 election; the GOP plan would force another one a few months from now. Given the potentially catastrophic effects of a default, it shouldn't be too hard to bridge this divide.

But this impasse really has nothing to do with rational thinking. It is about a band of GOP House members who embody their party base's knee-jerk resistance to and resentment of Obama -- and that base's conviction that most of America's problems stem from the willingness of recent Republican leaders to compromise too easily. And it's about a Republican House speaker, John Boehner, who is essentially powerless to persuade them to give an inch -- and who flirts with a coup by even talking about compromise.

So it really doesn't matter that, in practical policy terms, the two parties aren't miles apart. The bottom line is that the House is controlled by Republicans who believe that anything short of their own "Cut, Cap and Balance" program -- a draconian measure that has zero chance of ever being enacted as long as Democrats control the Senate and/or the White House -- is a sellout. In fact, the word is that House GOP leaders, in order to finally unify their conference, are now making their plan even more conservative, by making any further extension of the debt ceiling after this contingent on a Balanced Budget Amendment clearing both the House and the Senate.

If this is the direction the House GOP is now going, it's really impossible to imagine a bipartisan solution being forged. Let's say Boehner adds a BBA provision and is finally able to clear his bill through the House. Then what? The Senate was already dead set against his plan because of its call for a short-term extension. Now that same plan would condition a short-term extension on congressional approval of a constitutional amendment that has no chance of securing the super-majorities it would need in either chamber?

So, obviously, the House plan would not make it through the Senate. But let's say Majority Leader Reid and his fellow Democrats amend the Boehner plan, in a way that strips out the BBA language and provides for a longer-term extension. Heck, let's go crazy and say Reid does this with support from Republicans in the Senate, some of whom seem just as fed up as Democrats with all of this nonsense. But even this doesn't get us anywhere, because the amended version would then go back to the House. And if the House GOP wasn't prepared to accept Boehner's plan on Thursday night, God only knows what they'd make of the Senate's offer. Sure, Boehner could potentially go around the true believers and rely on Democratic votes to pass it -- then immediately face that coup he's been trying to avoid since he became speaker.

Obama didn't dare mention it Friday morning, but the "constitutional option" is now looming larger than ever. The idea is that Obama, it it comes to it, can invoke the 14th Amendment, which requires that the United States honor its debt, and simply ignore the debt ceiling. Obviously, doing so would come with all sorts of unpredictable legal, constitutional and political ramifications. And, as Andrew Leonard pointed out earlier this week, even doing this might not be enough to prevent a credit downgrade.

But the case for trying is getting stronger, if only because the prospect of a bipartisan compromise before Tuesday is dimmer than ever. Two of the top three Democrats in the House -- Minority Whip Steny Hoyer and Caucus Chairman James Clyburn -- have now both suggested that Obama at least consider it, if need be. So has Bill Clinton. And given that any plan that could even possibly get through Congress will feature spending cuts that could make the stalled economy even worse, there's a solid case that the 14th Amendment is worth invoking simply to spare the country more pain.

It's understandable why Obama is trying to play the Great Conciliator. To judge from polls, he's come off better than any of the other major D.C. players during this fight, although that's hardly saying much. But if this weekend comes and goes and the prospect of a compromise is as bleak -- or bleaker -- than it now is, he may end up the country's last line of defense against a default.