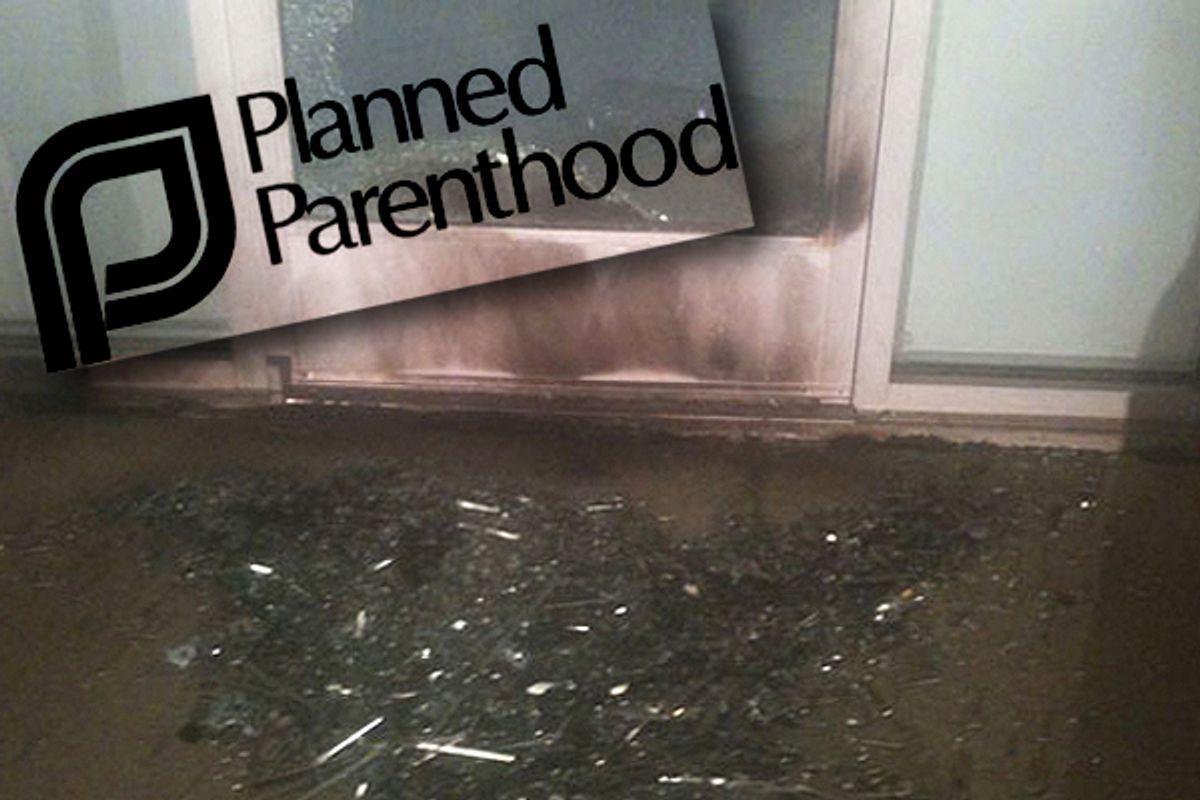 Someone firebombed a Planned Parenthood clinic in McKinney, Texas, late Tuesday night. Because it was so late, no one was hurt. The clinic doesn't provide abortions, but there had been protesters there earlier that day anyway. You might've read about the news on Twitter or on a liberal blog. Probably not in a newspaper or on a cable new channel. Definitely not at any right-wing blogs. Which is a bit odd, actually, considering how much attention terrorist attacks generally get in this country.

Oh, sorry, how much attention possible Islamic terrorist attacks get.

Planned Parenthood, in case you haven't been paying attention, has been the focus of a flood of political attacks -- both rhetorical and legislative -- since approximately the minute the Republicans who were elected in 2010 took office across the nation. James O'Keefe shopped around one of his trademark shamelessly misleading video "stings." Glenn Beck devoted an hour to falsely accusing Planned Parenthood of various heinous crimes. The major right-wing pundits have stepped up the hysterical anti-reproductive rights rhetoric as multiple states attempted to defund the organization. The right has even moved on to attacking contraception, as if it doesn't even want people to believe that its goal isn't to control women's bodies.

The National Review's the Corner has run multiple posts on some pro-life "study" accusing Planned Parenthood of "systemic, organization-wide fraud and abuse" and even human trafficking "at this federally funded billion-dollar abortion business." One of them said, "Where is the Media," and bemoaned the fact that the mainstream press was supposedly "ignoring" the report, which got a major press conference with multiple members of Congress and coverage in Politico and the Hill.

But, weirdly, this Planned Parenthood news has not been mentioned at the National Review.

It's easy to imagine that if the target of the attack had been associated with the right -- Marcus Bachmann's clinic, maybe? -- this would be a major national story, even if no one was hurt and the attacker's identity was still unknown.

It's even easier to imagine that if anyone had any reason to suspect that a Muslim did this, that it'd be not just a major national story but also the subject of congressional inquiries and maybe eventually an air war. (Even failed Islamic terrorists are treated as if they succeeded by politicians, these days.)

We obviously don't know yet, but this attack seems more likely to be the work of a politically motivated person with conservative beliefs than a random act of vandalism. In other words, domestic terrorism. Someone threw a Molotov cocktail at a women's health clinic. It's insane that only a couple of Internet feminists actually seem to care.