The art of canning grape leaves 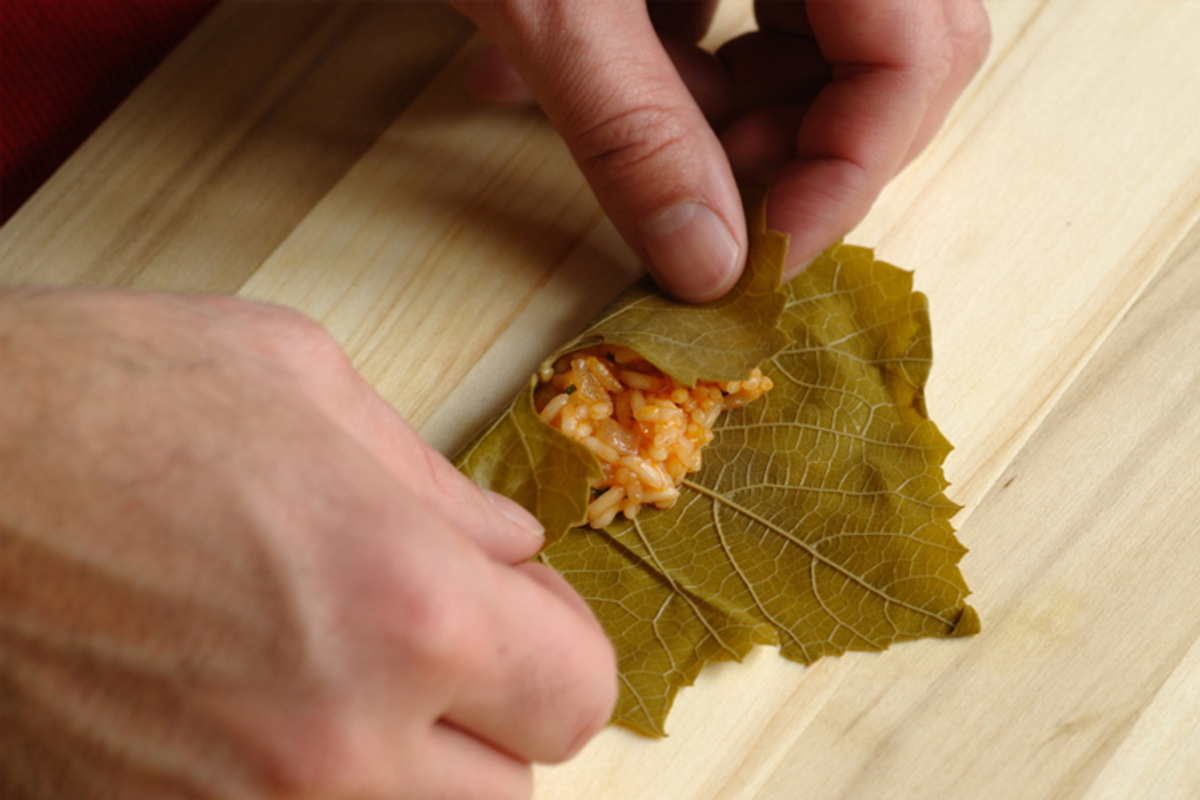 Back in the 1970s, my mother and father were living the dream. They moved "back to the land," built a cabin and started wearing overalls. I can't think about my upbringing without thinking of the Canned Heat song "Going Up the Country": When I was growing up, the holding tank for our water system was a scavenged wine barrel. Our water really did taste like wine.

My parents weren't the only ones around who stole their cues from the furry freak brothers: By 1975, Deadwood, Ore., was flooded with hippies. Like bra burning and eschewing marriage, moving to the woods was a statement of dissatisfaction with societal norms. Turn on, tune in, drop out.

Deadwood has seen a lot of idealists come and go. The ones who hung on are a far cry from the bearded kids at Woodstock. Over the years they've become country people, marked by pragmatism and a keen talent for splitting wood. Your average Deadwoodian has a giant garden, cooks from scratch and is an ace at preserving food. Quite a few hunt or raise livestock.

Though I grew up here in Deadwood, 17 years of city living made me soft. My first year back in the country as an adult has taught me a healthy respect for anyone who can, say, fix a pump or grow a tomato the size of a softball. I have a lot to learn from my neighbors. Which brings me to the subject of my friend Michelle, who moved to Deadwood 34 years ago and is still going strong.

If I were an 80-year-old man I might describe Michelle Holman as a firecracker, if I were to slip into the parlance of the 1980s, she'd be a righteous babe, and if you want a journalistic cliché, we'll go with feisty. She's all wiry strength and dark accents: long curly hair and large flashing eyes and eyebrows capable of gymnastic feats (when I was a little girl I so admired Michelle's skill at raising one eyebrow that I used to practice in front of the mirror).

When my mother and I arrive in Michelle's spacious and homey kitchen, we find her sorting a giant pile of grape leaves. Dance hall reggae blares from the stereo. (I think it's dance hall reggae, anyway. As more of a classic country fan, I'm not exactly an expert on the genre.) The sound is aggressive and bouncy, much like its listener. My mother looks like she's about to have an aneurysm every time the singer starts rapping, so Michelle perceptively switches to something more in my mother's field of tolerance: Brazilian soul.

This afternoon we will be canning grape leaves which Michelle has scavenged from a neighbor's arbor. Although Michelle is a master of home-canning, this is only her third batch of grape leaves. "It just occurred to me if they can put it in a bottle, why can't I?" she says, cocking her head. Indeed. Michelle's recipe is adapted from Linda Ziedrich's "The Joy of Pickling." To prepare, we snip the stems from the leaves with scissors.

As we work, we have a conversation that has echoed around the gathering, preparing and preserving of food for millennia: We share concern for friends who are sick, we parse various relationships, we remember the dead.

When all the stems are snipped, we separate the leaves into groups of 36. Michelle is heating three pots of water: one pot to sterilize the canning jars (which she is reusing), one pot to blanch the grape leaves and one pot to heat a cup of water, lemon juice and salt, which we'll pour into the jars over the grape leaves. Michelle's movements are efficient and energetic, but not at all harried.

I'm envious -- my solo experiences with canning involve a lot of flustered cursing. When I ask Michelle for general advice to the canning novice, she says, "The first rule of thumb is to be passionate about what you do. Because when you love it, it's just a joy. And as much work as it is, it feels effortless. I mean I'm partying in here. At the end, I've got the jars out and I'm looking at them -- that is sheer beauty. It's temporal art, man."

Michelle's two-room pantry is a thing of beauty to be sure -- floor to ceiling, shiny glass jars are stacked: red, green, yellow, gold, fuchsia and ochre. Michelle has been canning vegetables from her garden for 25 years, but in the last few years she's branched out into canning soups as well: roasted vegetable, Mediterranean beet, Thai vegetable curry. She emphasizes that the process is creative: "I never really know what I'm going to do until the point when I start cooking."

Like many an artist, Michelle is squirrelly about the details. I've eaten her delicious dolmas and I want the recipe for our readers, but it takes some weaseling. It's not that Michelle is protective of her secrets so much as she doesn't think of food in terms of measurements: Her recipe begins: "OK, so you take some cooked rice ... "

"However much you want, Chic."

"Hypothetically how much rice would be good?"

She rolls her eyes. Clearly we've hit a wall. I retreat and regroup. Michelle dunks the first batch of grape leaves in boiling water for 30 seconds or so and removes the dripping leaves to a bowl of ice water. We're ready to roll. Michelle fishes for iced grape leaves until she has a pile of six. She starts with the bottom leaf, rolling it from left to right with a deft movement. Rolled together, the leaves now look like a cigar. She stuffs the roll into a waiting jar. I set up camp on the other end of the cutting board and get to work. The blanched grape leaves have the consistency of wet silk, and the process is mindless enough to allow for spirited conversation.

When every jar has six cigar rolls, we add ½ teaspoon of salt to each, followed by the mixture of hot water and lemon juice. While Michelle is busy screwing down the lids and putting the jars in their hot-water bath, I manage to extract the rest of her dolma recipe as well as a recipe for tzatziki sauce, which I remember as the best I've ever tasted. "Making tzatziki is so easy," Michelle says, adding, "And you don't want to buy it because it's so much money for just a little thing."

By the time the jars are sealed in their hot-water bath, we've covered a lot of ground: We've set food away for winter, we've caught up on old friends, we've swapped a little gossip, I've heard a few good stories, and I've learned a thing or two about canning. As I listen to Michelle and my mother laugh, I am struck by the thought that although my mother and Michelle are still self-proclaimed radicals, they now have a hell of a lot in common with your average country person of any political stripe. Of the many paths the hippie generation encountered, at least one led back to ancient tradition.

Note: As I mentioned, Michelle was hard to pin down on exact quantities, but she did allow that the rice/vegetable ratio should be about even. I haven't tried either recipe yet, but I've tried Michelle's dolmas and I can attest to their tastiness. Her tzatziki sauce is superlative.