Democratic politics in a nutshell 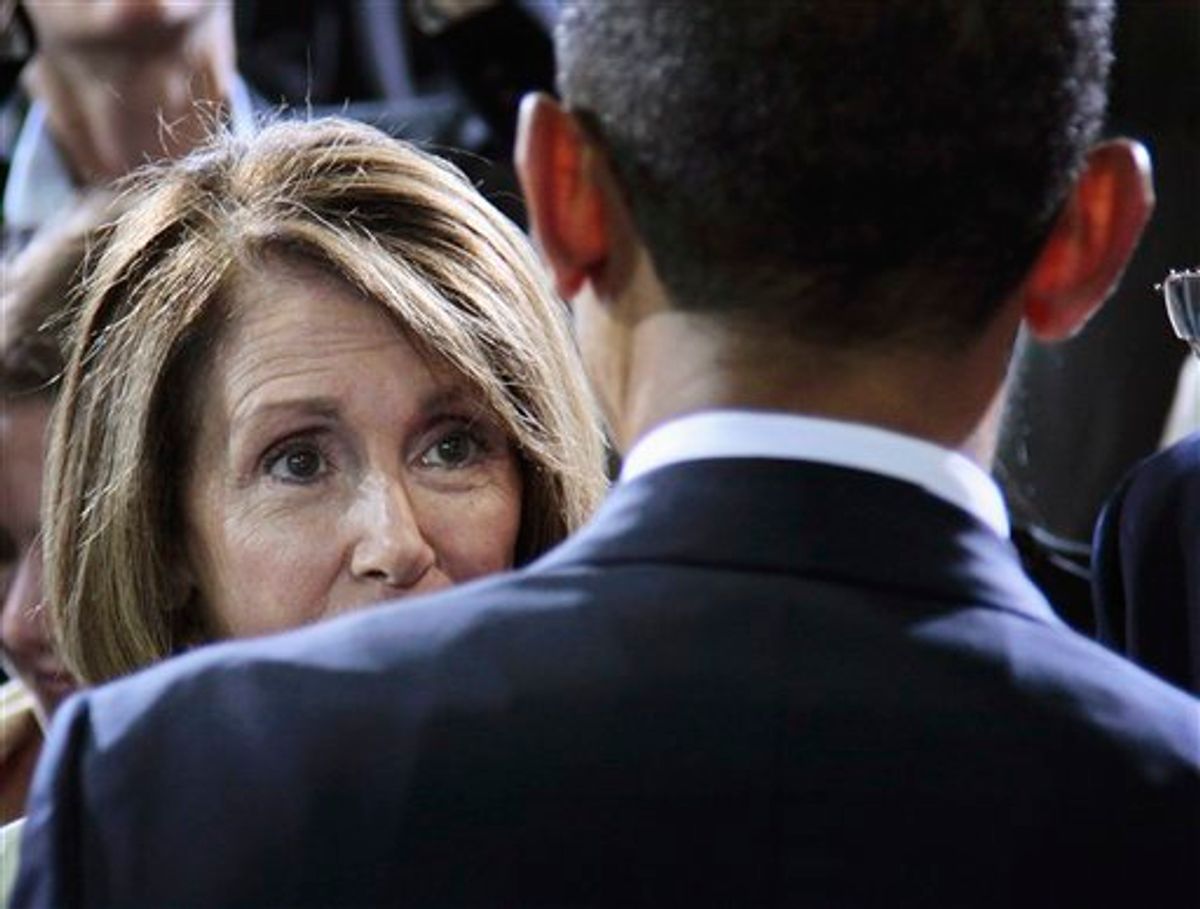 (1) Three days ago, Democratic Rep. John Conyers, appearing at a meeting of the Out of Poverty caucus, said: "The Republicans -- Speaker Boehner or Majority Leader Cantor -- did not call for Social Security cuts in the budget deal.  The President of the United States called for that" (video here, at 1:30);

(2) The reported deal on the debt ceiling is so completely one-sided -- brutal domestic cuts with no tax increases on the rich and the likelihood of serious entitlement cuts in six months with a "Super Congressional" deficit commission -- that even Howard Kurtz was able to observe: "If there are $3 trillion in cuts and no tax hikes, Obama will have to explain how it is that the Republicans got 98 pct. of what they wanted," while Grover Norquist, the Right of the Right on such matters, happily proclaimed: "Sounds like a budget deal with real savings and no tax hikes is a go."

(3) The same White House behavior shaping the debt deal -- full embrace of GOP policies and (in the case of Social Security cuts) going beyond that -- has been evident in most policy realms from the start.  It first manifested in the context of Obama's adoption of the Bush/Cheney approach to the war on civil liberties and Terrorism, which is why civil libertarians were the first to object so vocally and continuously to the Obama presidency, culminating in this amazing event from mid-2010: "Speaking at a conference of liberal activists Wednesday morning, ACLU Executive Director Anthony Romero didn't mince his words about the administration's handling of civil liberties issues. 'I'm going to start provocatively . . .  I'm disgusted with this president,' Romero told the America's Future Now breakout session."

In other words, a slew of millionaire politicians who spent the last decade exploding the national debt with Endless War, a sprawling Surveillance State, and tax cuts for the rich are now imposing extreme suffering on the already-suffering ordinary citizenry, all at the direction of their plutocratic overlords, who are prospering more than ever and will sacrifice virtually nothing under this deal (despite their responsibility for the 2008 financial collapse that continues to spawn economic misery).  And all of this will be justified by these politicians and their millionaire media mouthpieces with the obscenely deceitful slogans of "shared sacrifice" and "balanced debt reduction" -- two of the most odiously Orwellian phrases since "Look Forward, not Backward" and "2009 Nobel Peace Prize laureate" (and anyone claiming that Obama was involuntarily forced by the "crazy" Tea Party into massive budget cuts at a time of almost 10% unemployment: see the actual facts here).

With those fact assembled, this morning's New York Times article -- headlined: "Rightward Tilt Leaves Obama With Party Rift" -- supplies the perfect primer for understanding Democratic Party politics. The article explains that "Mr. Obama, seeking to appeal to the broad swath of independent voters, has adopted the Republicans' language and in some cases their policies," and then lists numerous examples just from the debt debate alone  (never mind all the other areas where he's done the same):

No matter how the immediate issue is resolved, Mr. Obama, in his failed effort for greater deficit reduction, has put on the table far more in reductions for future years' spending, including Medicare, Medicaid and Social Security, than he did in new revenue from the wealthy and corporations. He proposed fewer cuts in military spending and more in health care than a bipartisan Senate group that includes one of the chamber's most conservative Republicans. . . .

But by this month, in ultimately unsuccessful talks with Speaker John A. Boehner, Mr. Obama tentatively agreed to a plan that was farther to the right than that of the majority of the fiscal commission and a bipartisan group of senators, the so-called Gang of Six. It also included a slow rise in the Medicare eligibility age to 67 from 65, and, after 2015, a change in the formula for Social Security cost-of-living adjustments long sought by economists.

How can the leader of the Democratic Party wage an all-out war on the ostensible core beliefs of the Party's voters in this manner and expect not just to survive, but thrive politically?  Democratic Party functionaries are not shy about saying exactly what they're thinking in this regard:

Mark Mellman, a Democratic pollster, said polling data showed that at this point in his term, Mr. Obama, compared with past Democratic presidents, was doing as well or better with Democratic voters. "Whatever qualms or questions they may have about this policy or that policy, at the end of the day the one thing they're absolutely certain of -- they're going to hate these Republican candidates," Mr. Mellman said. "So I'm not honestly all that worried about a solid or enthusiastic base.”

In other words: it makes no difference to us how much we stomp on liberals' beliefs or how much they squawk, because we'll just wave around enough pictures of Michele Bachmann and scare them into unconditional submission. That's the Democratic Party's core calculation: from "hope" in 2008 to a rank fear-mongering campaign in 2012.  Will it work?  The ones who will determine if it will are the intended victims of that tactic: angry, impotent liberals whom the White House expects will snap dutifully into line no matter what else happens (even, as seems likely, massive Social Security and Medicare cuts) between now and next November.