The myth of Obama's "blunders" and "weakness"

Even when the President repeatedly says he wants severe budget cuts, many refuse to believe him 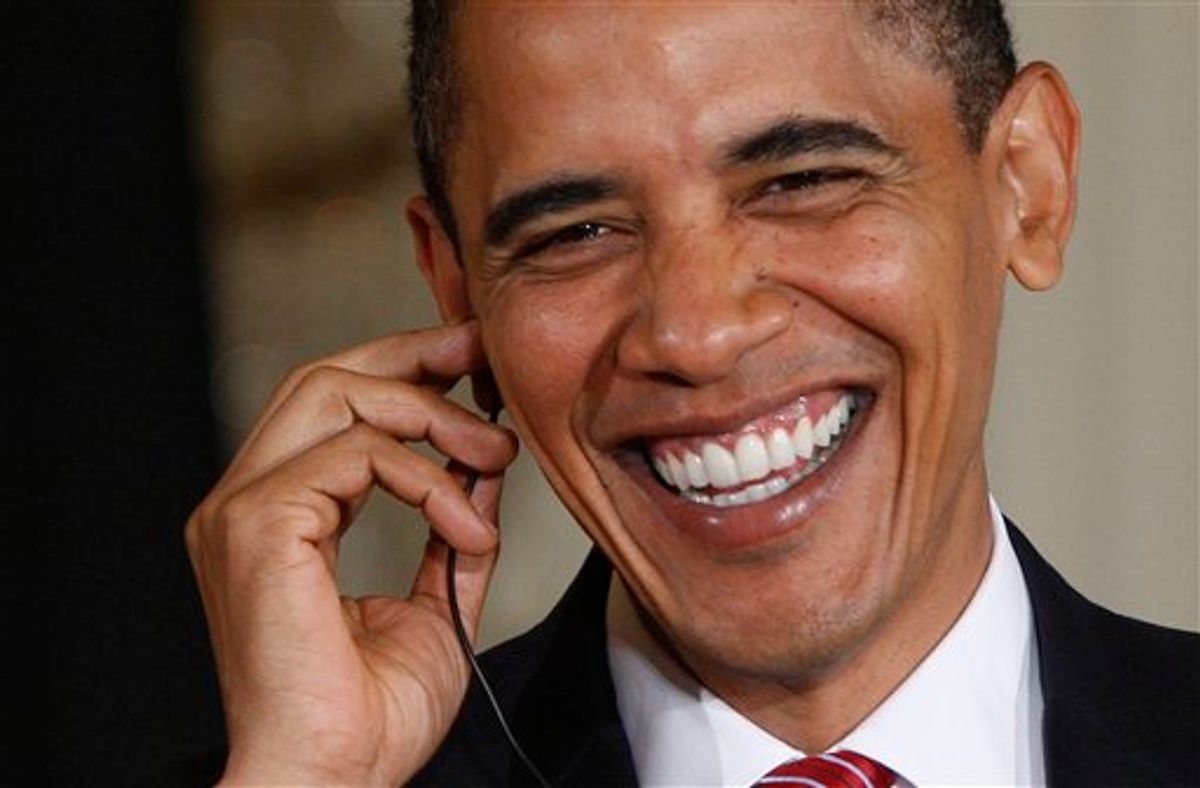 FILE - In this June 26, 2009, file photo President Barack Obama smiles as he and German Chancellor Angela Merkel, not shown, participate in a joint news conference in the East Room of the White House in Washington. Turning 50 is hard enough. But it's got to be even harder when you're president, because the whole world knows about it. (AP Photo/Ron Edmonds, File) (AP)
--

With the details of the pending debt deal now emerging (and for a very good explanation of the key terms, see this post by former Biden economic adviser Jared Bernstein), a consensus is solidifying that (1) this is a virtually full-scale victory for the GOP and defeat for the President (who all along insisted on a "balanced" approach that included tax increases), but  (2) the President, as usual, was too weak in standing up to right-wing intransigence -- or simply had no options given their willingness to allow default -- and was thus forced into this deal against his will.  This depiction of Obama as occupying a largely powerless, toothless office incapable of standing up to Congress -- or, at best, that the bad outcome happened because he's just a weak negotiator who "blundered" -- is the one that is invariably trotted out to explain away most of the bad things he does.

It appears to be true that the President wanted tax revenues to be part of this deal.  But it is absolutely false that he did not want these brutal budget cuts and was simply forced -- either by his own strategic "blunders" or the "weakness" of his office -- into accepting them.  The evidence is overwhelming that Obama has long wanted exactly what he got: these severe domestic budget cuts and even ones well beyond these, including Social Security and Medicare, which he is likely to get with the Super-Committee created by this bill (as Robert Reich described the bill:  "No tax increases on rich yet almost certain cuts in Med[icare] and Social Security . . . . Ds can no longer campaign on R's desire to Medicare and Soc Security, now that O has agreed it").

Last night, John Cole -- along with several others -- promoted this weak-helpless-President narrative by asking what Obama could possibly have done to secure a better outcome.  Early this morning, I answered him by email, but as I see that this is the claim being pervasively used to explain Obama's acceptance of this deal -- he was forced into it by the Tea Party hostage-takers -- I'm reprinting that email I wrote here.  For those who believe this narrative, please confront the evidence there; how anyone can claim in the face of all that evidence that the President was "forced" into making these cuts -- as opposed to having eagerly sought them -- is mystifying indeed.  And, as I set forth there, there were ample steps he could have taken had he actually wanted leverage against the GOP; the very idea that negotiating steps so obvious to every progressive pundit somehow eluded the President and his vast army of advisers is absurd on its face.

Here's The New Republic's Jonathan Cohn -- who, as he says, with some understatement, is usually "among [Obama's] staunchest defenders in situations like these" -- on what these guaranteed cuts mean (never mind the future cuts likely to come from the Super Committee):

As Robert Greenstein, of the Center on Budget and Policy Priorities, pointed out in a recent statement about a different proposal, there’s just no way to enact spending reductions of this magnitude without imposing a lot of pain. And contrary to the common understanding in the Washington cocktail party circuit, “pain” does not simply mean offending certain political sensibilities. Pain means more people eating tainted food, more people breathing polluted air, more people pulling their kids out of college, and more people losing their homes -- in other words, the hardships people suffer when government can't do an adequate job of looking out for their interests.

As I wrote back in April when progressive pundits in D.C. were so deeply baffled by Obama's supposed "tactical mistake" in not insisting on a clean debt ceiling increase, Obama's so-called "bad negotiating" or "weakness" is actually "shrewd negotiation" because he's getting what he actually wants (which, shockingly, is not always the same as what he publicly says he wants).  In this case, what he wants -- and has long wanted, as he's said repeatedly in public -- are drastic spending cuts.  In other words, he's willing -- eager -- to impose the "pain" Cohn describes on those who can least afford to bear it so that he can run for re-election as a compromise-brokering, trans-partisan deficit cutter willing to "take considerable heat from his own party."

UPDATE:  Scott Lemieux writes to partially disagree with my argument here, but -- except for his description of Obama as a "moderate Democrat" (I think Krugman's "moderate Conservative" is more accurate) -- I don't really disagree with anything Lemieux wrote.  Of course the fact that Obama wanted spending cuts does not preclude his having also made negotiation mistakes along the way.  But my point is a more general one: for a long time, the standard progressive narrative was that Obama wanted a clean debt-ceiling hike but was being forced (by the Tea Party and bad negotiating) into unwanted budget cuts.  The evidence -- beginning with Obama's own repeated statements -- is that that's just not true: he affirmatively wanted these cuts and more as part of the debt ceiling hike.

On a different note, I am quite certain that VastLeft has captured, in cartoon form, exactly what the rhetorical strategy will be for dealing with liberal anger over this deal (click on image to enlarge):

Or, as Charles Davis put it in a different context: "Remember when Michele Bachmann killed all those innocent people in Afghanistan, Pakistan, Yemen, Iraq and Libya? Ugh. Hate her."


UPDATE II: Matt Taibbi writes on whether Obama is actually a "weak negotiator":

Now, Barack Obama has surrendered control of the budget to the Tea Party. . . . Commentators everywhere are killing the president for his seemingly astonishing level of ball-less-ness. . . . The Democrats aren't failing to stand up to Republicans and failing to enact sensible reforms that benefit the middle class because they genuinely believe there's political hay to be made moving to the right. They're doing it because they do not represent any actual voters. I know I've said this before, but they are not a progressive political party, not even secretly, deep inside. They just play one on television. . . .

The Democrats, despite sitting in the White House, the most awesome repository of political power on the planet, didn't fight at all. . . . We probably need to start wondering why this keeps happening. Also, this: if the Democrats suck so bad at political combat, then how come they continue to be rewarded with such massive quantities of campaign contributions? When the final tally comes in for the 2012 presidential race, who among us wouldn't bet that Barack Obama is going to beat his Republican opponent in the fundraising column very handily? At the very least, he won't be out-funded, I can almost guarantee that.

And what does that mean? Who spends hundreds of millions of dollars for what looks, on the outside, like rank incompetence?

It strains the imagination to think that the country's smartest businessmen keep paying top dollar for such lousy performance. Is it possible that by "surrendering" at the 11th hour and signing off on a deal that presages deep cuts in spending for the middle class, but avoids tax increases for the rich, Obama is doing exactly what was expected of him?

A mere three years ago, huge numbers of people invested substantial time, attention, energy, emotion and "hope" in fighting to put Barack Obama in the White House.  The very human incentives not to reach this conclusion are both obvious and overwhelming.