The teenage singer gets a tiny tattoo, but makes a big gesture 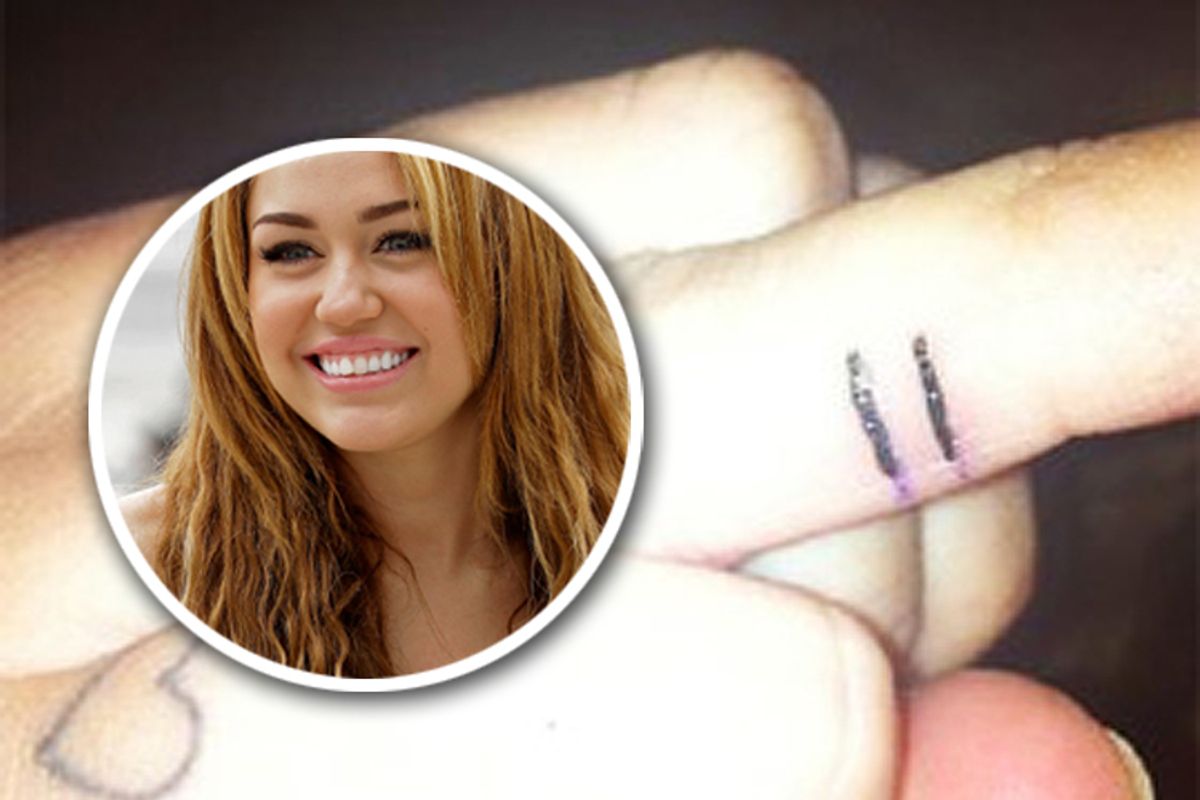 Disney Princess. Bewigged pop star. Occasional salvia indulger and lap dancer. And increasingly, outspoken champion of gay and lesbian rights. Miley Cyrus -- who knew the girl had such gumption? Welcome to her summer of LGBT love.

Two months ago, the 18-year-old singer got in a Twitter tiff with a fellow Tennessean over "moral values" and declared she's "not gonna be a closed-minded hypocrite," before ripping into Rick Santorum and his acolytes, including "SHADYASHELL" Urban Outfitters. And last month, after the Casey Anthony verdict, she was railing on Twitter that "You know the world is skewed when people get away with murdering children but we cant get gay marriage legalized in the state of California."

Now, Cyrus has expressed her feelings a little more permanently, flaunting an equality tattoo on her ring finger and tweeting this weekend that "All LOVE is equal." And when a Christian fan took offense, she promptly snapped, "where does it say in the bible to judge others? Oh right. It doesn't. GOD is the only judge honey. GOD is love."

Cyrus has been getting inked almost as long as she's been singing. She has several other tattoos, including a "Just breathe" motto under her ribcage in honor of a friend who died of cystic fibrosis. And adorned on her fingers like little rings, she has a heart, a peace sign, the word "karma," and more. Now this. A tattoo is not exactly the world's most articulate statement of support for a cause, nor is it always the wisest long-term way to express your feelings. You've got to wonder if she had to do it all over again, if Kat Von D would get Jesse James' face plastered on her ribcage. Yet there's something undeniably, sweetly sincere -- and unmistakably youthful -- about hopeful solidarity nonetheless.

To superficial observers, Cyrus has long appeared just another prefab teen pop star, an artificial creation designed to sell lunch boxes. But Cyrus has long bucked that image, sometimes with truly terrible music videos and sometimes by taking genuine creative and personal risks. Her outspokenness about LGBT rights and in particular, same-sex marriage, set her apart from the usual pack of bland young celebs too afraid of alienating their fan base to take a stand on anything.

It's easy for those of us who are older and who inhabit the Godless Sodoms of America to take for granted something as seemingly innocuous -- and frankly crudely done -- as two little lines on a ring finger. But for Cyrus, it's something else. She's not Gaga, with a more adult and sophisticated image and audience. And though the sexy dancing at the Teen Choice Awards might be vaguely scandalous, it can be a real career game-changer for a girl to risk alienating a mighty Christian and conservative fan base. Cyrus is aware of this -- in 2009 she took a Twitter sabbatical, in part, she says, because of the anti-gay hostility she found aimed at her there. And sure enough, she has bashers criticizing her today for "supporting a perverse life style."

Yet bless her young heart, she's still at it. Her gestures may still seem clumsy, but here's a reminder -- it's impossible to have it all figured out neatly at 18. And maybe those two lines on the finger of one teenage girl don't seem like a whole lot toward the cause of equality, but it's a gesture of support nonetheless. More important, it's a challenge -- not to the hipsters and the already liberal, but to the little girls who like to Party in the U.S.A. To fans who consider themselves Cyrus' fellow Christians. If it plants a notion in those heads, if it makes fans who hadn't considered LGBT rights before have a conversation about it and open their minds, then it's a little tattoo that makes a big statement.