Yes, he got almost nothing out of this deal. But let's consider the harsh political realities he was up against 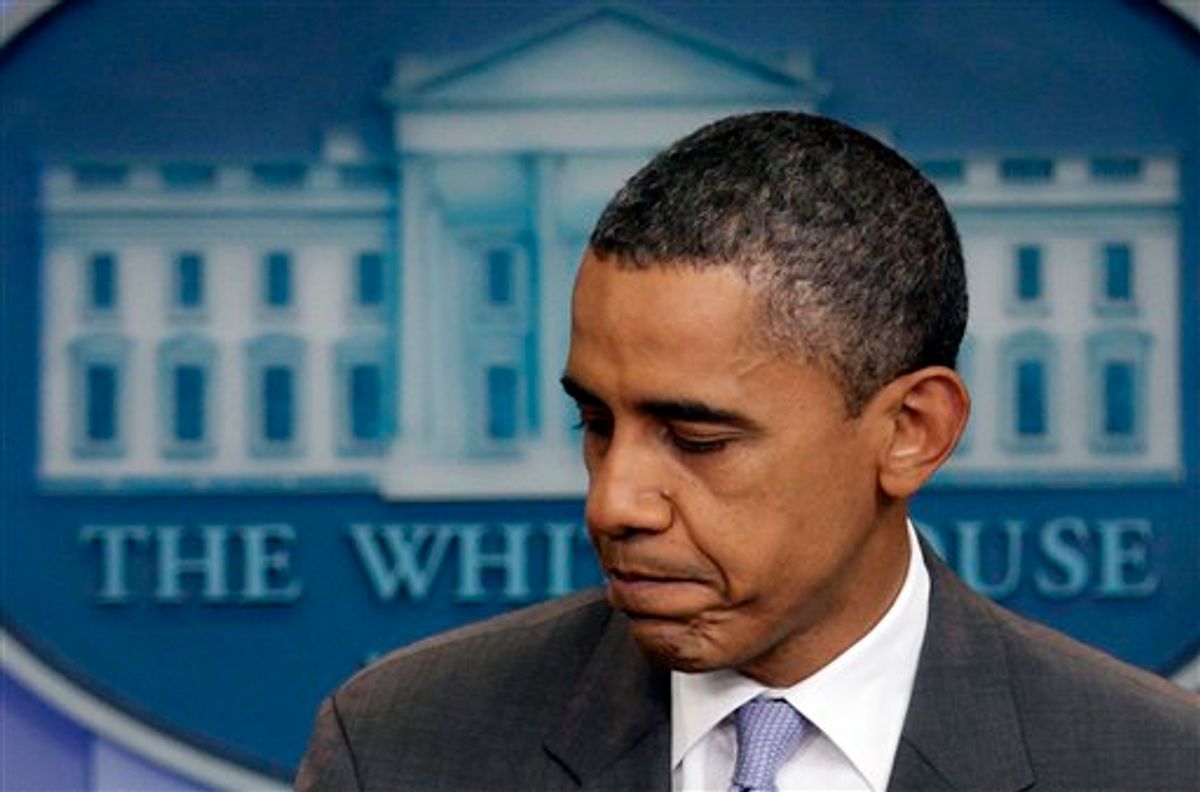 This originally appeared at Presidential Power

In his first public comments since the budget agreement (at least the first that I have heard or read), a somber President Obama went on national television Sunday tonight to issue a short statement in which he urged Republicans and Democrats to sign off on the debt deal under consideration in both congressional chambers. The question now is whether Harry Reid and John Boehner can rally their party caucuses to support this -- already there are signs that some Republicans are worrying about the impact on defense if the Congress can’t support the joint committee’s recommendations next November. That failure will activate the debt "trigger," including automatic cuts in defense spending. We’ll know more Monday about whether the agreement will hold, after both caucuses are briefed and, presumably, a vote will follow.

In his televised remarks Obama looked, in a word, beaten -- understandably so. He was quite candid in admitting that this was not the deal he wanted -- indeed, it may not be the deal anyone wanted, but it does avert a debt shutdown, and, as he noted, it leaves open the faint possibility that further refinements can happen between now and November. But make no mistake about it: In terms of budget policy, Obama won almost nothing here. Most significantly, there was nothing gained on the revenue side -- not even a closing of tax loopholes favoring the "oil companies" and "CEOs flying corporate jets" that figured so prominently in his call for a "balanced" solution to the debt crisis. (Hint: those "refinements" will not include tax hikes in the 14 months before a presidential election.)

Predictably, although the ink is not yet dry on the debt agreement -- indeed, there’s no ink even on the legislation -- Obama is getting crucified on left-leaning blogs, amid headlines suggesting the Right won (see also comments here), with charges that he was outmaneuvered -- that he caved. Let me briefly take issue with the prevailing political sentiment among Obama’s Democratic base. Since the day Obama was elected (indeed, even before he was elected!) I’ve detected what I believe to be a completely unrealistic, emotion-driven faith among his hard-core supporters that he was different from other politicians -- that he could somehow overcome the political constraints and institutional barriers that have limited the power of all his presidential predecessors. I saw it in the debate regarding Guantanamo, military commissions, the public option, Afghanistan, extending the Bush tax hikes and now this. This sentiment was perhaps never more manifest than in the fervent belief among some that he was playing a "deep" game during these negotiations, maneuvering to a position where he could cut the Gordian knot of budget impasse with a master stroke (14th amendment anyone?). And in this latest occurrence, when he failed to fulfill these outlandish expectations, his erstwhile supporters proceeded to blame it on a character defect -- a lack of fortitude, an absence of courage, or perhaps simple political naivety.

The reality is that this budget outcome had nothing to do with personal weakness, and everything to do with political weakness. Obama is fighting for his political life. Right now he’s in Jimmy Carter territory -- his approval rating is the lowest it has ever been, the economy shows no signs of recovery (indeed, it may be getting worse), the House is occupied by an opposing party energized by newly-elected representatives convinced they have been sent to Washington to do God’s work by cutting spending, and I haven’t even begun discussing foreign affairs. And, given that he has less than 14 months to turn it around, and that presidents are held responsible for the nation’s economy, he wasn’t going to start that political recovery by watching the government default on its loan obligations. Given this context, the idea that this president was in a position of political strength during these budget negotiations is pure fantasy. Indeed, it should be the Tea Party members who are mad -- in all likelihood they could have forced a balanced budget vote as part of the package. Where’s the outrage at Boehner? Isn’t he the one who caved?

My point is simple. Obama had two imperatives during this fight: prevent a default and get this issue off the table until after 2012. Period. To achieve that he would have gone as far Right as the Democratic Left would allow. And, in the end, he pretty much did and he accomplished his two objectives.

In short, this is probably the best deal Obama was going to negotiate. It’s not like he didn’t try to get revenue increases on the table -- in fact, he rejected the original Boehner deal because it didn’t have enough revenues. In the end, Obama didn’t have the political capital to leverage anything else from the House Republicans. (Amazingly, there is a cadre of hard-core activists including Democratic legislators who are, tonight, still urging him to invoke the 14th amendment!) I’m not saying Obama handled this flawlessly, although I’m hard-pressed to point out obvious specific errors. But the result was always likely to come out pretty much where it did, when it did. I said as much, weeks ago.

Maybe some of you can tell me why so many very smart people have, since the day Obama was inaugurated, deluded themselves into thinking that this admittedly very smart man, albeit one with limited political experience at the national level, was somehow going to step into office and proceed to rewrite the political laws that have governed presidential politics for the last two centuries?

Matthew Dickinson is a professor of political science at Middlebury College. He taught previously at Harvard University, where he also received his Ph.D., working under the supervision of presidential scholar Richard Neustadt.